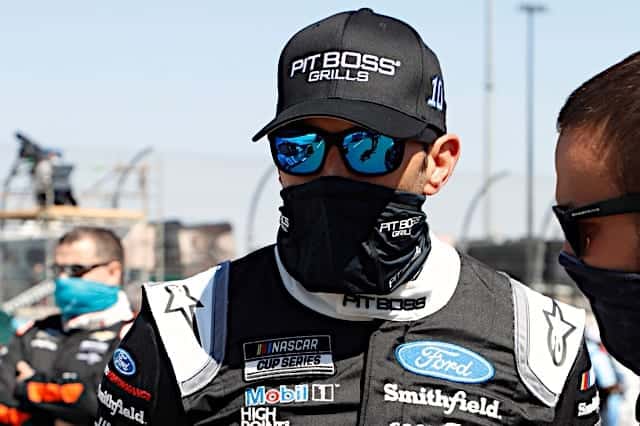 The last time a Hendrick Motorsports car visited victory lane at Richmond Raceway, it was the fall race in 2008, and Jimmie Johnson took the checkers in the No. 48 en route to his third consecutive NASCAR Cup Series title. The No. 48 was the winning car once again after that nearly 13-year drought, but this time it was Alex Bowman taking the car to the winner’s circle for his third career win.

Bowman, who turns 28 next Sunday (April 25), only led 10 laps, but that was more than enough. He took the lead after a three-way battle with Joey Logano and a dominant Denny Hamlin to pull away quickly. And he needed every inch of that lead as he fought lapped traffic to keep a charging Hamlin in his rearview. If there had been another lap or two, the outcome might have been different, but that’s not how the game works, and Bowman came away the winner.

Honorable Mention: If anyone needed a good finish on Sunday, it was Aric Almirola. Almirola had yet to crack the top 10 entering the weekend, failing to finish three of the first eight races and posting just two finishes better than 20th.

Almirola shook off some of the bad luck Sunday, and he was in position to capitalize on the final Richmond restart.  He couldn’t run with the leaders but finished sixth, a welcome result after his difficult start. And with that little bit of momentum on his side, the series heads to Almirola’s best track next week, Talladega Superspeedway. A turning of the tide could be on the way.

While the Cup crowd was busy racing at Richmond, a familiar face was making his NTT IndyCar Series debut. Johnson started 21st and finished 19th in the first race of his rookie season. The seven-time Cup champion avoided an early melee but spun on his own 10 laps in. Johnson was able to continue, though he finished three laps down to the leaders.

But that’s not the real story. If you’ve paid attention to Johnson’s weekend, it’s hard not to note how much fun the 45-year-old is having. From his blinged-out pre-race outfit to the smile he’s had on his face, it’s a look back at how Johnson was as a youngster in NASCAR. Or, rather, how he would have been if he wouldn’t have been over-handled early on and allowed to show those true colors more often. Maybe you can recapture lost youth.

Polesitter Martin Truex Jr. led 107 laps and looked like a contender until a speeding penalty with just over 100 laps to go sent him to the back of the pack. Truex came back to finish fifth, but a third win of 2021 slipped away with his pit road mistake.

Point leader Hamlin dominated much of the day, leading 207 laps. Once again, Hamlin held point on a final restart, in position to win but couldn’t hold off Bowman’s charge. Hamlin has led 694 laps all told in 2021, more than 300 more than Kyle Larson, who’s next on the list, but has no win to show for it yet.

Defending champion Chase Elliott didn’t have the same magic as his winning teammate and toiled to a 12th-place finish after a lackluster day. His race was incident-free, but Elliott and teammate Kyle Larson didn’t have the speed that Bowman and William Byron (finished seventh) had. Hendrick Motorsports has always struggled to keep four cars on an even plane and those woes don’t appear to have gone away for good.

Most recent Richmond winner Brad Keselowski had a fast car, but a gamble on strategy cost him in the end. While most teams pitted twice during stage two for fresh tires, Keselowski elected to make the run on just one stop, and the field promptly steamrolled him with fresh rubber. Keselowski lost a lap before the stage was up and never really recovered, finishing 14th on the day.

Richmond is, by definition, a short track. But in recent years it rarely produces the kind of racing or fireworks that fans are used to at Bristol Motor Speedway or Martinsville Speedway. While the same drivers often do well at Richmond as on the other short tracks, the races don’t produce the same level of excitement. D-shaped Richmond races more like a tiny cookie-cutter track these days than it does a true short track, with clean air and aerodynamics playing a much greater role than at on the ovals.

Whether it’s the track surface, the cars, or aero dependence, Richmond’s races have become lackluster in recent years. And while an afternoon race produced a better show than a night one, it still paled in comparison to last week at Martinsville.

That’s not saying there need to be wrecks. But there needs to be more hard racing and excitement, maybe a little rubbing (rubbing is, after all, racing). It was a better show than say, Kansas Speedway or Texas Motor Speedway or similar, but it’s not in the same league as the other short tracks right now.

The battle for the win was a good one, saved by the late restart, but it didn’t quite feel like enough to make up for the overall feeling that something was missing.

After three straight weeks of short track racing, the Cup Series heads to big, bad Talladega Superspeedway. If there was a lack of action at Richmond, there certainly won’t be next week.

Superspeedway races have become less about skill and strategy and more about avoiding carnage in recent years, so expect the winner to be someone who is in the right place at the right time when the Big One breaks loose.

Generally, that means someone who’s leading the pack when it all goes down behind him. Sometimes, it’s a driver who hangs back and lets the melee happen, then blindsides the leaders.

Superspeedway racing is an equalizer, a stage for drivers who often play a supporting role to shine. Just ask Michael McDowell, who took the Daytona 500 earlier this year.  Will we see another underdog come out as top dog on Sunday?

NASCAR has played around with stage lengths at a few tracks in hopes of avoiding long green-flag runs at the end.  And while that’s absolutely the wrong reason to do it, the idea itself has merit.

The long middle stage forced teams to make a decision: pit once and lessen the risk of a pit road penalty or incident, or pit twice for fresh tires on a track that was grinding them up and spitting them out.

That’s how it should be.  Races shouldn’t allow teams to play it safe, or to use the same strategy in consecutive stages. Not only should they be vastly different lengths, but different stages should be longer or shorter at different tracks. Some should come with a long first stage, then short second and third. Other places can have a longer run in the middle as we saw at Richmond. Then there should be tracks that have a long run — or a sprint — to the end. Tracks with two races should also have completely different splits each time.

Teams should have to constantly make decisions and adapt to the races. That’s what the top level of NASCAR competition is all about.