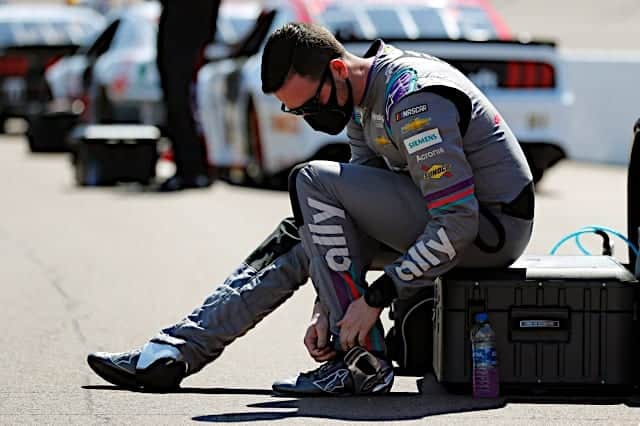 On the day (April 18) when Jimmie Johnson ran his first IndyCar race, it was only fitting that Alex Bowman brought the No. 48 car back to victory lane.  Bowman emerged as a surprise winner at Richmond Raceway, a track where he had never had a top-five finish.  His 2021 win was the first for Hendrick Motorsports’ No. 48 team since Johnson’s final points paying win at Dover in June 2017.

When Johnson announced that he would step away from full time competition in NASCAR at the end of the 2020 season, speculation ran wild for nearly a year about who would be the No. 48’s next driver.  Kyle Larson wound up as the new hire at HMS, filling the void to drive Johnson’s old team.  But it was Bowman’s No. 88 car that received a rebranding over the offseason with Johnson’s old number and sponsor, Ally.  Just as Bowman replaced Dale Earnhardt Jr. when he arrived at Hendrick’s team, he would have to step up to fill the shoes of another NASCAR icon.

Suffice it to say that Bowman has had a rocky start to the year.  The No. 48 has never really lacked speed; Bowman started off by winning the Daytona 500 pole.  But until Sunday’s race, he had not been getting the finishes to match.  He got wiped out in the lap 15 Big One at Daytona.  At Las Vegas Motor Speedway, a flat tire in the closing laps spoiled a good run.

Bowman also had strong cars in both of the previous short track events at Bristol Motor Speedway and Martinsville Speedway.  Both races, though ended in frustration.  While Bowman was right at home on Bristol’s dirt surface, a transmission issue and crash damage prevented him from challenging for the win.  Two weeks later at Martinsville, Bowman had to pit under green for a loose wheel.  Stuck back in the pack, he ultimately got collected in the big crash on lap 387 that blocked the entire backstretch.  The No. 48 slammed into the back of Michael McDowell, causing serious nose damage.  Bowman was done for the day.

It felt like Sunday’s race was going to play out in similar fashion for the snake-bit Hendrick driver.  After starting 24th, Bowman steadily worked his way forward, placing within the top 10 in both stages.  But while putting during the stage two caution, the No. 48 received an uncontrolled tire penalty, sending Bowman to the back of the line for the restart.  From that point on, Bowman’s chances for a strong finish looked bleak.  There was too much ground to make up with too little time left, and it didn’t help matters that Denny Hamlin, Joey Logano, and Martin Truex Jr. were in their own zip code as the race wound down.

But this time, Bowman would get another chance after working through traffic back into the top-five cars.  Kevin Harvick’s crash on lap 381 brought the field back together, erasing a gap for Bowman of nearly half-a-lap behind the leader.  Lining up third on the following restart, Bowman stuck to Hamlin’s back bumper like glue, sliding past the No. 11 with 10 laps to go to make the decisive pass.  Bowman drove off to the third win of his career and likely punched his ticket to the playoffs.

After the race, Bowman was quick to honor his Hendrick Motorsports teammates.  Among them was former HMS crew member Rowdy Harrell and wife Blakley, who died tragically in a car accident over the offseason.

“First and foremost, (I) gotta thank Ally, Chevrolet, everybody at Hendrick Motorsports,” Bowman said.  “This one’s for Rowdy and his family, (we) miss him and Blakley every day, but it just means the world to be able to win for Ally, and it’s definitely emotional, obviously, with how hard the offseason was on us.  So, (I am) appreciative of the opportunity and we’ve got more races to win this year.”

Racing with Hendrick Motorsports always comes with expectations.  Driving the No. 48 car that Johnson made famous only adds to that weight.  The long winless drought at the end of Johnson’s NASCAR career was obviously not indicative of the No. 48 team’s heyday.  In his prime, Johnson found every way imaginable to beat the competition.  And on the rare occasions when he or the team did make mistakes, Johnson found ways to battle back from adversity.  You don’t become a seven-time Cup Series champion without learning to overcome.

Bowman’s win on Sunday was straight out of the Johnson playbook.  Even though the No. 48 team encountered trouble once again, they did not take themselves out of contention.  Bowman kept his car on the lead lap while Hamlin was slicing his way through the field.  During the last pit stop, the crew performed well and made some necessary short-run adjustments to get more competitive.

Then, when faced with challenging NASCAR heavyweights like Hamlin and Logano, Bowman didn’t blink when it came time to win the race.  It was a superb drive right when the No. 48 team needed one.  But Bowman’s thoughts after the race went directly to his crew and the opportunity that they gave him.  Just like Johnson, he was gracious in victory.

Of course, Johnson did nothing better during his career than dominate the playoffs.  It still remains to be seen if Bowman can take after Johnson in that regard.  He did an admirable job in the 2020 postseason, earning seven top 10s and no finishes worse than 16th.  Those efforts resulted in a career best sixth place finish in the final standings.

This year, a few more playoff points, or trips to victory lane in the postseason, would go a long way toward making Bowman a true title contender.  But Sunday’s win was a step in the right direction.  Never before has the 27-year-old looked more like a fitting heir to Johnson’s ride.  We will see if he can make good on his postrace promise that the No. 48 team has more races to win in 2021.