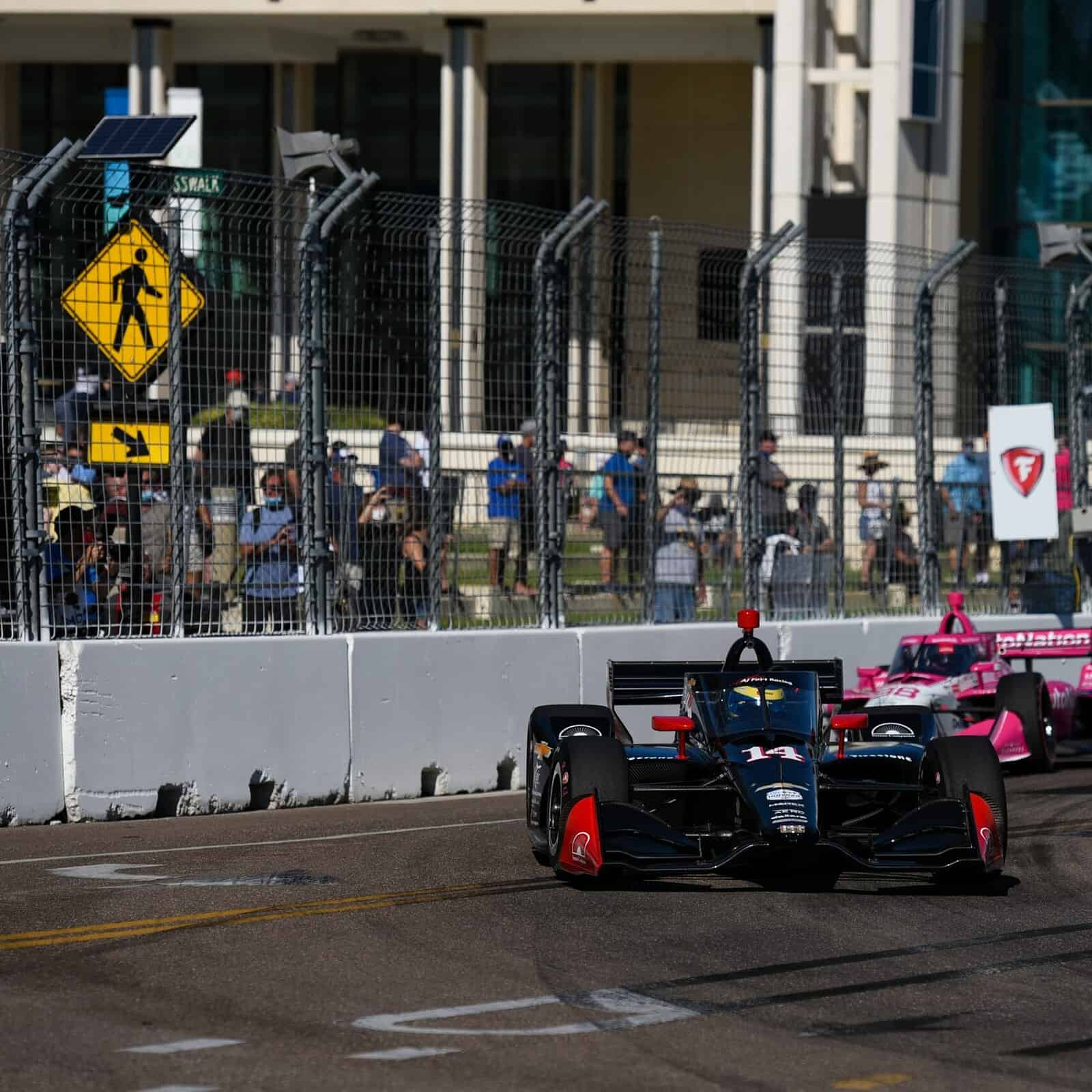 A street circuit with an airport runway for a main straightaway makes for an interesting technical challenge for race engineers in the NTT IndyCar Series.

At 1.8 miles long with 14 turns, the track boasts a scenic view of many yachts along with a few passing opportunities.

Sebastien Bourdais has won twice at what has become his home track. After growing up in Le Mans, France, Bourdais has made his U.S. home in St. Petersburg with his wife and kids. For 2021, the four-time Champ Car champion has a new home at A.J. Foyt Racing with Justin Taylor as his race engineer.

Taylor hails from Denver, Colorado and worked for the Audi factory LMP1 program before joining Ed Carpenter Racing in 2017 to engineer J.R. Hildebrand and then return to sports cars.

Bourdais and Taylor delivered a fifth-place finish in the season-opening race at Barber Motorsports Park and are looking to add a 2021 victory to Bourdais’ wins at St. Petersburg from 2017 and 2018.

“He’s had good results [at St. Petersburg], so for us there’s no excuses to not have a good result, if you know what I mean,” Taylor said. “It is sort of his hometown, I’m sure he’s got some more devoted fans that are going to be coming there so we’ve got a little bit of that. But mainly it’s that he’s done well there in the past, so we know he’s capable and we should have no excuse at the end of the day to not make it happen.”

Let’s look at some of the unique challenges a street circuit provides. Unlike a standard road course, teams can’t exactly test at a street circuit, so they have to make do with testing at bumpy circuits that can only simulate city streets. Many teams test at Sebring for this exact purpose.

Sebring cannot simulate one thing, however, and that’s city street paving inclines. City streets are paved with the middle of the road acting as a high point and the lanes are slanted away to look like the ^ symbol, while road courses are not paved in such a way. This allows for rain to drain off of roads instead of puddling up.

“[Sebastien] will pick the right lines that will be able to allow us to run the car as low as possible and try not to cross over the crest in the road at the wrong times,” Taylor added. “The street courses are a whole lot bumpier than your permanent road courses, so we’ll oftentimes have a different philosophy on the mechanical setup and particularly the damping than we would at any other track.”

A common characteristic of all street circuits are the multiple 90-degree corners that come from parts of the course being laid out on a city grid. While there are several of those corners, the more critical non-90-degree corners are near the beginning and end of the lap.

Turn 14 is the last half of the hairpin turn that leads onto the runway making up the main straightaway. Getting a car through that turn will enable a driver to overtake other competitors going into the first corner.

“Going into turn 1 is where you’re going to get most of your passing done, so we do focus on having a good drive out of the last corner,” Taylor said.

Taylor also brought up turn 10 as a prime spot to nail the setup for. Turn 10 is a fast left hander on the back side of the circuit leading onto Dan Wheldon Way and the fast chicane at turns 11 and 12. The corner comes after a mostly flat-out run alongside the waterfront, so a driver can gain a lot of momentum on the car in front in order to overtake them.

“That’s another decent place to get some passing done,” Taylor said of turn 10. “But it’s also one of the most loaded left-hand corners, so we do kind of focus some of our setup work on that corner.”

Watch out for those concrete barriers Jimmie.. that place is tight.

Any chance he gets through practice and qualifying without crashing?