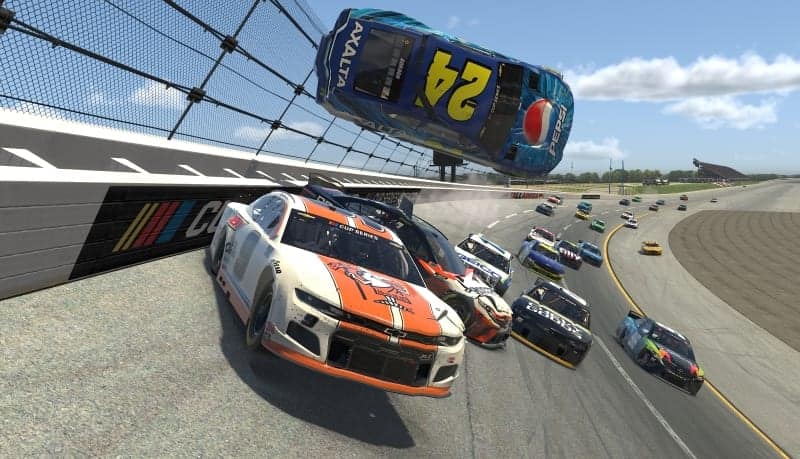 When you think of a second-generation NASCAR driver, you probably don’t think of the name “Harvick”.

That will change Wednesday, April 21.

Among them is Keelan Harvick.

The eight-year-old son of 2014 NASCAR Cup Series champion Kevin Harvick will be on the same virtual high banks as his father, along with 38 others representing the best in stock car racing. The real-life go-kart racer is on the entry list as the driver of the No. 62 for the iRacing feature televised on FOX Sports 1.

Dale Earnhardt Jr. will return in the No. 88 after failing to qualify in the season-opening event race on the Bristol Motor Speedway dirt surface, as he has been given a Promoter’s Provisional.

Timmy Hill returns as well, using the Pro Invitational Past Winner Provisional, thanks to his victory at virtual Texas Motor Speedway last year. This time, instead of sitting in for Brad Keselowski in the Team Penske No. 2 following his initial exclusion, Hill will be sporting his usual No. 66 MBM Motorsports entry.

Clint Bowyer also returns in the No. 79 entry with a Promoter’s Provisional.

Part-time NASCAR Xfinity and Camping World Truck series driver and NBC Sports analyst Jesse Iwuji won the Fan Vote Award and will be participating in the No. 99 entry.

Kurt Busch and Chase Briscoe will be participating in a tire test at Nashville Speedway and will not be able to compete on Wednesday. (UPDATE: As of Wednesday morning, Briscoe is now entered in the event.)

Christopher Bell will have Joe Gibbs Racing teammate Ty Gibbs on standby to wheel the virtual No. 20 Toyota. The rest of the entries will comprise of Cup teams who own a charter, which guarantees them a starting spot on the grid each week.

Ryan Preece, whose full-time No. 37 JTG Daugherty Chevrolet doesn’t have a charter, will not be a part of the event. Preece was in the season opener because he filled in for Kevin Harvick.

Be sure to order one when they go up!

P.s. My $ is on @KeelanHarvick

Better yet, is there a side bet for him to beat @KevinHarvick ?

Coverage for the virtual event will begin Wednesday, April 21 at 7 p.m. ET on FS1.

Maybe Keelan can get Jennifer’s ride in Cup this weekend.

go Keelan!!!! this kid has been winning on the kart series. he’s got broken wrist right now but that won’t stop him. be interesting to see how he runs with the guys tonight.

Maybe a Harvick might actually win a race lol id bet on Keelan before I would Kevin!! 2 words washed up….at least He we t out on top winning 7 races in his last 2 full seasons, Harvick gonna end up racing for a no name single car team and look terrible before he retires although the wife just reminded me he already looks terrible driving for one of the big 4 teams so outta all downhill from here for Kevin if u can’t tellI I’m not a Harvick fan since he tried to pick a fight with Rowdy at Darlington and his car ended up in the pit road wall courtesy of the 18! that was awesome he walked right into Kyle’s trap to get kevin out of his car long enough to punt it into the wall haaha!???????. Go Kyle, go Truex Jr, and “hit the wall Harvick” I hope he finishes but I hope he’s laps down, that looks worse than not finishing at all for me anyway lol, the same for Chase Elliott, met him at Ky Speedway and he was a stuck up jerkface! He tried to charge 25$ to sign a t shirt and wasn’t even at an official autograph session! he was walking to a food vendor not even in his fire suit, I’ve been around NASCAR and most of the tracks all my life and never been treated like that by anyone that has anything to do with NASCAR he’s no Dale Sr or Jimmie Johnson but acts like he’s the king of the track. He may have won here and there and a Championship but going by his attitude he is not worthy of that recognition, he’s got a lot to prove before he gets there, just because of his last name he thinks that gives him the golden key to be an ass.

I meant at least Dale Jr went out on top sorry for the typo!?

And I meant even driving for a big 4 team (Hendrick Motorsports, Joe Gibbs Racing, Penske Racing, and Stewart-Haas Racing it’s gotta be downhill for the #4 Stewart-Haas Racing driver, he’s shown no signs this year of completing and finishing a race in the # 1 Position, top 5s and 10s are useless when there have been no repeat winners this season, plain and simple he needs a win to get in!

Keelan Is going to beat Dale. Im so happy that thier lettin Timmy race in the 66 car.

Idk about beating Jr, but I believe he will do well, better than he’s expected to do, he said his goal is just to finish the race, I think he will do ALOT better than just finish, look for a top 10 and very possibly a top 5! I think to beat Jr, your gonna have to win this one it was one of his best tracks thats why he is racing Richmond in Xfinity this year it was one of his best tracks and it was his favorite track overall!????

I JUST WISH KEVIN HARVICK WOULD RETIRE!! I would hate to see him go out like a chump, I may not like him but I respect him for what he does, for his talent and willingness to literally put his life on the line every time he gets behind the wheel in any series, I have driven a cup car that was raced in the Daytona 500 in the mid 2010s and it’s not just jump in and turn left! The splitter can’t be dragging, the suspension had to be perfect, I had to hit my shifts perfectly, I drove at My Speedway pre reconfiguration, the bumby version lol, and my ads end was all over for 2 or 3 laps, when the announcers talk about not having grip in old tires, what they usually don’t say is there is a fine line between having a little more grip in new tires and no grip in old tires, I found out the difference real quick after 3 laps I lost .7 seconds of speed per lap and that was new tires once you hit 10- 12 laps on your tires, you feel like you are driving on ice at 190mph it’s amazing how quick some of these tracks eat up tires, remember the Brickyard when we had a caution literally every ten laps to check tires for safety I’ll bring up a short article for y’all it was 2008.

Neither Goodyear nor NASCAR could find a solution in time for race weekend. Instead, NASCAR mandated “competition cautions” for every 10 laps of the 160-lap race. This practically ensured that the race would become a grind, but it was the only way to guarantee the safety of the drivers while not canceling the event.