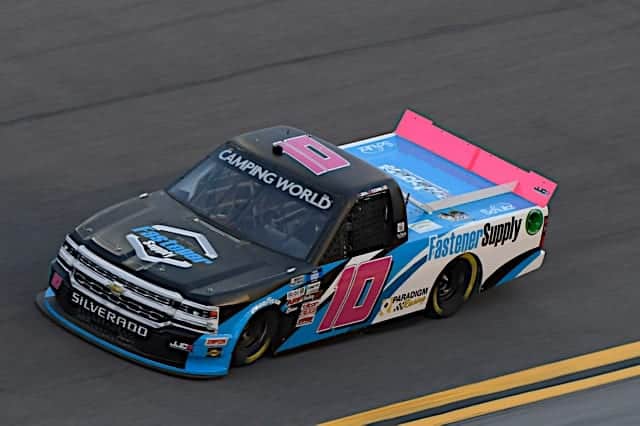 Why did NASCAR not approve Jennifer Jo Cobb to race in the Cup Series at Talladega Superspeedway this weekend? I know they put out their reasoning, but I still think it’s a bit unfair. – Shiela P., Little Rock, Arkansas

For those who don’t know NASCAR’s reasoning, here it is.

Jennifer Jo Cobb not approved to run Cup at Dega.
–NASCAR: Decision based on performance/quality.
–NASCAR has been more stringent w/ recent Cup approvals.
–She was yrs ago OK'd for Cup but if don't run in series for a yr, must get re-approved.
–NOT result of Richmond-Norm

I disagree vehemently with this decision and said as much when it came out.

I'm all for a more stringent process but it's hard to look at guys like Derrike Cope and Bill Lester who hadn't A). Been competitive or B). Been driving in NASCAR for YEARS (among others) be approved & JJC is axed.

I disagree with the decision but my opinion means nothing, so ??‍♂️ https://t.co/K7mufCsFbb

First and foremost, the decision was based on performance/quality on track. Cobb has 217 career Camping World Truck Series starts and has only finished on the lead lap 11 times. One would look at that and say, “Huh, doesn’t seem like she has much performance.”

And they’d be right. She’s with an underfunded, small team and has been for the entirety of her Truck Series career. But with 11 national series starts at the very track she would be debuting at in the NASCAR Cup Series (and a clean track record, for the most part), it seemed like a no-brainer that she’d get approved.

NASCAR being more stringent with the approval process is a very good thing. Brad Keselowski was openly candid about Quin Houff being approved to run Cup full-time last season after his Texas Motor Speedway debacle, and he’s right. There needs to be more of a formal, transparent, understandable and reasonable process for drivers to get approved to run in any series, especially the premier one.

… But Derrike Cope at 62 years old, who hadn’t competed in a Cup race in two years and hadn’t run a full-time Cup schedule since 1995 (!), was approved in the very same car as Cobb (the No. 15 for Rick Ware Racing) to run at basically a Talladega carbon copy track in the biggest race of the year, the Daytona 500? That ain’t it, chief. Not for me.

Cope, you might remember, was the car putting around on the apron as the field flashed by in the second Bluegreen Vacations Duel, which took place the Thursday prior to the 500.

Cope crashed on lap 3 and finished dead last, 197 laps down, by the way, in the Great American Race.

Or how about Bill Lester, who hadn’t made a NASCAR start of any kind in almost 15 years, but came back with no problem whatsoever for the Truck race at Atlanta Motor Speedway with David Gilliland Racing (finished 36th, seven laps down)?

I’m not saying Cobb would have gone out and won the race on Sunday. Heck, she probably would have finished in the 30s, multiple laps down and been a complete non-factor. But that’s not the issue here. The problem for NASCAR is consistency.

Cobb is an experienced racecar driver who would’ve done no worse than Cope, Lester or any other driver who has been approved for their Cup debuts/NASCAR returns. And becoming the first woman since Danica Patrick in 2018 to race in the premier series would’ve been a cool storyline, especially in the midst of the sanctioning body’s push for diversity and inclusion.

But alas, it’ll have to wait for JJC. Let’s just hope she gets the opportunity she deserves … eventually.

Is it time for Chase Elliott to worry? His three teammates have won, and he’s still winless, despite being the defending champion. – Rick P., Hampton, Georgia

Absolutely not. Elliott will win multiple races this season, easily, and probably will dominate at least two or three road courses coming up in the summer months. Theres’s six more road courses on the schedule, and Elliott winning at least one of them should be the lock of the century.

Brett Griffin hypothesized on Door Bumper Clear this week that the No. 9 team may be hiding their full potential at the moment, knowing that they can and will turn it on when it matters (like they did last year at Martinsville Speedway and Phoenix Raceway). I’m not sure if I subscribe to that notion, but there is a part of it that could be true for crew chief Alan Gustafson.

See also
5 Points to Ponder: Hendrick Snaps Richmond Drought
Hendrick Motorsports had a great year in 2020 but played their poker hand late, holding the right cards at the right time in out-strategizing everyone down the stretch.

The defending champion has three top-five and four top-10 finishes this season, and with his three other teammates already visiting victory lane, there’s plenty of speed at Hendrick Motorsports. The No. 9 is next in line to grab a checkered flag and is a virtual lock to make the playoffs. So fans of Elliott shouldn’t even be breaking a sweat. He’ll be just fine.

Another head-scratching NA$CAR decision with questionable reasoning. It won’t be the last. As a great man has said more than once about their decisions “Most illogical!”

JJC should have been able to race Talledaga. I think her “payback” made NASCAR mad. She has been toiling for years with Vasserette and her other sponsors and deserved a chance. NASCAR messed up this one.

JJC is more qualified than a lot of others in all 3 series. She has sponsorship and actually led a lot of laps there in last year’s truck race. A lot of people were happy for her and would have been rooting for her. I hope she still gets a chance in a Cup race in the future.

In light of some others that have been allowed to race, this decision seems arbitrary and therefore unfair. That’s the problem with not having requirements written down in black and white.

I agree with NASCAR’s decision. I’m tired of the “underfunded team” argument. She is a wreck waiting to happen. A driver who wrecks consistently in the third-tier series has no business driving in a race like Dega where even competent drivers make mistakes that take out multiple contenders. The entire idea of using Dega as some kind testing ground for incompetent drivers is a sham and should be stopped.

Have you noticed which cars consistently bring out cautions? 15 51 52 53 77 They shouldn’t be in the event but NA$CAR needs them to do what is expected of them. Do you really think it’s better to have Derrike Cope and Norm Benning in the events? There are cars that are expected to bring out cautions in every example of Brian’s product. Jennifer deserves to be in one too since she didn’t do anything that hasn’t been done before by one of the chosen ones.

I happen to believe that all of those you mentioned should be out of the Cup Series. The top drivers that complain about the backmarkers are 100% right. “Lead, follow or get out of the way.” Most of them are incapable of doing any of those things. I’m tired of hearing about “chosen ones.” Some drivers are actually better than others!

First wendell scott now jennifer jo cobb! From racist to sexist! Danica patrick took her women audiance with her when she left. Deegan, Trotter and Decker were slowly bring them back and now this!

If we went by your reasoning, there would be only about 25 Cup cars in a race each week.

The “racing” would be a lot better and there would be a lot fewer convenient cautions. My limit would be 32 cars, especially at Bristol (non-dirt) and Martinsville and Richmond.

That would be fine with me. Elite should mean the best. The only purpose of the backmarkers seems to be to clog up track for the leaders and cause wrecks. They add nothing to the competition, except as rolling chicanes

If Natalie Wrecker can run Talladega in Xfinity. Cobb should be able to run her few laps in Cup. Neither one will finish a race.

There is a story on the home page of Micro Soft News released by the Charlotte observer 4 hours ago that says she is running. Interview – photos and all. She is as good as some of the others allowed to race. It Talladega… Let her race… Bad Call NASCAR….

She is NOT running the race. And she is NOT worthy of racing at Dega in the Cup Se