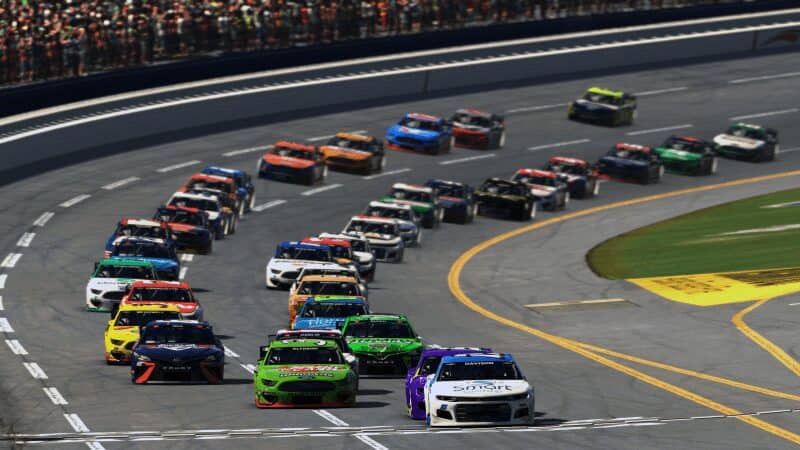 Wednesday night (April 21) paid host to the second eNASCAR iRacing Pro Invitational Series of the 2021 season. After William Byron took home the win in the first event of the season back at Bristol Dirt, he looked to make it two-for-two.

After the smoke cleared and all the strategy settled, Brad Keselowski was victorious in the GEICO 70 at the virtual Talladega Superspeedway, his first eNASCAR iRacing Pro Invitational Series event win. Keselowski made the winning move on the final restart with two laps to go to take home the win.

James Davison started from the pole in the virtual Rick Ware Racing Chevrolet Camaro and dominated the race, joined on the front row by iRacing veteran Anthony Alfredo.
Highlighting the field of 40 drivers were all chartered Cup Series drivers, plus fan favorites Dale Earnhardt Jr., Clint Bowyer, and Timmy Hill. Keelan Harvick – yes the 8-year-old son of Kevin – also was permitted to race, even with a broken wrist.
“I really like this rules package they have with the bubble push and how you can control your own destiny,” Keselowski said after his win.
The 70-lap event began calm, as the field quickly became single file with Davison and teammate Garrett Smithley pacing the field early on.
Drivers attempted to make the outside line work in the opening laps but to no avail. Once drivers like Earnhardt Jr. and William Byron jumped to the outside though, they began to make some progress. However, iRacing recently updated its physics to match the current Cup Series package, so it was a learning curve for many all night long.
Austin Dillon, Byron and Kevin Harvick were all involved in the first incident of the night on lap 8, setting up a frantic restart, but the battle was not for the lead – it was to get to the bottom lane.
With the side draft and the air bubble being the two biggest changes to iRacing’s Cup package since these drivers last raced this event in last year’s Pro Invitational event, many have not been familiar with the way these cars drive. It is much more difficult to hold a two to three-wide line of cars now. Why? Unless you have a line of seven, eight or nine cars on the top, it is easy to lose all your track position.
Bowyer had a tough night after being the cause of the second caution on lap 16. Contact with Daniel Suarez sent him around and he was forced to run the rest of the race with only one of his two “fast repairs.”
A quiet start to the night led to green-flag pit stops a little after halfway. A variety of strategies played out over the course of the last 30 laps of the race. A caution flew with 24 to go, again involving Bowyer, handing the lead back to Davison, who led the majority of the race before pit stops.
The dreaded Big One happened with 22 to go with Denny Hamlin, Kyle Larson, Matt DiBenedetto, Corey LaJoie and several others involved. This set up a caution-fest for the rest of the race. The second Big One took place with six to go and set up a two-lap shootout for the win.
The race for the win was between Davison, Keselowski, and Bell with Keselowski prevailing.
Bell, Kyle Busch, Hill, and Richmond winner Alex Bowman rounded out the top-five finishers.

The next eNASCAR iRacing Pro Invitational Series event will be on Wednesday, May 5 at the virtual Darlington Raceway with coverage beginning at 8 p.m. ET on Fox Sports 1.