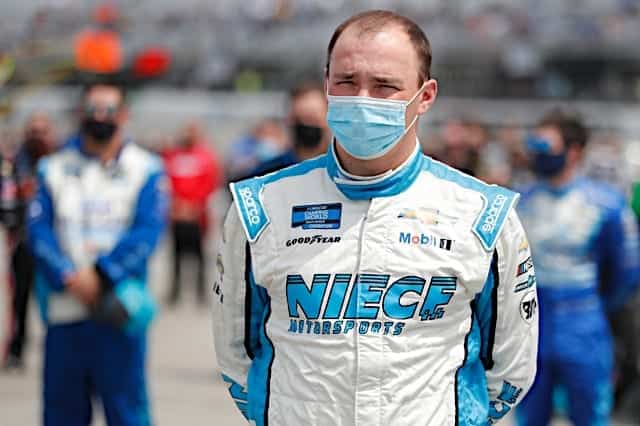 On Thursday (April 22), Brett Moffitt announced he changed his series declaration for points, shifting focus from his NASCAR Camping World Truck Series ride at Niece Motorsports to his No. 02 Chevrolet at Our Motorsports in the NASCAR Xfinity Series.

The news comes ahead of the Xfinity Series race at Talladega Superspeedway on Saturday (April 24), only the series’ second race since March 20.

Moffitt, the 2018 Truck champion, sits just 15th in truck points with a lone top 10 — ninth at Atlanta Motor Speedway  — after competing in each of the first six races of the campaign behind the wheel of the No. 45 Chevrolet for Niece, with four finishes of 24th or worse.

Meanwhile, in the Xfinity Series, where Moffitt has also raced each week, the numbers skew far better: three top 10s, including a best finish of second in the season-opening race at Daytona International Speedway, and only two finishes outside the top 12 after seven races.

“It was, for me, a really tough decision,” Moffitt told Frontstretch in a phone interview Thursday. “I just feel like with Our Motorsports and where they’re at right now, we have a shot to go win races. And we’ve proven to be really competitive this far into the year. I’ve made mistakes as a driver that have cost us a couple really good finishes between Homestead[-Miami Speedway] and Atlanta.

“If I can clean that up, I feel like we have shot at winning races and progressing throughout the playoffs, if we can get there.”

Heading into the season, Moffitt knew the plan was to compete full time in both series. Why choose to run for points in Trucks instead of Xfinity to start the year?

It stems from what Moffitt referred to as “the Kyle Busch rule of NASCAR,” forcing drivers to select which of the three national series in which they’ll obtain points while also limiting the premier Cup drivers in their trips to the Xfinity and Truck series.

“I get the rule and I understand it,” Moffitt, the 2015 NASCAR Cup Series Rookie of the Year, said. “It’s just frustrating as a young driver in the developmental series. It’s frustrating to be put in this situation, but it is what it is. The rule is there and we tried to navigate our way around it the best we could. But at this point in the season, it was was something that we felt like we had to do.”

How does a frustrated driver who feels burnt by that rule change it? That’s something Moffitt is still trying to figure out.

“You’re never going to have a perfect rule. Obviously it always affects someone and benefits someone,” he said. “I don’t really have an answer for that. I don’t know. But in this particular situation, it’s frustrating, and ultimately I had to make a tough decision. And I’m gonna live with that hopefully it’s for the better.”

The bright sides illuminate an intriguing opportunity for Moffitt, who is confident in his equipment at Our to qualify for the Xfinity playoffs despite allowing the field a seven-race head start.

But Moffitt said his commitment to truck owner Al Niece and his program left Moffitt with plenty to consider before officially making his decision.

“That’s why it was tough, because I really like working with [crew chief] Phil Gould and Cody [Efaw, general manager] and Al Niece and everyone over there,” Moffitt said. “It’s been a great experience. Obviously, we’ve struggled. But the hardest part about it is I just don’t want it to come across as leaving them high and dry.

“I felt like I felt like I was abandoning them, and that’s what made it really tough on myself. But hopefully we can continue to work together when I’m available or when I’m allowed to, I guess with the NASCAR rules.”

By opting out of collecting Truck points, Moffitt forfeits the opportunity to run in any of the three Triple Truck Challenge events in May, as well as the season finale at Phoenix Raceway in November.

Still, Moffitt wants to help the team grow into a competitive outlet once again, even if not on a full-time basis.

“I would still love to keep working with them,” he said. “I believe in them. And I know they have what it takes to get where they need to be. It’s we’re just not there yet.”

As Moffitt sets sights on the Xfinity Series, he knows the challenge of making the playoffs is steep but believes he has the equipment to get the job done at Our, where he made 29 starts in 2020.

“It’s gonna take a win,” Moffitt said. “We’re pushing all our chips in here and going after it, but I really feel like we can win. And I feel like we can progress through the playoffs if we win in time. Obviously, points-wise, you’re probably not going to get there this late in the season.

See also
The Underdog House: Michael McDowell Proves Every Dog Has His Day

“But I think this weekend’s as good a week to win as ever. And I feel like some of the tracks coming up really soon on the schedule, we ran really competitively at last year, and we’ve gotten quite a bit better since then. So I have all the faith in the world that we can win and make it happen.”

The team has also brought a second car to the track for the first time this season, getting three starts from Blaine Perkins and two from two-time Xfinity champion Tyler Reddick, who finished second at Homestead before a disqualification negated his strong finish.

Overall, the team has shown signs of improvement across the board, something that aided in Moffitt’s decision to chase a championship with them now rather than later.

“I can’t say enough about how well they’ve done in such a short time,” Moffitt said. “Last year, we had our struggles as a new team, definitely growing pains. But this offseason, they really regrouped and got it together. And [crew chief] Joe Williams and [car owner] Chris Our have put amazing people in place that we’re still a really small team and on a small budget, relative to the bigger Cup-affiliate teams, but we’re really doing a lot with it. And that makes it a lot of fun.

Moffitt said there isn’t a set number of races he intends to run for Niece as the truck season continues but “would like to run and work with them as much as possible.”

“That’s still to be determined here, but we should know more in the next few weeks,” Moffitt said.

The Xfinity Series hits the track at Talladega Superspeedway on Saturday, April 24, for the Ag-Pro 300, with TV coverage scheduled to start at 4 p.m. ET on FOX.