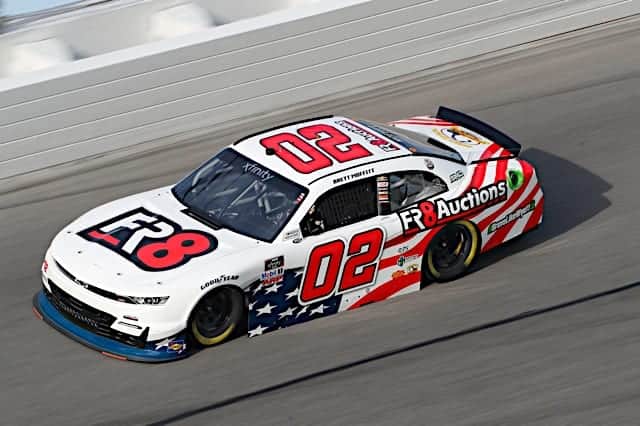 On Thursday (April 22), Brett Moffitt became the second major driver to switch his points eligibility in the season. Moffitt switched his points eligibility from the NASCAR Camping World Truck Series to the Xfinity Series. Because he has competed in all the Xfinity races thus far, he is playoff eligible. However, he starts with zero points, and he must finish inside the top 25 in the point standings at the end of the regular season as well as likely win a race.

Moffitt is confident in his decision as well as his ability to make the Xfinity Series playoffs. But he was nonetheless frustrated about NASCAR’s rule that drivers can only accrue points in one series and are limited to the number of respective starts per series based on their points eligibility.

“It’s just frustrating as a young driver in the developmental series,” he told Frontstretch. “It’s frustrating to be put in this situation, but it is what it is. The rule is there and we tried to navigate our way around it the best we could. But at this point in the season, it was something that we felt like we had to do.”

The rule by NASCAR was prompted due to chiefly Kyle Busch winning so many Xfinity and Truck races – he is the winningest driver in both series – and winning the 2009 Xfinity championship while competing full time in the NASCAR Cup Series. Remind me, then, why this rule needed to be changed.

NASCAR's 'pick a series' rule is archaic now that there are other regulations to prevent Cup drivers from making 30 Xfinity starts.

A rule is a rule, but I hope its amended to allow Xfinity and Truck drivers the chance to double up.

It's beneficial to championship depth.

I disagree. Only twice since the establishment of the rule has there been a change in points eligibility that affects the series’ season outcomes.

Twice? Remind me again why this rule needs to be changed.

When Ross Chastain switched points to the Truck Series in 2019, he became the talk of NASCAR. After winning at Kansas Speedway while having not yet declared for Truck points and then winning at Iowa Speedway after moving his points allegiance but having his truck fail post-race inspection, Chastain wheeled his Chevrolet to a win in the next race at World Wide Technology at Gateway and then again at Pocono Raceway, ultimately finishing second in the championship standings despite not earning points in the first few races.

Chastain provided a memorable storyline and an unforgettable year. His success arguably overshadowed winless wonder Matt Crafton’s title. For the third time, please remind me why this rule needs to be changed.

Sure, Moffitt now has the opportunity to go win races — shining the spotlight onto second-year Xfinity team Our Motorsports — and compete for the Xfinity championship. It will be a challenge, but Moffitt is the 2018 Truck champion. That pressure will not faze him. He has a clear mindset on his goals: win.

“It’s gonna take a win,” Moffitt told Frontstretch. “We’re pushing all our chips in here and going after it, but I really feel like we can win. And I feel like we can progress through the playoffs if we win in time. Obviously, points-wise, you’re probably not going to get there this late in the season.”

Will Moffitt’s clear determination net him a win? He lacks one in the Xfinity Series, but he has competed in all three main NASCAR series and he has 12 Truck victories. I would not bet against him; his realism might allow his team to gamble to snatch a win.

Yes, there would be storylines if drivers were able to compete for more than one series championship. However, as Kyle Busch and Cup stars proved, it ultimately would face criticism.

Instead, with the current rule, there are two separate Championship 4s. That is eight stories to follow on the final race weekend.

For the final time, remind me why this rule needs to be changed.

A racer should be able to race whenever they want to race be it all three series. Many drivers have said from the Xfinity series that racing against Cup guys teaches them. Open it up, Harvick won two championships competing full-time in both series.

“Many drivers have said from the Xfinity series that racing against Cup guys teaches them.”
…. and you believe them? You interested in buying the Brooklyn Bridge?
They used to say that because it’s the PC thing to say. NASCAR doesn’t like a driver bad mouthing any aspect of the sport.
Put yourself in their position. You can barely make ends meet and are operating on a shoe-string budget from week to week. Now a Cup guy shows up and wins taking the money, prestige and publicity away from you. You get 2nd place and would have won without the Cup carpetbagger. Next race 5 cup guys show up taking the top 5 positions, you finish 6th. Still happy those Cup guys are teaching you? If you say “yes” you aren’t really putting yourself in their position and, IMO, are full of crap.

The rules are fine the way they are. They reward the series regulars they way they should be rewarded.

Beat me to it Bill! Yes, they are lying.

“Many drivers have said from the Xfinity series that racing against Cup guys teaches them.”
What a load of crap.
Do you REALLY believe that for a minute.
They say that because that is the PC thing to say. Do you think NASCAR wouldn’t have a problem with them saying “what a ripoff it is to have someone from the higher series come down to a lower level, take the top money, publicity and prestige away from a regular”?
Put yourself in their position. Would you like it? If you say anything but “no” you are lying. Any sane person would want to win.

Sorry for the double post. The first one didn’t show up after I posted it so I thought I did something wrong. Perhaps it had to be approved because of the “load of crap” wording/

There is a big difference between a driver racing for smaller teams in both the Truck Series and the Xfinity Series and a Cup driver driving for a Cup team racing in the Trucks or the Xfinity Series. When Kyle Busch races in the Xfinity Series or the Truck Series, does he drive for JD Motorsports or RSS Racing or JJC Racing, no, he drives for JGR. Yes, I know he drives trucks for his own team. When Kyle started his own Xfinity team, how long did that last? Did he shut it down because of funding or did he shut it down because he was not winning races in it and therfore his ego wasn’t being stroked.?

No doubt the latter – he couldn’t win in the B-League with his own car.

And he didn’t like losing money with the trucks. So he got Reverend Joe to bail him out.