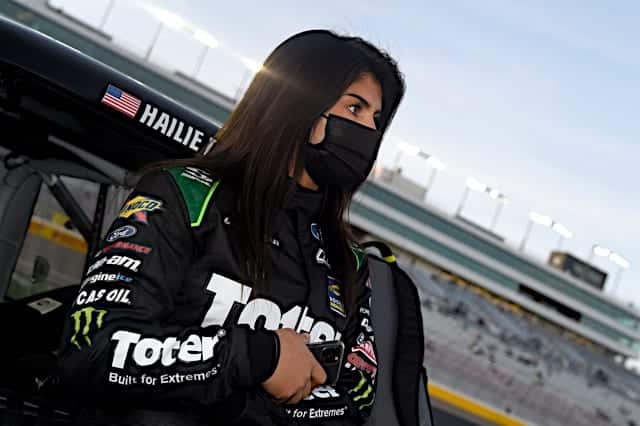 Deegan will compete in the new series, she announced on Instagram April 22.

Ray Evernham, co-owner of the series, confirmed Deegan will indeed compete in the series, though it is unknown which event she will compete. It’s expected she will be one of the part-time ringer drivers the series plans to field once a race alongside the 10-driver main field.

UPDATE: Knoxville Raceway shared to its Instagram story that she would race there on June 19.

Yes sir , this is happening! Really excited to watch @HailieDeegan race with us! This girl can gas it up ! Dirt or pavement ! https://t.co/lQDyvzYx9O

SRX will kick off its inaugural season on June 12 at Stafford Motor Speedway. The series, co-owned by NASCAR Hall of Famer Tony Stewart, will feature six races this year; Deegan has experience at Lucas Oil Raceway, one of the schedule’s tracks.

Driving the No. 1 David Gilliland Racing Ford, Deegan is currently in 18th place in Truck point standings. She also has competed in all three ARCA divisions with three ARCA Menards Series West victories.

Uh oh…. Ray is working with another young female racer.

Hope her dad will keep things in check lol

Matthew
Reply to  Bill B

They’ve managed to shoot this series to hell in a hand basket. I have nothing against this gal but is she a true superstar? Ribs, Waltrio and Andretti don’t belong either. Why not add Bozo and Ronald McDonald.Al Torney

if she needs a ‘tool’ she aint taken you.

I think it’s really cool that he’s helping her out and getting her ready for the road ahead!!!! GOOD LUCK HAILIE

She’ll be great for the series, that girl can drive the wheels off anything

Love it for her more time driving the better