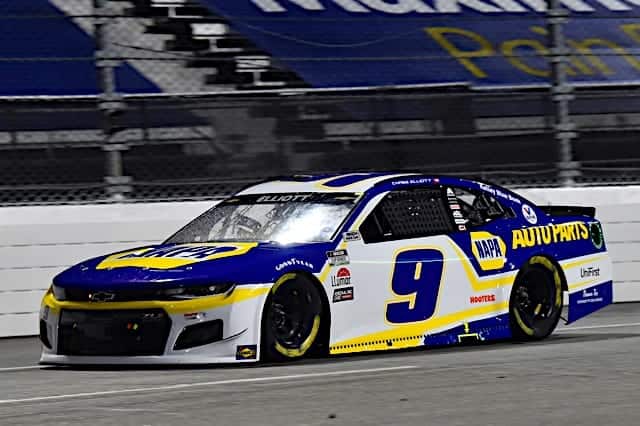 What is a Pearson Grade?

A couple of years ago, I created a metric using loop data called a Pearson Grade.

Pearson Grade is not a perfect statistic. It awards drivers near the back who can finish races, as drivers drop out due to attrition all of the time. At the same time, however, the Pearson Grade is an excellent indicator as to what drivers are under-finishing from where they are running every week. The top of the chart really isn’t that interesting — it’s the bottom of the chart that will tell some things about this first quarter of the season.

The following chart features the 32 Cup drivers who have started all nine events this season and are entered to receive Cup points, with any ties broken by points:

It really is incredible how low LaJoie is, considering this is a driver 29th in standings and driving for lowly Spire Motorsports, which should give him an advantage in this metric. It really goes to show how much bad luck that No. 7 team has had this season.

Wallace has also had bad luck this season, having to take unscheduled green flag pit stops near the end of races at Daytona International Speedway and Bristol Motor Speedway in particular.

It seems like Keselowski has had a bit of a slow start to the season, lagging behind his teammates and unable to win yet unlike the two of them.

But the driver that really sticks out on this chart is Elliott.

Is Chase Elliott underperforming as champion?

There has been a lot of talk about Harvick having a down year compared to his 2020 season. While that is a case from a statistical viewpoint, what does that say about the defending series champion, who has almost the same ARP as Harvick (10.9 versus 11.6) and is a full three spots back on average finish (14th vs. 11th)?

Now, granted, Elliott is ahead of Harvick on points due to Harvick’s struggles to get stage points this season. But Elliott has seemed unable to diversify his portfolio of great racetracks outside of road courses, superspeedways, Dover International Speedway, Martinsville Speedway and Phoenix Raceway. That doesn’t account for 19 races on the schedule, or just over half of the regular season.

Under this points system, the most important thing to do is to win in the playoffs. Elliott was not as good as Harvick was last year overall, but it didn’t matter because Elliott was able to win the right races in the playoffs and Harvick just couldn’t. It’s not wise though, however, to just rely on winning those right races.

It’s hard to win NASCAR races. Yes, I know that’s an obvious statement. But sometimes it’s easy to forget about that after a 10-year period in which Harvick won 574,623 straight races at Phoenix and Kyle Busch won over 100 sanctioned NASCAR national touring series races.

Take the Daytona road course in February, when Elliott came in as the obvious favorite and led over half of the race. What happened?

This is getting nuts at the @DAYTONA road course. #NASCAR pic.twitter.com/nXByQw1WDb

Heck, just look back at last year’s playoff run. Elliott was one pit crew member being stupid away from not winning Martinsville or the championship. Throwing away playoff points by not finishing nearly as well as the day indicates could very well come back in October.

If Elliott wants to repeat, he’s going to have to start getting more diverse at what tracks he does well at.

Will Deegan perform at SRX?

This is a good move for everybody involved, even if it’s just for a race or two. For SRX, Hailie Deegan is the biggest star on their roster besides Tony Stewart, and she brings a much different and more younger potential fan base to the series.

SRX has had a problem when it comes to actual star power. Stewart is a big name mainstream, Bill Elliott still has a core fanbase. But a lot of other names on the driver roster have almost no name value (Ernie Francis Jr.), really aren’t superstars (Marco Andretti, Michael Waltrip), fringe NTT IndyCar Series/TransAm drivers or are former NASCAR guys who would bring largely the same fans that Stewart brings to the table (Bobby Labonte, Greg Biffle). Deegan is a good addition in that sense, even if she doesn’t have the resume that stacks up with the rest of the field.

For Deegan, this is good exposure and should be a fairly non-competitive field for her. Most of the regulars have minimal, if any, stock car experience, and the only driver regularly competing in those style of cars is Labonte with his modified program. Even though Deegan has been very mediocre in her Truck rookie season so far, she’s got way more recent big league experience than anybody else in this field.

Who will win at Talladega Superspeedway?

Talladega is the biggest oval on the NASCAR schedule, and it’s also the wildest party on the circuit. While the legendary infield parties have been muted in COVID-19 times, the racing on the track itself probably won’t be.

Making his Cup debut this weekend is Harrison Burton, who is the first Cup driver born in the 21st century. This kid could legitimately walk up to Joey Logano this weekend and go, “Nice glasses, boomer.” That frightens me. Time needs to stop moving so quickly. Keelan Harvick will be able to enter ARCA Menards Series races in seven years, and that’s a scary concept.

Brad Keselowski is good at superspeedway racing, even though he’s taken a bit of a backseat recently to Denny Hamlin in that department. Although neither would be a bad choice, Keselowski has a lot to prove after those first nine races, and he could come out of the gate pretty hot.