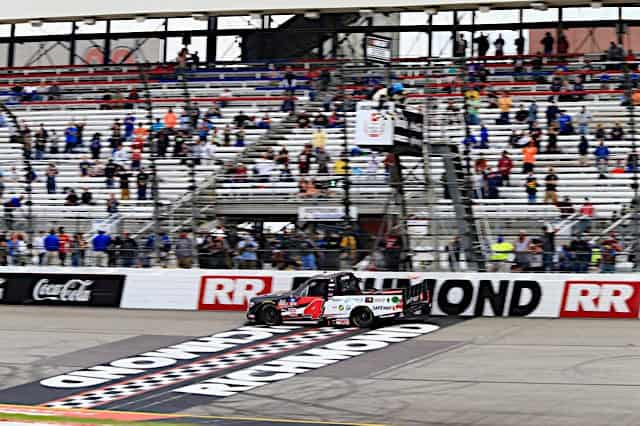 This weekend, the Camping World Truck Series sits quietly while the NASCAR Cup and Xfinity series head to Talladega Superspeedway. With just six races under its belt, it’s a disappointing break in the momentum, though the series will be right back on track the following weekend at Kansas Speedway on May 1.

It’s a stark difference from 2020 where Toyota won just seven times throughout the entire 23-race schedule, and its sixth win didn’t even come until Austin Hill won at Las Vegas last September.

“It’s a good problem to have. I mean, fortunately, we have been successful,” KBM owner Kyle Busch told media Monday when asked about Toyota’s and KBM’s dominance this season. “You know, ThorSport (Racing), I think won the first few races of the year, so that wasn’t good for us, but it was good for Toyota. But obviously, they have invested a lot in the Truck Series, and they have since they came in the Truck Series back in the early 2000s.

“But all in all, it’s a good problem to have, you know, being as successful as we are. And keeping Toyota around is the name of the game.”

I know what you’re thinking. Has Toyota actually been that dominant or has it been more of an ability to capitalize on the lead at the right time? Would you believe that Toyota drivers have actually led 698 of 816 total laps run in the Truck Series this season? That’s right, the manufacturer has been out in front of the field for a whopping 85.5% of the races this year.

Let that sink in for just a moment.

Would you believe that Chevrolet and Ford actually failed to lead a single lap last weekend at Richmond? Toyota had just 13 trucks in that field compared to 27 for the other two manufacturers, and just five of those 13 Toyotas combined to lead every lap.

At what point do the other two manufacturers become concerned about this situation, especially given GMS Racing’s success last season?

“We’ve had some discussions on that today and trying to understand that a little bit and figure out how we can claw some of that back,” Warren told Frontstretch’s Daniel McFadin Monday. “I think the first part of the season that tracks are a little different, then as you’re getting into the meat of the intermediate races and some of the other races as you go into year, so I wouldn’t call it a panic, but definitely something where it’s clear that we need to improve and meet it from our perspective.

“It’s trying to understand, really, what is different. Sheldon Creed and the other guys at GMS (Racing) and Niece (Motorsports) last year were really competitive. So really trying to say, ‘OK, what is there different that needs to be reacted from?’ Or is it just a matter of trying to add some resources to help analyze where the performance is at and help the guys a little bit? It’s a little bit from our perspective trying to find out where their needs are.”

Warren went on to explain that GM is on a “fact-finding” mission to see what can be done to “learn some of the execution side.”

That’s not to spell all doom and gloom for anyone other than Toyota this season. In fact, it’s the opposite. Like Warren mentioned, you do have to look at essentially half of the six races run this season as wild cards.

The Truck Series started off the year with a superspeedway that could truly be won by just about anyone in the field if they’re in the right place at the right time. That was followed by a race on the Daytona road course that was just added to the schedule last season due to the COVID-19 pandemic.

Two visits to the track with zero practice or qualifying leaves little margin for error when it comes to setups and navigating the track the best.

And that doesn’t even include Bristol dirt, which thankfully allowed practice. There should have been qualifying races, which would have translated into more track time, but Mother Nature had different plans.

With all of that said, anyone associated with the Ford and Chevrolet teams this season should absolutely take notice of Toyota’s dominance. After all, there are only nine more races to set the playoff field, and if the Chevrolet and Ford drivers don’t start winning stages and races, they’re going to find themselves digging out of a deep hole before the playoffs even begin.

The pendulum will always swings back the other way.

“How much will it cost?”

The only problem I see with Toyota dominance in Trucks is that they have no place for the drivers to go beyond the Truck Series. KBM has been so successful at developing young drivers that they end up losing them to teams like HMS, as in the case of William Byron.

As anyone in the know knows, ALL trucks use the Chevy Illmor 396 Engines , so they are really Chevies save for the tin . Big Joke !