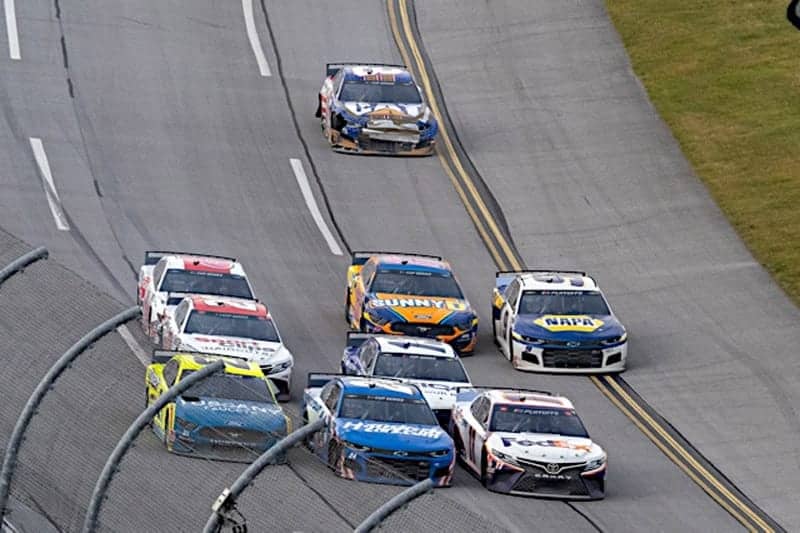 After three weeks of short track racing, NASCAR Cup Series drivers travel to Alabama this weekend to take on the largest track on the circuit: Talladega Superspeedway. Let’s get your daily fantasy NASCAR DraftKings lineups set for the GEICO 500, airing on Sunday, April 25 at 2 p.m. ET.

The 2.66-mile course is wider than its superspeedway counterpart, Daytona International Speedway, allowing cars to race three- and four-wide to the finish line. The action can vary in the middle of the race, though; on restarts drivers can vary from being ultra aggressive to spreading out in a single-file train on a long green-flag run. Pit strategies may also come into play if racing stays calm.

However, one wrong move can set the Big One in motion, wiping out several cars and bunching up the field for a restart. And, as is often the case on these track types, cautions can breed cautions. So if you want to win your DraftKings contests, you’ll need drivers who generally avoid the mayhem. Keep their track record of keeping it clean in mind when setting your daily fantasy lineups.

Before I move onto my picks, let’s see the results from Richmond Raceway last weekend.

Denny Hamlin was the right play last week, as he led 207 laps before ultimately coming home a bridesmaid once again. Christopher Bell finished fourth and Kyle Busch overcame a pit road penalty to end up eighth.

Due to these higher scores (especially Hamlin’s) this lineup was able to win, both in cash and tournament contests. It earned $1.50 in the $1 Happy Hour tournament and cashed the big $1 single entry double up.

Remember that the majority of points you score this week will probably come from value plays who gain positions on the track. Dominators could also help your lineup if the driver wins or gets a top 10.

Besides being the most recent eNASCAR iRacing Pro Invitational Series winner at virtual Talladega, Keselowski has the most wins of current Cup drivers on the real track. Unfortunately, his last victory (and top 10) came in 2017; the highest finish at ‘Dega since then was 13th in spring 2019. Still, he does have experience in pack racing.

The No. 2 Team Penske pilot looked to be close to a Daytona 500 runner-up finish when he and teammate Joey Logano wrecked on the final lap. Instead of celebrating, the pair ended up in a fireball and finished 13th and 12th, respectively. Keselowski did finish 10th at Daytona last August, though.

Unlike his colleagues, Keselowski has yet to win this year so he’ll try to work with his fellow Fords to survive until the end. If he does, don’t count him out of the running.

Blaney already has a victory at Atlanta Motor Speedway but would love nothing better than to redeem himself on a superspeedway. The past two events on this track type resulted in a 25th at Talladega last year and 30th in the 2021 Daytona 500. Wrecking out on lap 14 in the season opener was not the game plan, as I’m sure he wanted to be there at the end with his fellow cohorts.

See also
Ryan Blaney and the Keys to Success at Talladega

But this week is a new pack race, and the No. 12 wheelman has proven he’s more than capable of holding the lead at the front of the pack. He won back-to-back events at Talladega in fall 2019 and June 2020, leading 35 and 63 laps, respectively, in the process. Although anything can happen at this venue, Blaney should be around at the end and earn some dominator points on DraftKings.

Honestly, I’m surprised Hamlin isn’t the highest-priced driver on the slate. Hamlin won the most recent event at the Alabama racetrack after leading 26 circuits in fall 2020. He’s on a six-race top-five streak on superspeedways, which is simply incredible. While he generally likes to hang back until the final stage, the 40-year-old veteran still makes his way to the front of the pack and lead laps.

However, the No. 11 Joe Gibbs Racing Toyota is starting in front this time, if it doesn’t fail inspection too many times. It will be interesting to see Hamlin’s strategy here; will he stay in front to lead stages or drop out of the pack and linger back? Either way, as long as Hamlin continues that top-five consistency, he should meet his value on DraftKings.

Very rarely do we have a driver at this salary among my top picks, but I couldn’t ignore Preece’s potential at Talladega. Last fall, he ended 10th after starting 25th and in spring 2019, he was on the podium. Preece has shown an important ability on superspeedways thus far in his career to avoid the carnage and finish much higher than where he starts. That’s just what you need for your DraftKings roster. Preece will have a good chance to keep up the strong finishes Sunday as he’ll begin 29th.

Don’t let his average finish fool you; Haley is actually very skilled at Talladega. Last season in the NASCAR Xfinity Series, he swept both events there, leading 16 laps in June but just two in October. All he needed to lead was two, as his Kaulig Racing teammates crashed out in front of him as they approached the white flag.

Haley also has a Cup win at Daytona in summer 2019, though that was a bit more luck than anything. Rain and lightning halted the race after much of the field was taken out. As cars drove under yellow flag conditions, some in front of Haley pitted, thinking the race would be restarted soon. The opposite occurred, and Haley took home Spire Motorsports’ first Cup victory.

While that’s unlikely to happen again, he should still earn a top 20 with this organization. That’s enough to make him a good benefit to your DraftKings lineup.

In his second Cup start and first on the Daytona oval, Grala ended 28th after a brake line fire took him out of the race. Still, he had a fast Kaulig car and likely would’ve had a better finish if it weren’t for that poor luck. I don’t know why Grala is priced this low; Kaulig has good equipment for superspeedways and Grala has won on this track type before. Of course, his victory came in a Camping World Truck Series race in 2017, but still.

Grala should definitely be on your DraftKings radar strictly for his potential value. He’ll start 38th, so as long as he hangs back and doesn’t do too much in the first two stages, he should be fine.