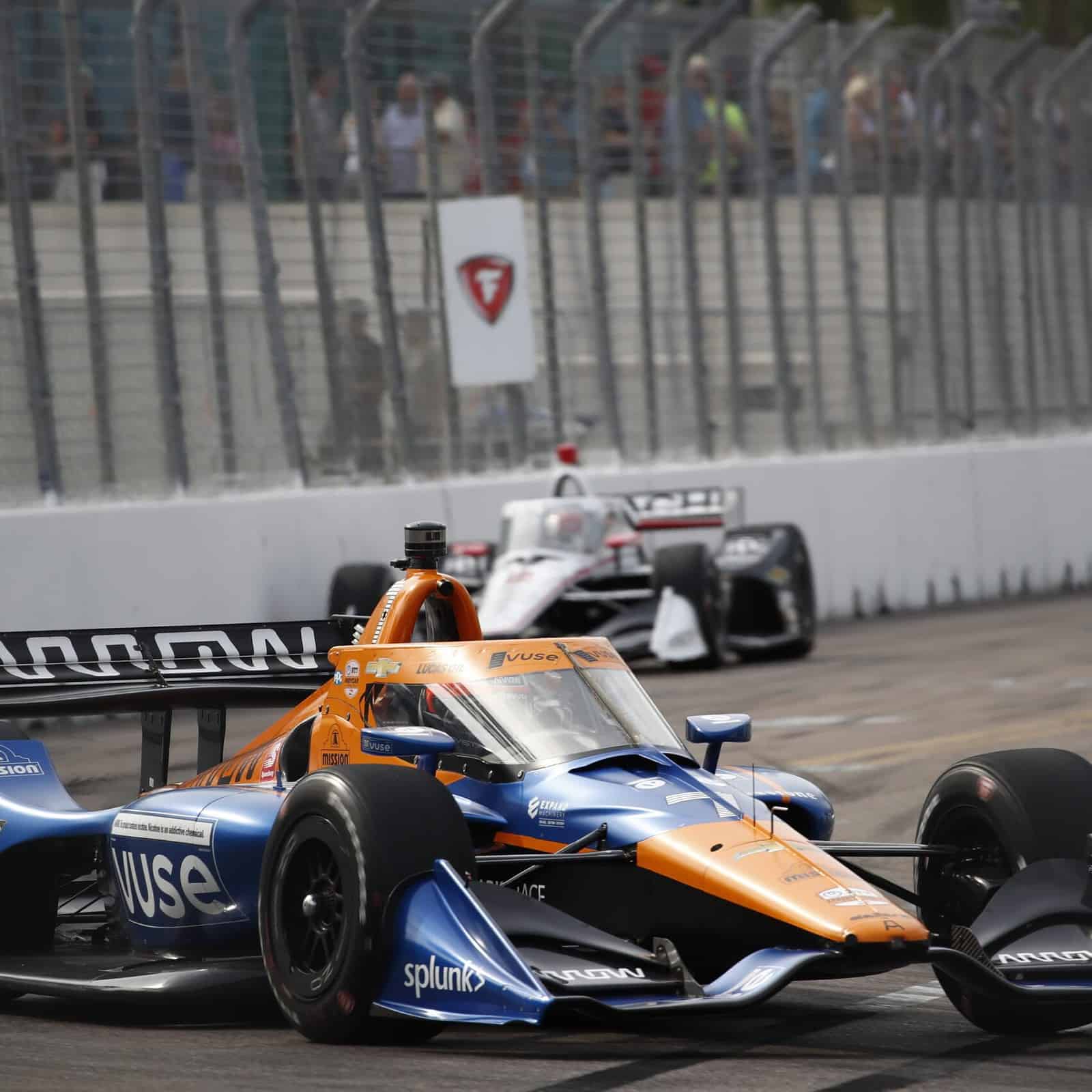 ST. PETERSBURG, Florida — Barber Motorsports Park was a tale of two races for Arrow McLaren SP, but the streets of St. Petersburg offer a chance for Felix Rosenqvist to forget last week and Pato O’Ward to figure out how to finally nail an IndyCar race win.

For Rosenqvist, his race basically ended in the melee on the first lap. Despite coming back from the paddock with a repaired car, the Swede was never going to fight all the way back to score his second IndyCar win.

Instead, the No. 7 Chevy entry will basically look at St. Petersburg as a new start to the season.

“Qualifying ran short for me and the race also ran short for me at Barber,” Rosenqvist said. “I think we learned a few things but not as much as we would have and we definitely didn’t pick up the points we wanted to but I think we kind of learned how to find something a bit better for me in terms of drivability. I think the car was a bit too on edge in Barber, especially on the limit and then you start doing mistakes and when you make mistakes, you don’t have the room for it in IndyCar.

“I think here you just want to kind of restart that a little bit, maybe go our own path a little bit on setup and make sure we have a nice clean weekend and pick up some good points.”

St. Petersburg was Rosenqvist’s first time racing in the U.S. in Indy Lights back in 2016, managing to win the second race that weekend. In 2019, Rosenqvist made his IndyCar debut driving for Chip Ganassi Racing, finishing fourth.

On the other side of the garage, O’Ward won pole position at Barber, had the fastest race lap, but could only manage a fourth place finish. A three-stop strategy meant that O’Ward had to run laps quite a bit faster than race winner Alex Palou, but O’Ward wasn’t able to get his black sidewall primary tires up to temperature fast enough to make that happen.

“It hasn’t been the first frustrating weekend in the past year,” O’Ward said. “It’s just something that we have to flip the page and focus on this weekend and make sure it doesn’t happen to us again. I like this place, I like this track, we had a quick car when we came here last year, but we need to get better, we need to qualify a bit better than what we did last time and hopefully we’re one step better at the end of the race.”

O’Ward finished second last year in the season-ending race in St. Petersburg that was postponed from March to October due to the pandemic. With wins at the 1.8 mile street circuit in Indy Pro 2000 and Indy Lights, the Mexican racer is looking forward to building on his second place finish last fall at St. Petersburg with another top-tier result to keep momentum going.

“[The momentum] obviously helps and it keeps everybody in the team very motivated,” O’Ward said. “What’s nice about it is that it’s not lucky momentum, it’s earned, and we have shown pace everywhere that we’ve gone and that’s really cool to do in such a competitive series like this.”

Scott Dixon has never managed to defend a championship in IndyCar competition. With six titles, the best the 2008 Indianapolis 500 champion has been able to do was second place in the 2009 standings, losing the title to teammate Dario Franchitti by 11 points.

Dixon had about as good of a result he could have last week at Barber. Finishing third, the New Zealander finished 20 positions higher than 2017 and 2019 series champion Josef Newgarden.

Newgarden was involved in the first lap melee and did not complete a lap at the track the Tennessee native has made into his own with three victories. But Dixon knows that having bad weekends can’t really be done that much any more.

“It’s important for anybody that wants to try and chase the title,” Dixon said of banking championship points. “I think the first championship I won in 2003, I had six DNFs, you just can’t do that any more. It’s not going to happen, so consistency is key.

“I feel like you get maybe one, two or three races that you can kind of scoot off to the side and hopefully  somebody else has some bad luck. It’s much nicer as I learned last year to have a strong start to a championship compared to a lot of the other ways that we’ve won championships coming from a lot of points behind.”

Two places ahead of Dixon was teammate Palou, scoring a win on his Chip Ganassi Racing debut. The Spaniard raced last year for Dale Coyne Racing with Team Goh and filled in the seat vacated by Rosenqvist. With a race win on his team’s debut, Palou is no longer under the metaphorical radar.

“It feels amazing to win to win and to win the first race of the year with a new team, but I still have a lot to learn,” Palou said. “Scott (Dixon) was still doing things that I cannot really do, it worked out in Barber but we still have lots to learn but it feels amazing and I think we can only get better from here. The confidence I have now and everything is only going to help. We started from zero now, we’ve been working all week as if we finished last in Barber so we’ve been working really hard to be able to be up there this weekend.”

Sebastien Bourdais lives in St. Petersburg and has two wins at his adopted hometown race, in 2017 and 2018. Last year with A.J. Foyt Racing, the Frenchman finished fourth ahead of his full-time return to IndyCar racing after spending a year in IMSA.

Working with former Audi LMP1 engineer Justin Taylor, Bourdais is looking to earn A.J. Foyt Racing’s first win on a street circuit since Takuma Sato won for the team at Long Beach in 2013, but feels no added pressure being at his home race.

“It just makes it that much sweeter if it works out,” Bourdais said. “I mean, you can only give your very best and it just makes the weekend a little harder because obviously you have more attention, more [media] requests and things leading up to it trying to help the Grand Prix and all the promotion but I wouldn’t say it’s harder or more stressful, it’s cool if it works out because then you can share and celebrate with friends and family and there’s no better feeling than that.”

The New Zealander will be able to parlay his lessons from last year into this year and so far has been successful by setting the eighth fastest lap in the first practice session.

“[It’s about] knowing where the bumps are, knowing where the blind corners are, which corners you’ve got to get right close to the wall on the exit and entries, a lot of that stuff is going to be helpful for me moving forward,” Mclaughlin said. “It just makes me feel a lot more comfortable so I can basically get in the car, and just work on the car setup straight away, rather than learn everything. Feeling a lot more comfortable than I did say, six months ago.”

St. Petersburg last year was McLaughlin’s first open-wheel race in about a decade when he did Formula Ford back in Australia. In touring cars, the 2019 Bathurst 1000 winner was able to rub doors with his fellow competitors with no issues, but knowing how far to push things has been a challenge.

“I think Jimmie (Johnson)’s having that same issue where you don’t really know how hard you can race these people,” McLaughlin said. “I’m slowly getting used to it, getting comfortable with it, best thing about these IndyCars are they’re built like brick shithouses! They are really strong, you can bang wheels and semi get away with it, not too much, but it’s better than a lot of open wheel categories all around the world.”

Getting used to an open wheel car has meant getting used to a different driving perspective. McLaughlin has sat on the right hand side of all of the touring cars he’s raced in Australia and New Zealand, while in an open-wheel car the driver is positioned in the center of the car looking from left to right. While there is a change there, there’s an added benefit for McLaughlin.

“It’s nice being able to see my wheels to be honest,” McLaughlin said. “So I enjoy that, seeing what the tire’s doing and what the tire looks like across a run as well, it’s something I haven’t been used to in the past but it’s a cool thing.”