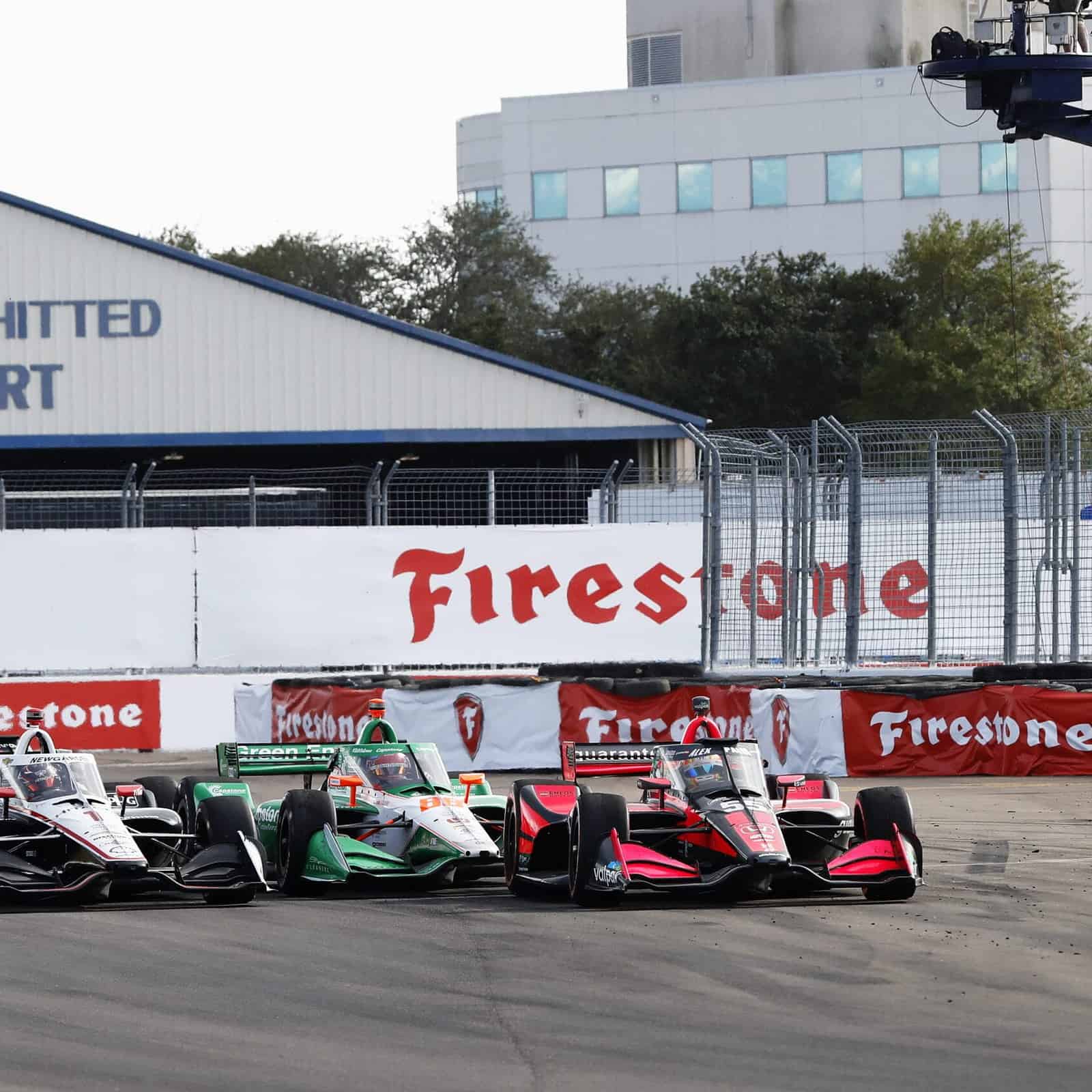 After dashing around the sweeping hills of Barber Motorsports Park last weekend, the NTT IndyCar Series travels to St. Petersburg, Florida this weekend for 110 laps on the narrow street circuit in the sweltering sun. While Barber’s blind crests and swooping off-camber turns are no walk in the park for the drivers—even catching out two-time champion Josef Newgarden this year—temporary street circuits like the one in downtown St. Petersburg present a fresh set of challenges for the IndyCar field in Sunday’s Firestone Grand Prix of St. Petersburg.

Racing on public roads means contending with obstacles that would never appear on a well-manicured private track: the streets are littered with bumps and feature a slight curvature with a crest in the middle, designed so rainwater can easily flow into gutters. Painted lines and writing on the track can become slippery when wet, which is especially relevant at St. Petersburg where the front straight is built on a heavily-marked airport runway. Lastly, street circuits mean racing full-speed and wheel-to-wheel with the walls never more than a few feet (and sometimes mere inches) away, ready to punish any mistake. Despite the inherent challenges of street courses, several drivers in this year’s IndyCar field shine when racing on makeshift street circuits like the Streets of St. Petersburg.

2014 champion Will Power is arguably the best at battling it out on city streets, with 15 out of his 39 wins in IndyCar coming at street tracks. That rate, 38 percent, is the highest among active drivers with more than seven race wins since 2008. It’s a similar story with podiums: 28 out of his 76 have been on city circuits, and that 37 percent rate leads active drivers with more than seven post-2008 wins as well. Power has taken victory twice before at St. Pete, in 2010 and 2014, and has been victorious at every street circuit on the IndyCar calendar since he joined the series. Although the Australian hasn’t won a street race since 2016 (Detroit and Toronto), he has consistently collected podiums. After a second place finish at Barber, Power will likely be in the mix for a win at St. Petersburg.

The only current driver with more wins and podiums than Power is six-time champion Scott Dixon, but just 16 percent of the New Zealander’s wins have been at street tracks, last among all active drivers with at least one street circuit win. The same holds true for Dixon’s podium results, with just 17 percent coming on street tracks, also last. While these rates are low, it’s not because Dixon struggles at street tracks. Instead, it’s because the dominant Dixon is capable of winning everywhere; having 11 more wins and 46 more podiums than Power negatively skews his rates.

The 2008 Indianapolis 500 winner has earned six podiums in St. Petersburg, including 3rd in last year’s race, although he’s never managed to win there. But he has won in Detroit, Long Beach, Toronto, and Houston, and has a podium at every street race weekend since finishing sixth at St. Pete to start the 2018 season. Dixon looked as quick as always last week, placing third, so he will likely be at the front of the pack come Sunday.

Two drivers with strong race pace at Barber were Sebastian Bourdais and Graham Rahal, who started 16th and 18th and finished fifth and seventh, respectively. Both have historically done well at street courses: 19 out Bourdais’ 37 wins (51 percent) and 28 out of his 57 podiums (49 percent) have been at street tracks, and although the majority of those results came in CART, five out of Bourdais’s six wins since returning to IndyCar in 2011 after a stint in F1 have been on city streets. Rahal, on the other hand, has seen half of his six wins come at street circuits.

Bourdais won at St. Pete in 2017 and 2018 and finished an impressive fourth in last year’s grand prix, which was only his third race in a part-time season. Rahal, meanwhile, collected his first win at St. Pete in 2008, and finished on the podium there in 2018. Although Bourdais and Rahal are both at smaller teams, their adeptness on street tracks and quality drives in Barber make them outside contenders for a St. Pete podium.

Josef Newgarden’s rate of winning at street tracks is relatively low at 26 percent, but St. Petersburg has been home to two of his five street track victories, in 2019 and 2020. Newgarden didn’t even complete one lap at Barber, so last year’s championship runner-up will be even more motivated to get himself back in the championship fight by winning in Florida for a third time in a row.

James Hinchcliffe also struggled at Barber, but three of his six wins have come on street courses, including at St. Pete back in 2013. Hinchcliffe has eight podiums at street tracks out of 17 total top three-finishes. The Canadian still needs to find his rhythm after a part-time season last year, but with 47 percent of his podiums occurring on street circuits, the 2016 Indianapolis 500 polesitter could be an outside shot at top five result if he can hook everything up.

Pato O’Ward excelled at St. Petersburg, the only street race in 2020, in his first full-season, claiming second place. He also collected four podiums across six street circuit races in Indy Lights, including a win and a third place at St. Pete. Although the sample size is small, O’Ward looked mighty quick at Barber, starting on pole and finishing fourth, and could be on for a good result this weekend.

Although Felix Rosenqvist has yet to win at a street track in IndyCar, the Swede was a street race master in his pre-IndyCar career. While racing in European feeder categories, he triumphed at the notoriously difficult Macau Grand Prix twice and finished second there twice as well. He eventually joined Formula E, which runs exclusively on city-based tracks, winning three times and collecting seven podiums over two seasons, coming third in the 2016-2017 season and sixth the following year. Rosenqvist also placed fourth on his IndyCar debut at St. Petersburg in 2019, showing his expertise for racing on tight and twisty city streets.

While these eight drivers have shown a knack for racing on street tracks, anything can happen in this weekend’s Grand Prix of St. Petersburg, especially when the walls are this close.