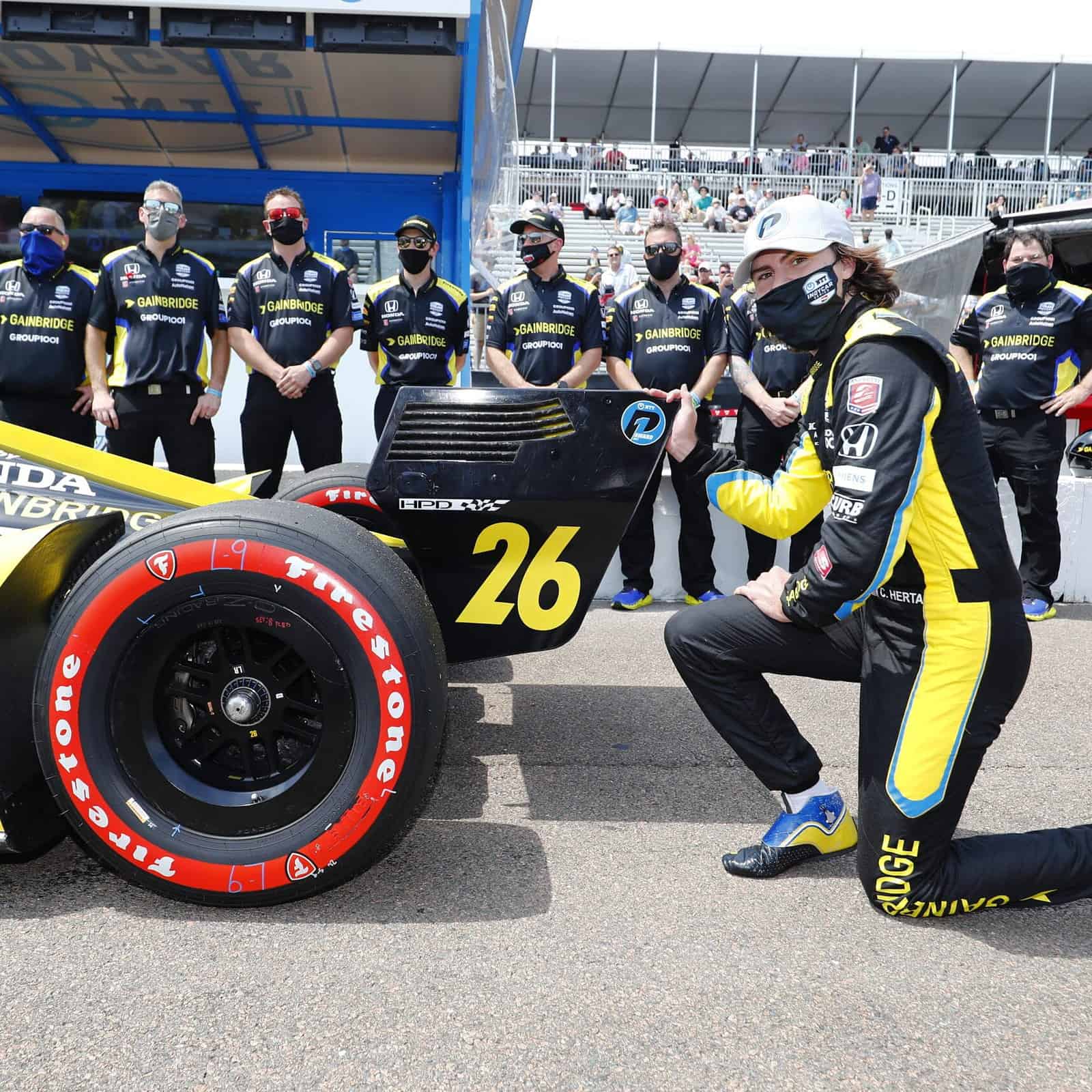 Herta’s pole-winning lap of 1 minute, 0.321 seconds averaged 107.425 mph around the 1.8 mile street circuit in St. Petersburg for the No. 26 Gainbridge Honda. The second-generation racer was almost exactly a quarter of a second faster than Jack Harvey in the No. 60 Autonation/SiriusXM Honda for Meyer Shank Racing.

Herta has one major change for his full season campaign in that his father Bryan is his race strategist. After running well at St. Petersburg during his time in the Road to Indy, the 2018 Indy Lights championship runner-up was looking for more with his father on top of the pit box.

“Obviously, that’s super special,” Colton said. “I think the most important thing for me was getting a pole here eventually. I’ve been so close every year that I’ve come here so far since my rookie season. Really had the pace to every year, but just haven’t gotten it done.

“Excited for obviously my dad to be on the car. That was the first pole he shared with me. He was super excited about it. Then obviously just carrying on with the program that we’ve had this whole two days. Really happy to kind of get the pole and get it going. Right from practice, we were really fast. To cap it off with pole and hopefully with a win tomorrow, [it] would be amazing.”

This is Harvey’s third front row start after the IndyCar Grand Prix and the first race at Road America in 2020. In Meyer Shank Racing’s second full season in IndyCar competition, Harvey has helped build that program since its inception in 2017 and has seen its progression first hand. With a technical partnership with Andretti Autosport, the team has only progressed that much faster.

“It’s not just me, it’s a team effort,” said Harvey. “With our technical partnership with Andretti Autosport, I mean, you see all their guys always being very quick no matter what.

“I think we’ve got a really good car, I think Colton mentioned earlier in Barber it was a bit more difficult than it was this weekend. But it’s extremely competitive, really tight on time.

“I think normally we hit our theoretical lap pretty well. I think that helps. After that, it’s a team effort. The car has always been very good. I trust my engineer a lot to give us a good car. Got great teammates who are going to do well. After every session, even if you’re the quickest guy, you’re the second quickest guy, there’s still a lot to look at and learn from.”

The first round of knockout qualifying started with the fastest six of the first group advancing to round two. Alexander Rossi, Herta, Pato O’Ward, Simon Pagenaud, St. Petersburg resident Sebastien Bourdais and Scott Dixon advanced to the next round, but not without drama.

Dixon had a spin early in the group and would lose his fastest lap in the session as he impeded another driver. However, Dixon was able to set a fast enough lap that would allow him to advance to the next round in qualifying.

Not advancing and filling out the odd grid positions from 13th on down to 23rd place was Ryan Hunter-Reay, Takuma Sato, Felix Rosenqvist, Conor Daly, Ed Jones and Jimmie Johnson.

This was the only session Colton Herta participated in where he wasn’t fastest overall.

In group two, Josef Newgarden advanced with Graham Rahal, Harvey, Rinus VeeKay, James Hinchcliffe and Alex Palou. VeeKay had a drama of his own being impeded by Dalton Kellett. Kellett was trying to get out of VeeKay’s way near the end of a lap but the timing wasn’t quite right. Judged to have impeded the Ed Carpenter Racing driver, Kellett was assessed a penalty of losing his two best laps, dropping him to last in the group.

Occupying the even grid positions from 14th through 24th are Scott McLaughlin, Marcus Ericsson, Romain Grosjean, Will Power, Max Chilton and Kellett.

Power’s failure to advance was a curious one. The 2010 and 2014 St. Petersburg winner failed to advance from round one of qualifying for the first time since Toronto in 2019, having just signed a new contract with Team Penske to remain in the No. 12 Chevrolet through the 2023 IndyCar season.

Another statistical anomaly occurred for round two of qualifying as both remaining Chip Ganassi Racing entries were unable to advance to the Firestone Fast Six. Six-time IndyCar champion Dixon could only manage eighth fastest while last week’s winner Palou would only be able to get 10th fastest. VeeKay led the bottom half of the round in seventh with Rahal in ninth and Rossi and Hinchcliffe filling out the rest of the top 12 grid positions.

In the final round, Herta and Harvey locked out the front row ahead of Newgarden, Pagenaud, Bourdais and O’Ward rounding out the top six.