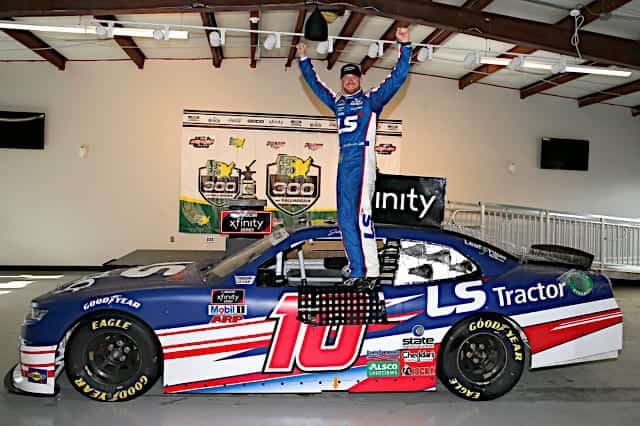 “Rain, rain, rain, rain,” were the words of Chris Rice over the radio of Jeb Burton‘s No. 10 Chevrolet just as officials brought the field to the pit road with less than 25 laps to go.

Shortly after, Burton was declared the winner of the Ag-Pro 300 at Talladega Superspeedway; his first career Xfinity Series win credited to a lone cell of rain, which brought more than a small sprinkle and an emotional win at that.

“I’m trying not to cry,” Burton, 28, said in an emotional post-race interview, sheltered from the rain. “These guys, they deserve the one. It’s just unbelievable.”

Burton has been in the hunt for the checkered flag for seven years, running 51 races overall. This season is his first full-time season in the series.

Sixth-place winner Noah Gragson received a nice $100,000 paycheck after being declared the winner of the Dash 4 Cash contest for the second weekend in a row, being the highest finisher of the four contenders. However, he said he races for wins, though the payday is nice. When asked if he had a car capable of winning, the winner of stage two simply responded, “Absolutely.”

“I could really go anywhere I wanted to. Pit crew did an awesome job all day,” Gragson added, as he continues to look for his first win of the season. “$100,000 is a big one for us, this is two weekends in a row. … but man, I wanted to race for the win really bad.”

The second on-track caution for cause was the end of green-flag racing. At the exit of turn two, Michael Annett, Ty Dillon, Brandon Jones and others were involved in an accident due to Joe Graf Jr. running up the track into Annett, sparking the only “Big One” of the day. This accident happened just before the rain began moving in.

The first on-track caution was minor, with Martinsville-winner Josh Berry spinning on his own in turn three, laps prior to the big one.

The NASCAR Xfinity Series continues on to Darlington Raceway in South Carolina, where they will celebrate the story and legacy of the racers who built the sport with NASCAR’s Throwback Weekend. Catch the action on FS1 on Saturday, May 8, at 1 p.m. ET.

Why has Monster Energy taken there name off winner Ty Gibbs #18 the past two races? This is just as important question as getting a new sponsor.