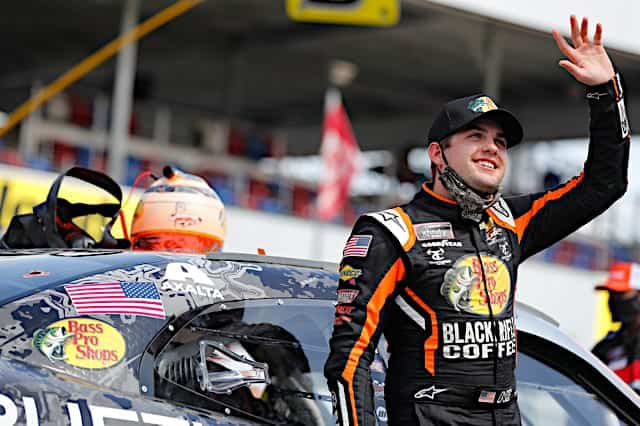 Two straight $100,000 bonuses would make most people extraordinarily happy. However, Noah Gragson is not one of those people.

When Saturday’s NASCAR Xfinity Series Ag-Pro 300 at Talladega Superspeedway was shortened as a result of weather, it left Gragson, who led four times for eight laps, deprived of the chance to race for the win. He also won the race’s second stage.

STAGE WINNER: @NoahGragson takes the fight to @AustinCindric and wins Stage 2 at @TALLADEGA!

"I could go anywhere I wanted to, the pit crew did an awesome job all day, I was really just trying to do big highlight moves…$100,000 is a big one for us. It's pretty cool to be able to do that."

But Gragson was chasing something cooler, something that he has not achieved since last June at Bristol – a race victory.

The Las Vegas native didn’t mince his words about that on Saturday afternoon following the race.

Well, @NoahGragson was just handed a styrofoam plate with "Dash for Cash winner" written in Sharpie on the plate because … well, they can't find the big check.

“$100,000 is nice, but I race for wins,” said Gragson in his post-race interview during FOX NASCAR’s telecast.

Recent trends show he is closing in on that. In the past five races, Gragson has finishes of sixth or better all but once, including a second-place finish at Martinsville to teammate Josh Berry.

He’ll continue that drive for a win on May 8 at Darlington.