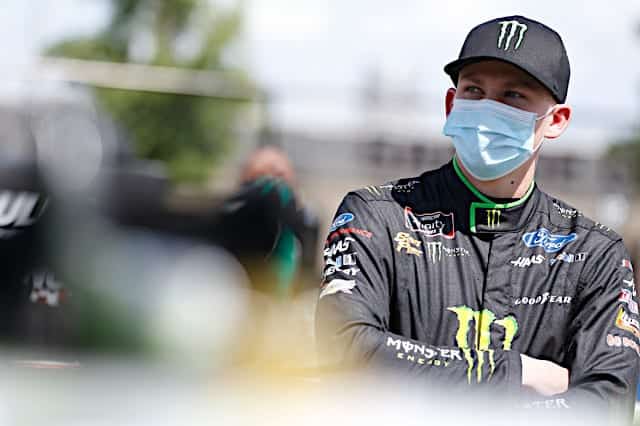 After a bit of a slow start to begin the 2021 NASCAR Xfinity Series season, Riley Herbst is starting to hit his stride.

Herbst, second-place finishing Austin Cindric and fifth-place Ryan Sieg were outliers when it came to contenders for the win. In a race mostly dominated by Chevrolets, this trio were the only Fords within the top 12 finishers with six of the top ten being Chevys.

After failing to finish three of the first four races of the year, Herbst continues to find his footing in his new ride at Stewart-Haas Racing. After two finishes within the top six within the three races going into this weekend, Herbst was strong again on Saturday.

Throughout the event, he was within striking distance of the leaders. That’s a key component of finishing well at a track such as Talladega and Daytona with the superspeedway package – being in place to pull off a late-race charge to begin with.

On one hand, Herbst’s finish with the race called off early could leave a thought of ‘what might have been’ for a driver seeking his first win of the series.

With the race being called, @rileyherbst secured a 4th place finish at @TALLADEGA! pic.twitter.com/NbY7rMdQOa

On the other hand, he now has a pair of top five finishes, half the amount that it took him all of last season to accumulate. Toss in that his recent finishes have come at a variety of tracks such as Talladega, Atlanta, and Phoenix, and Herbst is showing more and more that his recent showings are no fluke.

With the season barreling toward the critical summer months, that could end up being perfect timing for Herbst and SHR.