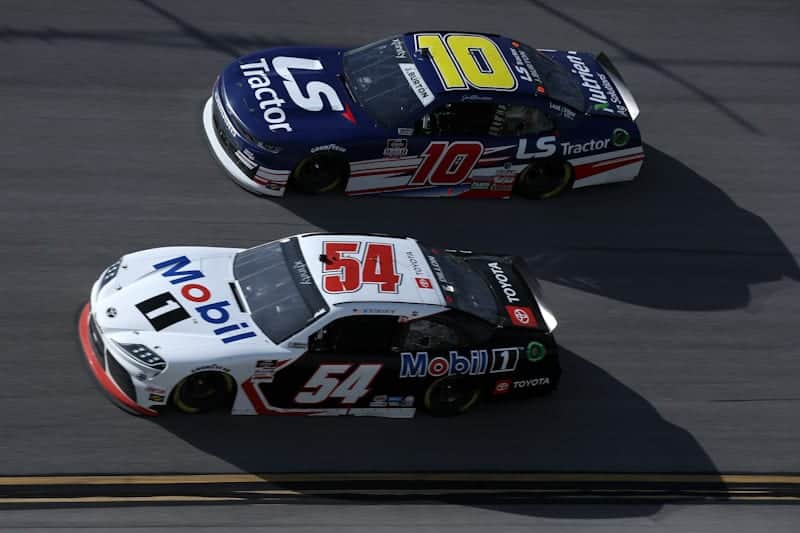 The skies were clear, and the sun was out when Jeb Burton took the lead on Lap 82, and the same was true on Lap 84 when the caution was displayed for an accident on the back straight. But by the time the race was ready to go green on Lap 91, the sun was gone, and the clouds full of water had rolled over Talladega Superspeedway.

Raindrops began to drop on the Ag-Pro 300 before the skies completely opened up and drenched the track as the NASCAR Xfinity Series field parked on pit lane, with Burton leading the way. It didn’t take long for NASCAR to declare the track was lost and the race official, with Burton becoming a first-time winner. He joins Ty Gibbs, Myatt Snider, and Josh Berry as first-time winners in 2021.

Noah Gragson’s sixth-place finish was enough to earn him a second straight Xfinity Dash 4 Cash check worth $100,000. His competition this week was Daniel Hemric (12th), Josh Berry (31st), and Brandon Jones (37th). Gragson gets a shot at another shot in two weeks. Winner Jeb Burton, runner-up Austin Cindric and third-place AJ Allmendinger join Gragson in the quest for the $100,000 prize at Darlington Raceway on May 8.

One thing I have criticized FOX about in recent years is that the NASCAR Xfinity Series (along with the Camping World Truck Series) has not been given enough opportunities on the FOX broadcast channel. Today’s race, one of the most exciting races of the FOX part of the Xfinity Series season, was on the big FOX network. FOX has 14 Xfinity races this season, and this is the only one to be on FOX instead of FS1. The first and final races on FOX’s portion of the Xfinity Series schedule should be on FOX, as well as a handful of others, including Talladega. That way, the up-and-coming stars of NASCAR are in front of more eyeballs. But if there could only be one Xfinity Series race on FOX, Talladega is the one it should be. While we had green flag racing – and while we weren’t on a commercial break – the racing was mostly exciting and promising for any potential first-time viewer.

A shoutout to the entire field and the talents of the racecar drivers out there is warranted. No major accidents occurred in the first two stages, much like the season-opening race at Daytona, another superspeedway. It is great when the field can make it to the final stage intact. The product was better for the conclusion of the race. Viewers also witnessed the restraint most of the drivers had in wanting to make it. Gragson’s “checkers or wreckers” attitude is fun to watch, but clearly, he takes after Chase Elliott and doesn’t want to ride around. It must be a number nine thing.

I’d regret not mentioning Jeb Burton here. It didn’t hit him that he was an Xfinity Series winner until he was done with his rain burnouts – which were cool to see. Then inside the garage, he climbed out of his car for the television interview and was immediately hit with emotion as he worked to hold back his tears. He hasn’t raced a full or near-full schedule of races for one series since 2015, when he qualified for 28 of 36 races for BK Racing in the Cup Series. Since then, he has taken occasional rides.

His performances last season driving for JR Motorsports propelled Kaulig Racing and Nutrien Ag Solutions to sign him for the entire 2021 Xfinity Series season. It was a long time coming for Burton, especially this season, as he has only failed to finish outside the top 11 once in the previous seven races in 2021. Burton has clawed his way to the opportunity he has this season, and now he can breathe easier as he is has a ticket to the Xfinity Series playoffs later this season.

I honestly can’t find something bad from the actual race itself, but let’s look at the broadcast. While I just praised FOX for putting the Ag-Pro 300 on the FOX network, the commercials may have been a tad too much. Without going back and actually counting laps, it seems that half the race was spent on commercial breaks. Superspeedways are a horrible place to go to full commercial break often. FOX did not utilize enough side-by-side commercials. Fans even missed the first lead change of the race because the broadcast was away from the racing action.

Everyone with basic knowledge of how television works is aware that commercials pay the bills, but there has to be a balance. Today was a great day to find new eyeballs for NASCAR and auto racing, and I hope that many weren’t turned away because of the plethora of commercial breaks.

When Germain Racing shut down following the conclusion of the 2020 NASCAR Cup Series season, Ty Dillon was unable to secure a ride in the series. He joined the Toyota camp for 2021 and was given the opportunity to drive four races with Joe Gibbs Racing in the NASCAR Xfinity Series behind the wheel of the No. 54 Toyota. Those four races have not gone as planned – not even close. At Daytona, he was the primary cause of the ‘Big One’ on Lap 102 of the season-opening race. Two weeks later, in Homestead, a stray bolt went through his radiator, ending his day. Then at Las Vegas, his spotter’s radio battery died, and he was unaware that Brett Moffitt was to his outside and crashed.

It is an understatement to say that crashing on Lap 84, especially when Dillon was not at fault, was a disappointing end to his four races in the JGR No. 54. The No. 07 of Joe Graf Jr. drifted up the track in turn two and clipped the left rear of Michael Annett, who spun right in the path of Dillon. Dillon’s Toyota drove straight into the side of Annett’s car but didn’t have much damage. However, Colin Garrett looked to split Dillon and the spinning Annett, but Dillon was attempting to regain control of his car and veered left when Garrett was driving past. After hitting Garrett’s car, Dillon was sent back up towards the wall, where he collected teammate Brandon Jones and hit the outside wall.

While the wreck in Daytona was arguably mostly his fault, the issues in the following three races have been none of his doing. It could not have been much worse for a driver attempting to stay behind the wheel. But Dillon and any prospective owners and sponsors out there don’t simply look at the final results. Dillon will be a prime example of how the final results don’t tell the whole story. While it never appeared Dillon was the fastest of the four Joe Gibbs Racing cars in any of his four starts, he did collect stage points in four of the eight stages. Ty Dillon deserves another shot with a top Xfinity Series team. Maybe he can put together the funds to get behind the wheel of the No. 81 for JGR later this season.

Everyone knows that superspeedways are the golden opportunity for the smaller, lower funded teams to sneak into victory lane. While the race didn’t fully play out, Tommy Joe Martins was the highest finisher among the smaller team. While Ryan Sieg and Brandon Brown did finish ahead of Martins, they have found themselves in the top 10 on multiple occasions this season. Today’s 11th place finish was Martins and his team’s best result of 2021 and best since a tenth-place finish at Texas last October. The good news for the smaller teams, we have two more superspeedways in the season, including one (Daytona) before the playoffs begin.

With the Ag-Pro 300 being an Xfinity Dash 4 Cash race, no NASCAR Cup Series regulars were allowed to race, but three NXS racers were also scheduled to run in the Cup Series race Sunday. Harrison Burton was slated to make his Cup Series debut  with Gaunt Brothers Racing. He finished 10th Saturday. Timmy Hill finished 13th for MBM Motorsports and returned to the Cup Series, also with MBM. Joey Gase had mechanical issues before the race started and finished five laps down in 36th. Gase was set to pilot a Davey Allison No. 28 tribute scheme in Sunday’s Cup Series race.

“I was just trying to do really big highlight moves and try to get on the big screen here and on TV. (…) A hundred thousand is nice, but I race for wins.” – Noah Gragson

Kaulig Racing is something special. First of all, It doesn’t matter who wins, how they won, or where the other two teammates finished. Every person on the Kaulig Racing roster is happy to see their organization succeed. Jeb Burton’s teammates AJ Allmendinger and Justin Haley were quick to congratulate him shortly after winning the race. Outside of first-time wins, we don’t see that type of respect and companionship among teammates too often. Saturday could have been Burton’s tenth career win, and the thrill of him getting Kaulig Racing back into victory lane would have delivered the same level of emotion from Allmendinger, Haley, and the rest of the team.

Second, Kaulig Racing’s mentality of superspeedway racing is reminiscent of what Dale Earnhardt Inc. gave Cup Series viewers in the early 2000s. If you are racing in the Xfinity Series in 2021 and want to win on a superspeedway, you will have to beat the three Kaulig Racing Chevrolets. They are formidable, tough, and their mentality seems to be that they don’t care who wins, just as long as they win, and the other two cars are second and third. All three teams and drivers buy into that, and that is a potent formula for success. After all, they have won four of the previous five superspeedway races.

Finally, I hope this isn’t the last time we see Ty Dillon in the Xfinity Series in 2021. It remains possible that he may get another chance with Gaunt Brothers Racing in the Cup Series this season, but that team isn’t going to be competing for wins outside of Daytona or Talladega.Dillon deserves another opportunity with Joe Gibbs Racing. As mentioned above, the final results don’t tell the whole story. I hope those at Toyota and JGR have taken note of that.

The NASCAR Xfinity Series is off next weekend for the fourth time in six weeks, but beginning at Darlington Raceway on Saturday, May 8, the Xfinity field races eleven weekends straight. The Steakhouse Elite 200 at Darlington is the third of four Xfinity Dash 4 Cash races, with coverage beginning at 1:00 p.m. on FS1 and MRN. The top finisher among Jeb Burton, Austin Cindric, AJ Allmendinger, and Noah Gragson will go home with an additional $100,000, courtesy of Xfinity. The final Dash 4 Cash race will be at the following week at Dover International Speedway on Saturday, May 15.

Ty DOES deserve a shot at a good, full season ride. I’ve watched each Xfinity race this year and he has been bit by bad luck. I don’t know the “gel” he and the crew chief have but many JGR should hire someone from Germain as Ty often overperformed in an underfunded car. “Racing Gods” be damned but it might be time for him to become a crew chief or spotter.