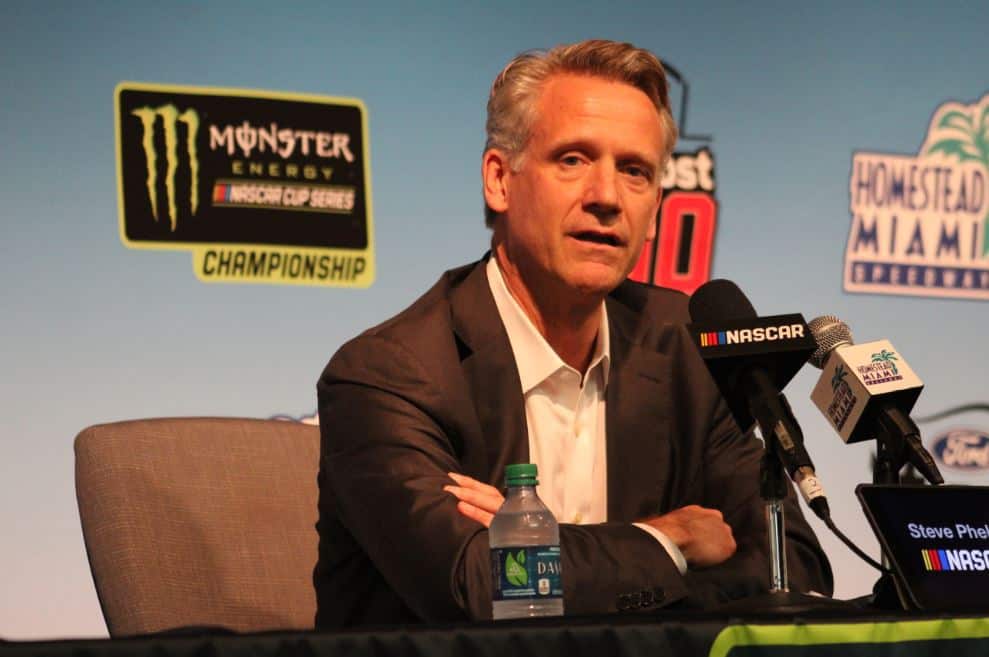 Just a few hours before the NASCAR Cup Series race at Talladega Superspeedway Sunday (April 25), NASCAR President Steve Phelps addressed the media as part of an announcement regarding NASCAR’s new national partnership with the Boys and Girls Clubs of America.

After that news, Phelps took a few questions on high-profile topics related to the sport: Jennifer Jo Cobb not being approved for Sunday’s Cup race, NASCAR’s COVID-19 vaccination policies and its stance on restrictive voting laws recently passed in states it competes in, like Georgia.

On a day that NASCAR announces an inclusion partnership, how would you address the optics of a female driver with more than 200 national series starts not being approved for an event and a driver approval process that seems ambiguous at best on who is allowed to compete, when and where?

Phelps: I think that obviously your question [revolves] around Jennifer Jo Cobb and her not being approved. You know, Steve O’Donnell, Scott Miller, Elton Sawyer, these guys have decades of experience in this sport. And in their opinion, Jennifer did not have the experience necessary in order to run in the Cup race.

I understand that it may seem ambiguous to those outside. But I think that they have their finger on the pulse. And in their opinion, Jennifer wasn’t ready to race in this race. With that said, to your point, on a day where we’re talking about inclusion, would love to have female drivers racing in our top series, that’s something that we very much would be interested in doing. So we’re trying to diversify our driver corps.

You know, women, people of color, those are things that are very important to this sport. But as it relates to Jennifer, the group felt she was not ready.

So far, I’ve only seen Bubba Wallace and Denny Hamlin post about getting vaccinated. Just wondering, what are you guys doing from a sanctioning body standpoint to encourage drivers to get vaccinated?

As relates to the driver corps, I think you’ll probably see more and more. And we’ll ask the drivers, frankly, to try to help promote the vaccination process. I think it’s really important. They have a voice. And that voice carries a lot of weight, to the degree that we can help with folks who are uncertain about whether they want to get the vaccine, I think it would be critical to have those with the loudest voice within the sport talking about their vaccinations.

I wanted to follow up on that question. IndyCar is requiring drivers and crew members to either be vaccinated or have a negative test daily during the Indy 500 week. Have you considered that type of policy? And have you decided one way or the other? Why or why not?

Phelps: It’s a bit of a slippery slope, right? I won’t talk out of both sides of my mouth. It is important, in my opinion, that people get vaccinated. And I’ll say that for me, personally. We’ll continue to monitor and change our policy as necessary in order to make sure that people are safe. So we are certainly monitoring and won’t get into the numbers specifically, but the number of people who are in this garage that have been vaccinated continues to steadily rise. So we track that through our process on a weekly basis as people are filling out their health forms, through their phone or online.

You mentioned earlier this year there were discussions about NASCAR potentially going to a hybrid electric model in the future. So I’m wondering if there’s a timeline for when you expect we could see some of those moves toward electrification.

Phelps: Right now, it’s something that we are certainly having a lot of discussions with our OEM partners about. The NextGen car will certainly will have the opportunity if we decided to go to some form of electrification or a hybrid engine, the NextGen car has the opportunity for us to drop that engine in there. The timing of it? It’s a difficult one, right? I would have said before COVID, you know, we’re maybe looking at 2023.

Timelines are tough, just because we need to make sure that all the stakeholders who matter in this discussion, which are race teams, our OEM partners, that they’re all aligned on what that would look like. And so it could be 2024. I think, frankly, the opportunity to have a new OEM partner will largely depend on what happens with that hybrid engine.

Steve, as often noted, NASCAR took some bold steps with social justice and its positions over the last year. There’s been a lot of strict voting laws passed in states of late. Does NASCAR have a position on any of those laws as some of them are in states that NASCAR does race in?

I don’t think that’s an area [voting rights] that we are going to lean in. I think that we can probably do a better job pushing the diversity, equity, inclusion and some of the social justice issues in places that are not kind of in that particular area. [It] doesn’t mean it’s not important.

As of now, the answer would be no.

This guy would make Brian France proud with all his side stepping of questions and hypocrisy in his responses. Another CEO that thinks we are all stupid.

Steve should run for President. He can lie with the best of politicians and business men.

Why even bother asking questions of these guys? It’s very rare (if ever) to get a straight, honest answer.