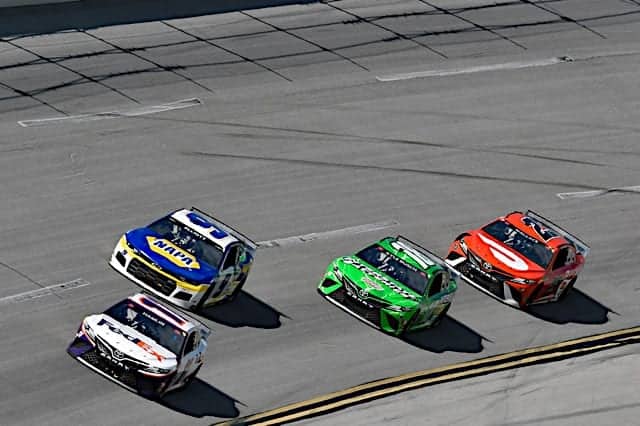 In recent years, Martin Truex Jr. and Denny Hamlin have repeatedly factored into who’d emerge with a race victory on super speedways at Daytona and Talladega.

But on a day mostly dominated by Fords on Sunday at the mammoth Alabama speedway, Toyotas didn’t end up factoring in a victory as a Ford-laden field duked it out for the win with Brad Keselowski taking the race victory.

There’s no other way to sum up Sunday at Talladega for the Toyota camp than this: an opportunity lost. The top finishing Toyota was Christopher Bell in 17th, a spot ahead of Kyle Busch. That ended up being a bit too far back for the JGR cars and other Toyotas to garner much momentum toward the front.

Heading into Sunday, Hamlin had six top-five superspeedway finishes in a row, a stat that’d make him an easy favorite. He wouldn’t be around in the end to factor in the win, though, finishing 32nd. Hamlin’s day was highly eventful. First, there was contact near the end of stage one that resulted in Joey Logano’s car barreling over multiple times and bounced off the 23XI car owned by Hamlin and driven by Bubba Wallace.

"I'm telling you, my underwear is worse than the car right now."

Hamlin would also be hung up in the middle of another multi-car incident at the end of the second stage that also damaged the car of Joe Gibbs Racing teammateTruex Jr., falling off the lead lap with a damaged No. 11, and sustaining two pit-road penalties.

It goes from bad to worse for @dennyhamlin!

While serving a penalty for speeding on pit road, the No. 11 is too fast entering ?????! Hamlin now runs 35th, one lap down. pic.twitter.com/0cyvY0zNBQ

One of the few solaces for Toyota was Wallace. Despite the earlier damage, he’d go on to win the second stage, the first of his career, before making a late pit gamble and finishing 19th. Harrison Burton, making his Cup debut with Gaunt Brothers Racing, finished 10th in stage two and was running in the top 10 late but fell to 20th at the finish.

A race to the end of Stage 2 and a block by Keselowski kicks off a pileup involving Denny Hamlin, Chase Elliott and others.

And Bubba Wallace picks up the stage win! pic.twitter.com/bKeOvZakl0

As for Truex? He fought through the earlier damage to make himself a factor in the late stages before losing a tire, bringing out the race’s final caution.

In a style of racing that at times lends itself to alliances among manufacturers, Toyota wasn’t around to be part of the fight when it mattered most.

Needless to say, given that August’s event at Daytona will help factor into the late rush for a NASCAR Playoffs spot and the return to Talladega being in the Playoffs, Sunday afternoon offered some teachable moments for the Toyota camp.

They’ll certainly have time to stew over what happened Sunday and atone for it between now and then.

Bubba was running 27th and fading fast when he took that late ” gamble ” for tires. He finished 19th thanks to that gamble.

I looked at the headline and almost cried…tears of joy. Bubba did what he usually does and so did Hamlin.

I assume you’re Native American since you so clearly hate anything “imported!”

Thought that nobody had anything for the Fords who worked together very well. Hamlin certainly lost the plot and took himself out of contention. Truex and Wallace did pretty well but weren’t going to beat the Fords.