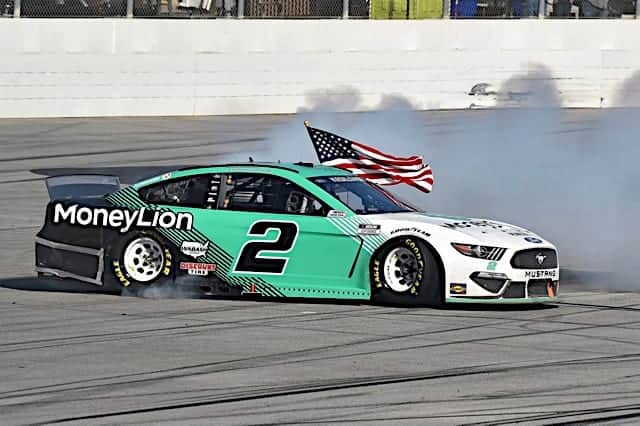 The most important one.

Sunday (April 25) afternoon’s GEICO 500 featured a flip for the first time in 2021, 35 lead changes among 17 different drivers and battles throughout the field.

However, Keselowski mostly stuck to the middle or back of the pack until the final restart, when he shot to the front and scored his sixth career win at Talladega Superspeedway.

“Merry Christmas, Regan!” Keselowski said to FOX Sports’ Regan Smith after the win. “Oh, man, what an awesome day today to…[be] in victory lane. The whole race, I had a couple opportunities to take the lead. But, I just kept thinking, ‘man, just keep your car in one piece till the end,’ and we’ve been so close here.

“…I’ve been on kind of a four-year drought here, but it’s nice to get [win] number six. I never dreamed I would’ve tied Jeff Gordon or Dale Earnhardt Jr., those guys are really legends. So really proud of my team, had the accident there early and recovered. Got it fixed up to where it could keep running and my crew chief Jeremy Bullins had a lot of confidence.”

For as much single-file racing there was in February’s Daytona 500, the GEICO 500’s entire opening stage and more than half of the second consisted mostly of two- and three-wide competition, which turned to largely single-file packs in the later stages.

Despite all of the Toyotas outside of Kyle Busch being forced to start in the back for A-post violations, Bubba Wallace raced his way from dead last to the front by lap 12. The No. 23 led several circuits before the pack began shuffling again, but the entire TRD stable showed speed early.

On the final lap of stage one, Joey Logano ended up becoming the first driver to flip in any NASCAR series this year when contact from Ricky Stenhouse Jr. turned Denny Hamlin into the No. 22’s quarter panel.

Logano’s car, running on the high side, spun down the banking and flipped up and over, slamming down on the roof and sliding on the asphalt before its momentum rolled it back onto all fours.

The car came to a halt in the grass and Logano exited under his own power, but was clearly shaken by his first time upside down in 12 years.

"I'm one hit away from the same situation Ryan Newman just went through."- Joey Logano pic.twitter.com/3J9uDCc7u3

Stenhouse, Wallace and Keselowski were all involved in the crash. Wallace’s damage was largely superficial, but Logano flipped directly in front of the No. 23 and the Toyota driver slightly clipped the tumbling Ford.

Amid the chaos, Matt DiBenedetto ended up the stage winner, followed by Ryan Blaney, Chase Elliott, Hamlin and William Byron. It was DiBenedetto’s first career stage victory. The No. 21 nearly lost it several dozen laps later, blocking late and nearly turning himself and Kyle Busch into the inside wall.

As if looking in a mirror, the second stage ended the way the first did: under caution. A wreck as the white flag flew prompted the yellow flag this time when a Keselowski block sent Hamlin and Martin Truex Jr. into the wall while Hendrick Motorsports teammates Elliott and Alex Bowman slid through the infield.

Like DiBenedetto in stage one, Wallace scored his first stage victory in stage two.

The field decided to calm down in the final stage, running largely single-file through the last round of green-flag pit stops. The field had just started to bunch back up when Quin Houff‘s No. 00 shot into the turn 2 wall, setting up a restart with 13 laps remaining and Erik Jones, in a Tuskegee Airmen tribute paint scheme, out front.

Jones faded back on old tires as a sextet of Fords – DiBenedetto, Blaney, Keselowski, Kevin Harvick, Michael McDowell and Chris Buescher – shot to the front. A pack that was mostly single-file was reset for an overtime finish when Truex, tooling around on the apron with a damaged car, lost his tire in the trioval.

DiBenedetto led all the way to the white flag before moving up to block the outside lane, giving Keselowski an opening to take the lead. No one in the field could get a run. While McDowell attempted to make a charge coming to the checkered, Keselowski held off all comers to take the win as the field crashed behind him.

Brad @Keselowski WINS as they crash behind him at Talladega! Retweet to congratulate @Team_Penske and the No. 2 crew. pic.twitter.com/3SCDHAgocM

Byron, McDowell, Harvick and DiBenedetto followed the No. 2 as the top five. Kaz Grala, Tyler Reddick, Austin Dillon, Blaney and Cole Custer filled in the rest of the top 10.

“I’m so excited,” Keselowski said after the race. “I’ve got my daughters, they’re in the motor home lot…they finally got to see Daddy win, so that’s pretty cool.

“I saw [the run] coming,” he added. “I was like ‘oh, god, please, if I can just get to this line, put it on the other side’ like Daytona, but that’s their job. Everybody’s just racing hard, pushing hard and that’s Talladega.”

After four races at the two extremes – three at short tracks and one at a superspeedway – the Cup drivers head to the Midwest for a slightly more “normal” race. Kansas Speedway will host the Buschy McBusch Race 400 on Sunday, May 2 at 3 p.m. ET. Denny Hamlin is the defending winner of the spring race, and coverage of this year’s running will be aired on FS1.

Why wasn’t Bubba sponsored by the Tuskegee Airmen?