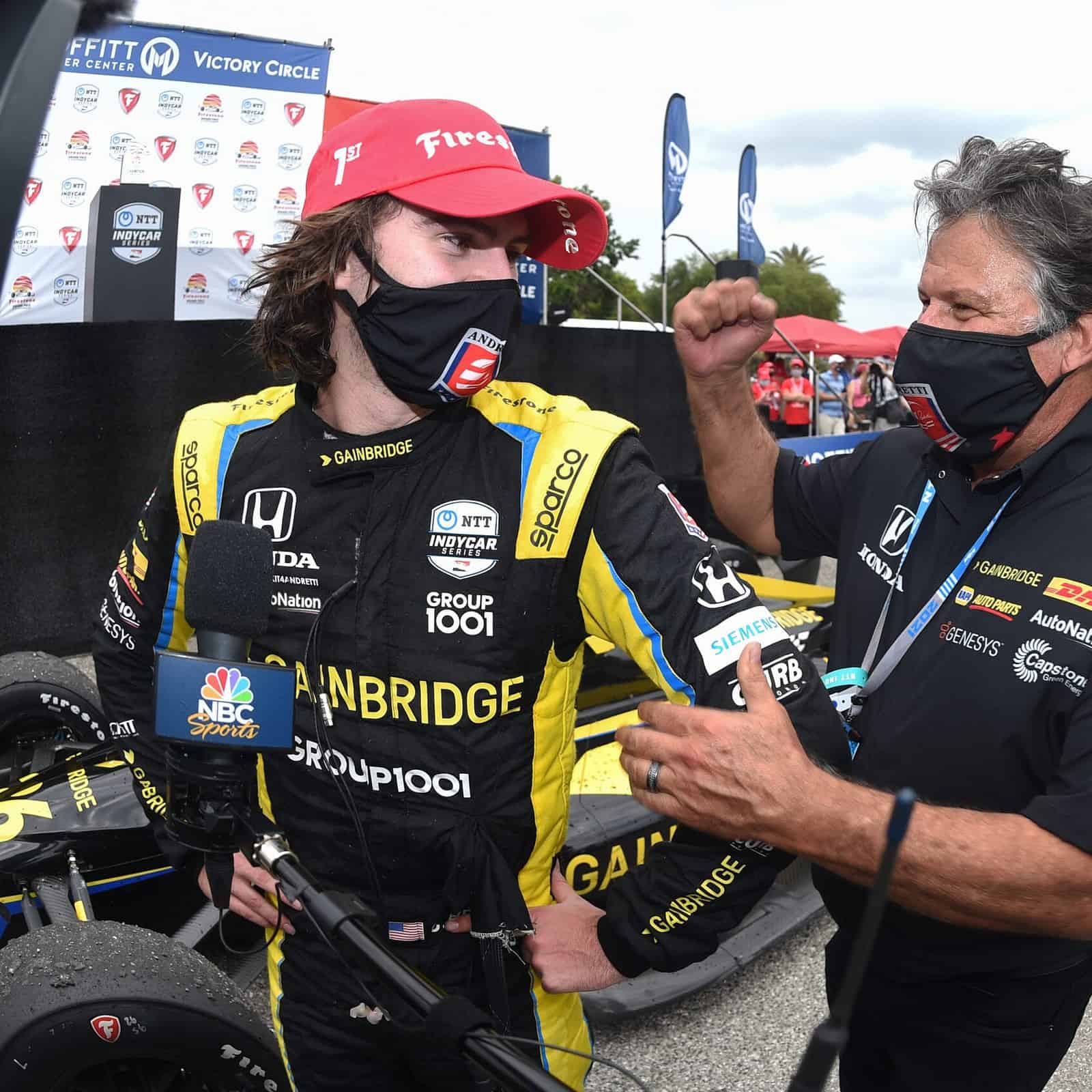 After being taken out by a spinning Josef Newgarden at Barber Motorsports Park last weekend, Colton Herta needed to jumpstart his IndyCar championship hopes. He did so with a commanding drive to victory in Sunday’s (April 25) Firestone Grand Prix of St. Petersburg.

The Andretti Autosport driver started on pole position and was the class of the field for the first half of the race, stretching out a 10-second lead over Newgarden after the Team Penske driver passed Jack Harvey for second place on lap 31.

Herta’s gap evaporated when a safety car came out with 27 laps left in the race. However, the young Californian retained the lead on the restart despite Newgarden’s No. 2 Hitachi Chevrolet being clad with grippier red sidewall tires.

Another safety car with 21 laps to go kept Newgarden in the fight, and the two-time series champion applied consistent pressure on Herta when the race resumed with 17 laps left. Newgarden ran within a second of the No. 26 Gainbridge Honda until lap 93, when Herta extended the gap to over two seconds to take his first street course win.

Newgarden came home in second, a positive result following the season opener at Barber that ended on the first lap. Both he and Herta were thrilled with this rebound performance. For Herta, it was his first career victory on a street course and fourth INDYCAR triumph overall.

“Sorry, I can barely talk, I’m so winded,” Herta said after jumping out of the car. “I’m so happy to rebound from Barber and get the momentum going for the season.”

Takuma Sato had an excellent race after starting in 15th, carving his way through the field to finish sixth behind Scott Dixon. He muscled his way past James Hinchcliffe on lap 23, with Hinchcliffe turning in on the Japanese driver and coming off worse for wear with a flat tire.

Later, Sato made a thrilling pass on lap 29, going three wide on the front straight to pick off Rinus VeeKay and Pato O’Ward into turn 1.

However, it all came undone for Rahal when Rossi emerged in front of him after his pit stop on lap 37. Rahal, with tires already up to temperature, went for a move on Rossi’s inside, but the Andretti Autosport driver attempted to hold position. The two banged wheels, puncturing Rossi’s front right tire.

With Rahal on Rossi’s outside, Rahal had nowhere to go as Rossi could not turn the car into the next left hander, forcing both cars toward the right side of the circuit. Rossi, who ran as high as seventh, managed to get going again, but a pit stop for new tires and a front wing spoiled his day (21st).

Will Power, who started way down in 20th, came alive in the second half of the race to place eighth, despite having a feisty, contact-filled battle with Romain Grosjean in the early stages of the race.

Jimmie Johnson’s day went south on lap 16 when he locked up going into turn 13, running off track and lightly touching the tire barriers. The NASCAR champ’s off-track excursion brought out a caution as he needed help restarting his No. 48 Carvana Honda, putting him several laps off the pace. Johnson later spun coming out of turn 3 with 27 laps to go, causing the caution which negated Herta’s lead over Newgarden.

Last week’s winner Alex Palou has kept the points lead after two events. Power is tied for second place with Dixon, the pair of them now only two points behind the Spaniard, 67 to 65. St. Petersburg victor Herta leapfrogged almost the entire field to go from 21st to fourth in points, five behind Palou.

Next weekend, IndyCar visits Texas Motor Speedway for a doubleheader on the 1.5-mile oval. The Genesys 300 kicks off the weekend on Saturday, May 1 at 7 p.m. ET with coverage provided by NBCSN.

I hope Jimmie is enjoying his new ride because he’s doing exactly what is expected.

JJ car looked like it just snapped spin on him. He is showing this is harder than its looks.