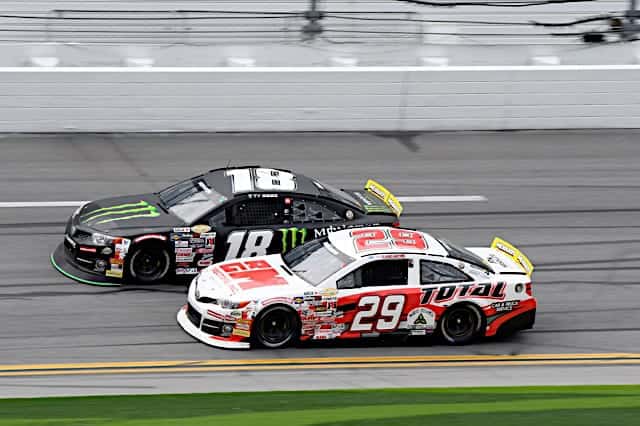 Following his horrific crash into the wall in the ARCA Menards Series race Saturday (April 24) at Talladega Superspeedway, Derrick Lancaster remains at UAB Hospital in Birmingham, Ala. He is in critical but stable condition Sunday, The Pit Lane tweeted, after Lancaster’s wife Beth provided an update.

“There are, in fact, a couple of slight burns in the throat but the plan is still the same,” she wrote. “Ventilator 48 hours with slow weaning starting tomorrow. Burns remain the same. So far, no graphs appear to be warranted at this time. The nurse lowered his sedation medication to see if he could follow simple commands and he did! Opened his eyes, squeezed her hand both sides, and wiggled all toes.”

Mrs. Lancaster previously posted two other updates on her husband after his race ended with the violent crash on lap 71.

“No burns to the trachea or lungs,” she initially said. “He will be on the ventilator for 48 -72 hours to allow the lungs to recover from the extreme heat and so they can suction the soot out. Labs are looking better every hour.”

Earlier, she stated, “Right now, he is on a ventilator until they access the lung damage. He will be on it for at least 48 hours. 2nd and 3rd degree burns to both arms, neck, and face. Nothing internal as far as breaks or bleeding. They will debride his arms and take him to the trauma unit where I’ll be able to lay eyes on him and touch him. He will not know I’m there but that’s OK.”

Lancaster was running inside the top 10 when contact from race winner Corey Heim, following a bump draft from his Venturini Motorsports teammate Drew Dollar, sent the 48-year-old Virginian right into the outside wall. His No. 29 Toyota burst into flames before spinning and coming to a rest at the bottom of turn 3.

Lancaster walked away from the fiery crash, but medical personnel laid him on a stretcher. From there, he was taken to UAB Hospital after an initial evaluation.

The driver of the No. 29 ultimately finished the race in 23rd place.

Overall, Lancaster has made seven career ARCA starts, including two this year at superspeedways, Daytona International Speedway and Talladega. He has two career top 10s, both sixth-place finishes at those tracks.

Prayers to everyone involved; Derrick, family, team and friends. I wish this man a speedy and 100 percent recovery.

Shame on fox for doing a follow up or mention this on Sunday. I watched most of the pre race and I didn’t hear a thing. If I missed it so be it. I think the cup cars do have a suppressor system in the cars. Not sure because I haven’t heard anything about it lately.

Agreed. The only thing Fox mentioned about it was that there was an ARCA race and that’s why there was some speedy-dry on track at the start of the race.