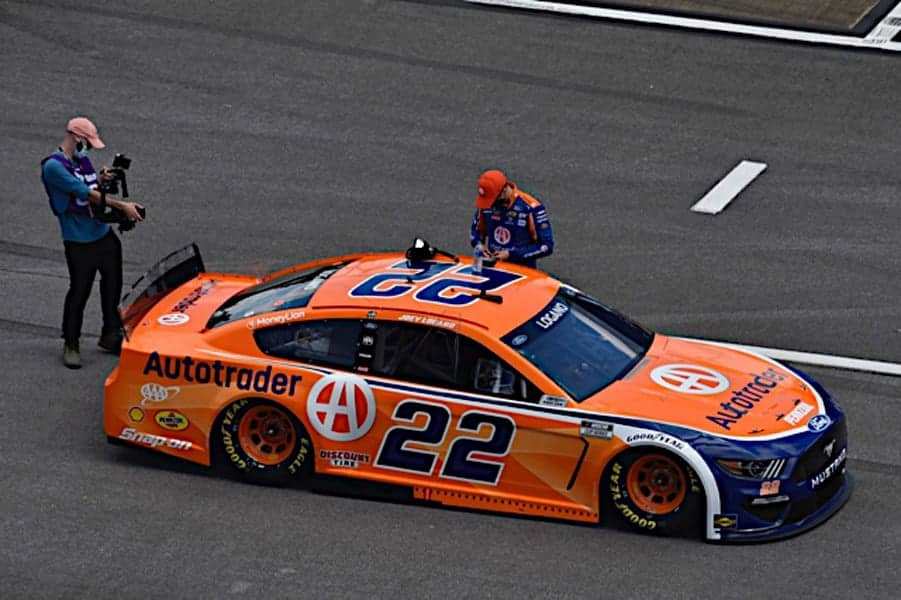 As the field raced on the final lap of stage one of Sunday’s (April 25) GEICO 500 at Talladega, Joey Logano was in the middle of the pack and in contention for some stage points entering the backstretch.

By turn 3, Logano was sliding on his roof, launched airborne and wrecked out of the race.

Denny Hamlin tried to make a move with a push from Ricky Stenhouse Jr. as the cars drafted entering the turn. However, Hamlin hooked Logano, sending the 2018 NASCAR Cup Series champion’s No. 22 flipping over in turn 3, reminiscent of Ryan Newman‘s accident at Talladega in 2009.

Logano climbed out of the car under his own power, unhurt after a full checkup in the infield care center. Clearly shaken, he slammed the product of superspeedway racing, comparing the incident to Ryan Newman’s crash in the 2020 Daytona 500 that nearly ended in tragedy.

“When are we gonna stop?” he added. “This is dangerous. I’ve got a roll bar on my head. That’s not OK. I’m one hit away from the same situation that Ryan Newman just went through. I just don’t feel like that’s acceptable.”

That was a hell of an interview from @joeylogano there. Lots to unpack. Raw and honest thoughts.

? "When are we gonna stop? This is dangerous. I've got a roll bar on my head. I'm one hit away from a Ryan Newman situation."

Called it "unacceptable" and is "happy (he's) alive."

Meanwhile, Bubba Wallace had a close call as he narrowly avoided Logano’s No. 22 as the car slammed into the ground. Wallace sustained some damage to his car as he hit Logano’s.

Brad Keselowski, Chase Briscoe and Stenhouse were also involved in the wreck but none of them incurred heavy damage. Keselowski went on to win the race while Wallace wound up winning stage two.

Logano finished in 39th place and was the only driver eliminated in this incident.