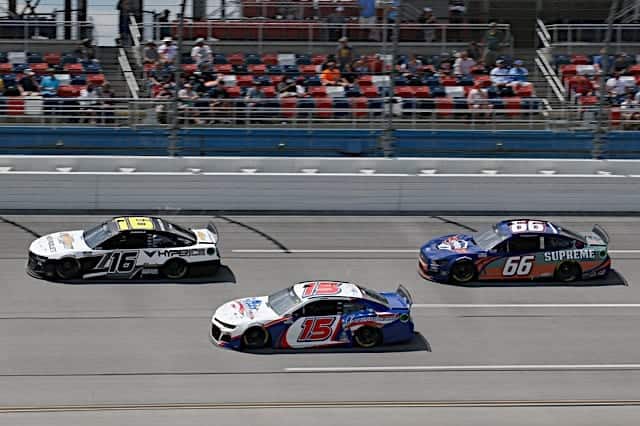 Both Kaz Grala and Kaulig Racing continue to impress in each of their NASCAR Cup Series outings.

Grala piloted Kaulig’s No. 16 Chevy to a sixth-place finish in the GEICO 500 at Talladega Superspeedway on April 25, the best Cup finish to date for the young driver and team. The result completed a stellar weekend for the team, as Kaulig went to victory lane in the NASCAR Xfinity Series the day before via Jeb Burton‘s first career win.

For Grala, it marks his second career top 10 in just his third start. His previous top 10 came behind the wheel of Richard Childress Racing’s No. 3 at the Daytona International Speedway road course last year while Austin Dillon was sidelined with COVID-19. His only other start was with Kaulig in this year’s Daytona 500, which ended prematurely due to a fire in his brake line.

“I tried to [make the most of the limited start], and I feel like we did today,” Grala told FOX Sports. “We had a really good Hyperrice Chevy. Kaulig Racing did a great job today. … But, I was just happy to get to pilot this thing. It is few and far between when I do, but I try to make an impression on my few starts and [I] feel like today was a good step in the right direction.”

For Kaulig, the team’s only other top 10 came on the Daytona road course earlier at the hands of AJ Allmendinger. The team, which fields three full-time Xfinity cars, has now finished in the top 10 in half of its four Cup races.

Grala told Frontstretch earlier in the week that the team plans to just enter him in the Cup superspeedway races this year and Allmendinger in the road courses. But Kaulig has said he is in the market for a charter for the 2022 season.

Grala hopes results like Talladega pave the way for his landing a full-time ride, something the 22-year-old Boston native hasn’t had since 2017.

“Didn’t have the best luck at Daytona, [but we] rebounded here with a top [10],” Grala said. “I think that’s a great boost of momentum for us. Hopefully, it will be just another piece of the puzzle for me to get a full-time ride some time down the road.”

What a drive, @KazGrala! From outside the top-15 taking the white flag, to a photo-finish for 6th!

He kept his @Hyperice Chevrolet ZL1 1LE in prime condition all day long and was in position when it counted!

Meh, not the way I see it. He bulldozed his way through Erik Jones and Ross Chastain going into the tri-oval, forcing Chastain below the yellow line as a result. That should be grounds for a penalty. If NASCAR penalized DiBenedetto and Buescher’s finishes last fall under the same circumstances, NASCAR should do the same with Grala. He should finish P26 in my book.

I saw it the same way.