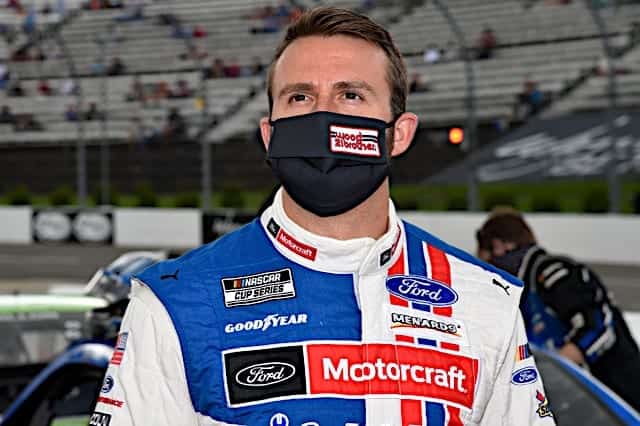 If Matt DiBenedetto felt like he was experiencing Talladega déjà vu, he cannot be blamed despite leading the field heading into the only overtime restart of Sunday’s GEICO 500 at Talladega Superspeedway.

Certainly the 10th round of the NASCAR Cup Series season started off promising for DiBenedetto and his No. 21 Wood Brothers Racing Ford Mustang team. Starting from 13th, DiBenedetto urged his way to a stage one victory, a moment of the race that featured a rather harrowing moment for Joey Logano with his car flipping in turn 3.

Although stage two was somewhat quiet for DiBenedetto with a 17th-place result, the 29-year-old Grass Valley, Calif. native had another fast Mustang prepared by crew chief Greg Erwin. Throughout the course of the final stage of the GEICO 500, DiBenedetto raced wisely, aggressively and on the offensive as he pursued the 100th Cup win for his storied racing team.

Leading the way with Team Penske allies Ryan Blaney and Brad Keselowski drafting with him respectively in the second and third positions, it appeared as if DiBenedetto was in the right position for a sentimental win at Talladega. Instead, a caution for debris on the fronstretch came out with just three laps remaining for the race’s original distance.

As a result, DiBenedetto and his challengers prepared for an overtime restart. By all means, it would seem like the odds were in DiBenedetto’s favor with his Ford comrades around to stave off challenges from the likes of William Byron, Erik Jones and Ricky Stenhouse Jr. to name a few.

Taking the green flag for the race’s sole overtime restart, DiBenedetto appeared to get up to speed efficiently and effectively, essentially looking to be in the prime position for the win. Restarting alongside Blaney, DiBenedetto got some hardy bump drafts from Keselowski to clear Blaney heading into turn 2.

Coming to the backstretch on the penultimate lap, DiBenedetto committed to the inside line and it appeared to be the correct decision as he took the field to the stripe for the final lap.

On the final lap of the GEICO 500, DiBenedetto swerved to the outside line, abandoning the drafting efforts of Keselowski into turn 1 on the inside line. DiBenedetto’s move slowed the progress of the outside line led by Blaney, giving Keselowski the preferred inside groove, momentum and the Talladega victory.

Dropping from a possible win to a fifth-place result, DiBenedetto was understandably disappointed but provided some hope for his fans as well as Wood Brothers Racing supporters.

"Our day will come … driving for @woodbrothers21, it really is a dream come true."

Positivity from @MattDRacing in Talladega after being so close, once again, to his first Cup Series victory. pic.twitter.com/DwJPwv9TdU

“Oh, man,” DiBenedetto said with a smile to FOX NASCAR pit reporter Jamie Little following his latest bid for a win. “You can say it after every one of these races, you know? It’s tough. It’s just all so circumstantial. We talked about it a lot before the race. It’s tough.

“Our day will come! Our day will come. I’m just lucky to drive this thing and have the support from everybody. Fans, they are so awesome. Driving for the Wood Brothers, it really is a dream come true. Gosh, I’m so close to so many of these things. The Fords are so fast. They believe in me. They do an excellent job. I love what I do. Our day will come. We’ll get there.”

Also we ended up 5th, not 6th. So… first top 5 of the season and Matt’s 2nd top 5 consecutive talladega finish. (Yep, went there. Still salty over the last trip here)

Although DiBenedetto and the No. 21 team wish they had the rewind powers of Max Caulfield from the Life Is Strange roleplaying games, the hardy driver can take heart that he moves to 17th in the championship standings, five positions higher than he was after the Blue-Emu Maximum Pain Relief 500 at Martinsville. Moreover, DiBenedetto can carry some momentum over to next Sunday’s Cup race at Kansas Speedway where he placed 12th in last fall’s playoff race.