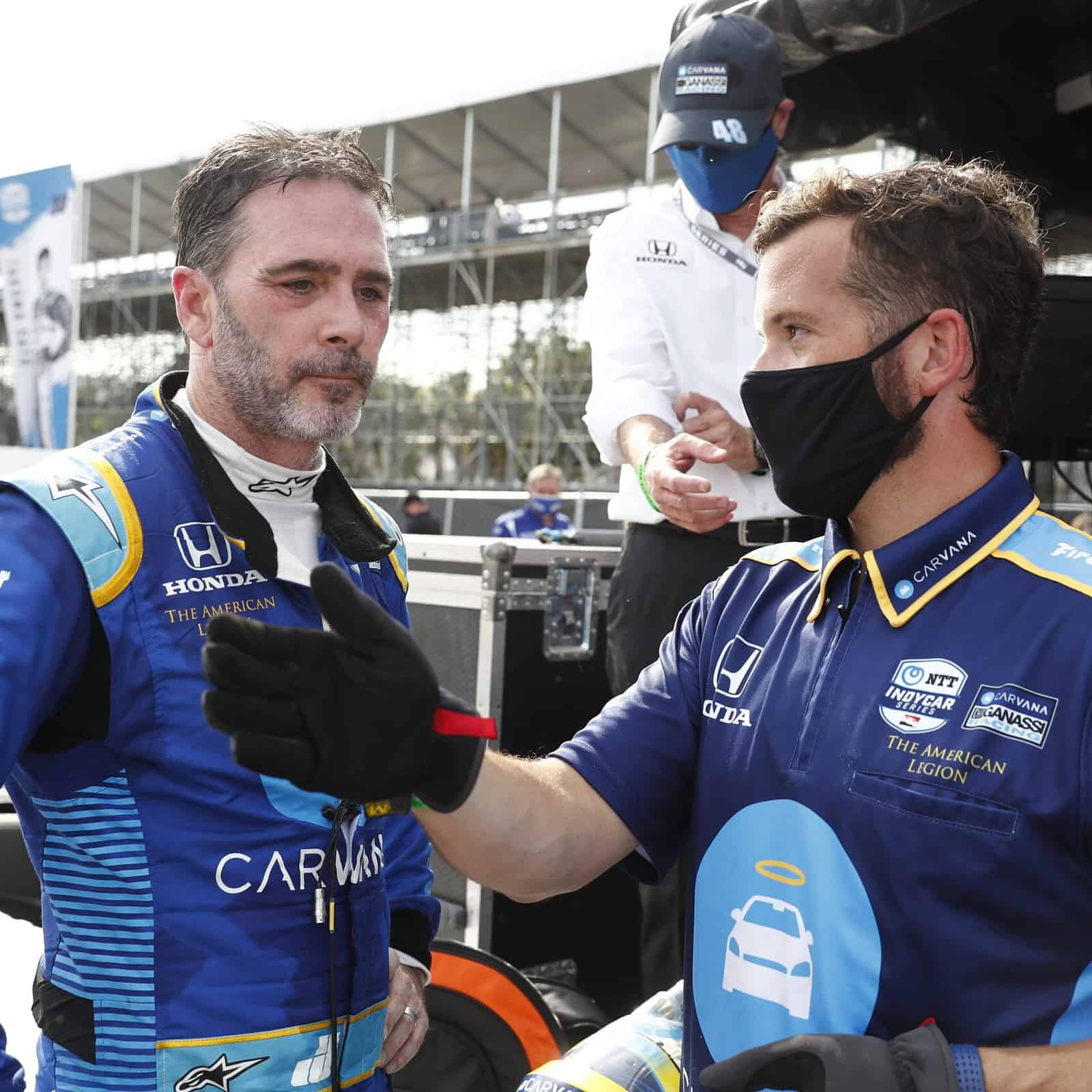 Before Sunday, Jimmie Johnson had never raced on a street circuit. Aiming to learn, Johnson did all of that and more in Sunday’s (April 25) Firestone Grand Prix of St. Petersburg, the second race of the 2021 NTT IndyCar Series season.

The No. 48 Carvana Honda started 23rd and ran as high as 21st following a few pit stops, but unfortunately that’s when things started going sour for the seven-time NASCAR Cup Series champion.

Johnson locked up his brakes going to the final hairpin turn on the circuit, lightly brushing the tire barrier with the left front of the car. Selecting reverse gear might not have been something the two-time Daytona 500 winner had practiced, but Johnson was trying his hardest under constant radio instruction from the pit stand.

Another couple of minutes pass by.

“Emergency mode, and hold the clutch, get it in reverse and let it out real slow.”

“It’s not selecting anything,” Johnson said.

After getting pointed in the right direction and restarted by the AMR Safety Team, Johnson made it back to the pits, albeit a few laps down.

While Chip Ganassi Racing teammates Scott Dixon and Marcus Ericsson were in the top 10 and Alex Palou was setting the fastest lap, Johnson was still getting used to racing on a street circuit for the first time in his life. Turning in 77 laps in all the practice sessions did help.

So let’s take a bit of a deeper look into Johnson’s laps around the 1.8-mile street course that includes a runway from the Albert Whitted airport as the main straightaway.

Taking the best micro sector times from around the track, Johnson’s optimal lap around St. Petersburg was a 1 minute, 2.2677 seconds. That lap time is only 0.00426 seconds faster than the best lap the Californian was able to put together.

Going through the individual stints now, Johnson set his fastest lap of the first stint on the ninth lap going around the track in 1 minute, 3.2165 seconds. Unfortunately, the first stint of the race was marred by Johnson getting stuck in the tire barrier at turn 13 on lap 15.

What’s interesting about that lap is that Johnson was gaining several hundredths of a second in each micro sector on the first half of that lap. In fact, until the exit of turn 9, Johnson was .2419 seconds faster on that lap than his fastest first stint lap of the race.

Johnson’s next stint had a slow 73-second lap that could probably be attributed to trying to let leaders through on track. After taking the next lap to clean off his tires, Johnson then ran every lap but one in the 63-second time bracket until his spin on his 68th lap.

After the final caution, Johnson’s lap times were a bit more erratic going all over the 63- to 65-second time brackets. However, Johnson did manage to finish the race with all four wheels still on the car, crossing the line 22nd.

“Unfortunately I made two mistakes on older tires,” Johnson said in a post-race video. “I could feel the car losing some grip and being a little more difficult to drive, but I thought I could stay on top of it and just got behind in (turn) 13 and locked up the fronts. And then I had a really loose car through the high speed stuff and it got away from me in turn 3. Both situations I needed to put a new wing on the front, was able to get back out and get going.

“There certainly were some bright spots, the pace was there, really putting together the run from old tires to old tires is something I need to work on, but I had a blast here at my first street race. It is more physical and more difficult than these drivers ever make it look so a huge credit to all of them and how easy they make this look.”

On a slightly humorous note, Johnson does have one bright spot to his day in St. Petersburg. Going from the start/finish line on pit road to the pit out line, Johnson had the fastest time on that section of pit road by 0.0019 seconds over James Hinchcliffe. Sure, everyone’s on the pit limiter, but Johnson was the best at it.