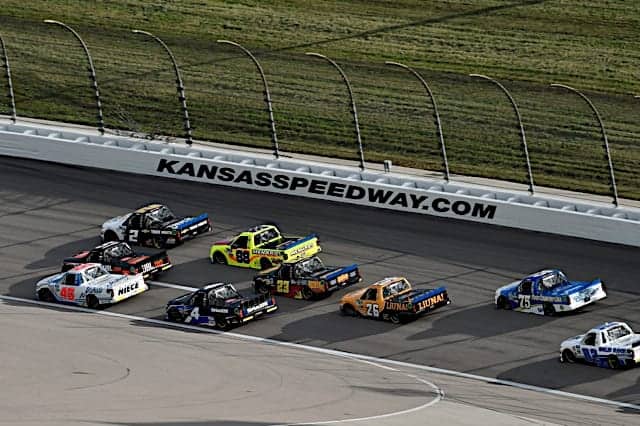 The NASCAR Camping World Truck Series returns to action after a week off for the Wise Power 200 at Kansas Speedway.

Forty-one trucks are entered for 40 spots. Due to a lack of points, Trey Hutchens III will not make the race in his own No. 14 Chevrolet.

Chase Briscoe will make his second start of the season for Roper Racing in the No. 04 PIC/Carquest Ford. The NASCAR Cup Series rookie also competed for the team at the inaugural Bristol Motor Speedway dirt race.

Grant Enfinger will pilot the No. 9 Grant County Mulch Chevrolet for CR7 Motorsports. This will mark Enfinger’s second start with the team as he has split his usual No. 98 Toyota for ThorSport Racing with Christian Eckes. Eckes is behind the wheel of the No. 98 this weekend.

Jesse Iwuji returns to the No. 33 for Reaume Brothers Racing in his second appearance of the season. The No. 34 is listed as to be announced; it’s expected that CJ McLaughlin will join the team this weekend.

Ross Chastain will make his first appearance since Atlanta Motor Speedway for Niece Motorsports in the No. 44 Circle B Diecast Chevrolet.

Ryan Reed will also make his second start of 2021 after making his season debut at Richmond. Reed will drive the No. 49 CMI Motorsports Chevrolet.

Two-time NASCAR Cup Series champion Kyle Busch will drive the No. 51 Cessna Toyota for Kyle Busch Motorsports. The start is Busch’s fourth of the season.