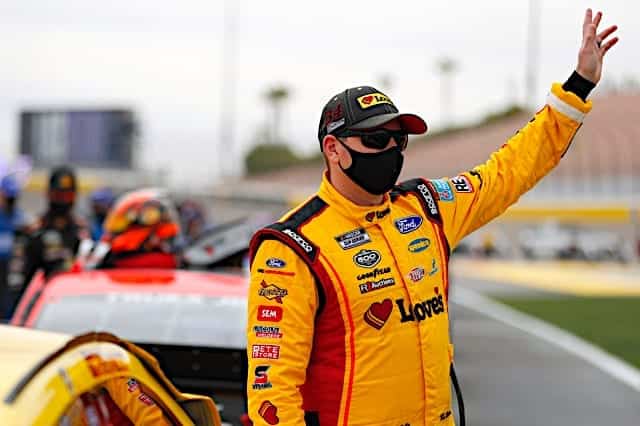 If a 2021 handbook were written on how to survive superspeedway racing, Michael McDowell would likely be the author thus far. February’s Daytona 500 Cinderella victor came just one push away from besting fellow Ford stablemate Brad Keselowski Sunday (April 25) for the win at Talladega Superspeedway.

“It means a lot,” McDowell said of another solid day at this track type. “We had that plan coming into this weekend, to make sure that we ran hard the whole race, try to get stage points, race hard, be up front all the time.

“I feel like we did well today. We scored points in all three stages.”

That he did. McDowell started the race from 23rd but quickly worked his way up to sixth by the lap 25 competition caution. McDowell jockeyed between the top 10 and top 20 in stage one before scoring three stage points in eighth.

The Phoenix, Arizona native maintained a solid running spot in stage two, once again varying between the top 10 and top 20, a typical feature at superspeedways. McDowell flexed his muscles at the end of the stage, putting himself in contention for the stage win before ultimately finishing fourth under yellow.

For a race where chaos sought and found many drivers, McDowell was largely able to avoid any threats. He kept his nose clean and ran at the front of the pack for a good majority of the final stage. In the closing moments of the race, McDowell looked to sneak his way through for a victory, just as he did at Daytona after a late incident forced NASCAR Overtime.

As drivers fought for position in the final two laps, McDowell put his No. 34 Love’s Travel Stops Ford Mustang in the hunt for the win. A push from William Byron got McDowell a run to the back of Keselowski’s No. 2 Ford Mustang. McDowell made a move to the outside, trying to time his run in the tri-oval but came up just short. Had he timed the move a split-second later, McDowell could have possibly used more momentum to propel past Keselowski’s race-winning machine. Ultimately, he rounded out the day in third.

The top-10 result is McDowell’s fourth of 2021, matching his career high from a year ago. He also matched his career high in top-five finishes with his second such result, matching the mark he set in 2019. The result vaulted McDowell, who is currently locked into the playoffs, to 13th in the NASCAR Cup Series point standings.

Kaz Grala has faced a career of uncertainty. Grala has earned solid results in each ride he’s driven for, yet unpredictability about his future always seems to find him. It has been no different in 2021. After Grala thought he had strong backing to obtain a ride for the season, his sponsor left, leaving him in a deep hole.

Fortunately, Kaulig Racing gave him a chance to drive their Cup entry as a part-timer. Grala recently told Frontstretch that he was expected to only compete at superspeedways for the team in 2021. He is seeking to make the most of it and did so in Sunday’s GEICO 500.

Grala held back in stage one to keep his nose clean and learn the handling of his No. 16 Hyperice Chevrolet. He was able to avoid a frightening crash from Joey Logano on the stage’s final lap to finish 24th. Grala found the front pack at times during stage two and once again avoided an accident to complete the stage in 23rd.

The Boston, Massachusetts native pulled his belts tight for the final stage and sought to get in the mix. He was able to mainly stay in the draft and even found the top 15. A late caution spurred an overtime restart with Grala sitting 15th. He wasn’t done there, however, as the young driver worked his way through the draft and chaos to earn Kaulig Racing its best Cup finish in sixth.

“I was just happy to get to pilot this thing,” Grala told FOX Sports following the race. “It is few and far between when I do, but I try to make an impression on my few starts and I feel like today was a good step in the right direction. Didn’t have the best luck in Daytona, but we rebounded here.”

The result earns Grala much needed attention to possibly land a full-time ride in 2022.

As expected, Talladega allowed many dogs to show their teeth with the big dogs. McDowell’s teammate Anthony Alfredo easily earned a career-best finish in 12th driving the No. 38 Speedy Cash Ford. Ryan Preece was in the mix for a large part of the day, running 14th.

Props must also be given to Erik Jones, who was leading on the second-to-last restart with 12 laps remaining. Jones got his No. 43 Chevrolet in the mix before getting turned on the final lap, ruining a likely top-10 finish. Meanwhile, Harrison Burton made his Cup debut and earned a respectable 20th-place showing for Gaunt Brothers Racing. He was in the mix for much more until a shaky restart in NASCAR Overtime.

The NASCAR Xfinity Series also graced the high banks in Alabama for the Ag-Pro 300. Brandon Brown led the way with a strong seventh-place run in a rain-shortened event. Tommy Joe Martins earned a season-best finish in 11th while Jeremy Clements guided his way to a 14th-place result. Finally, Colin Garrett made the most of his season debut for Sam Hunt Racing, coming home in the 15th position.

The Xfinity Series gets a breather this week as the Cup and Camping World Truck series follow the yellow brick road to Kansas Speedway.

Front Row Motorsports landed both of its drivers in the top 20 at the two Kansas races in 2020 with McDowell and John Hunter Nemechek, who was driving the No. 38 Ford back then.

A Tribute to “Chargin'” Charlie

Sad news surfaced on Friday (April 23) that “Chargin'” Charlie Glotzbach had passed away at the age of 82. Glotzbach earned four wins in the Cup Series along with 38 top fives, 50 top 10s and 12 poles in 124 starts. His best points finish was fifth in 1969. That was a very respectable statistic, as Glotzbach never competed in more than 22 races in a season.

Glotzbach landed in a few underdog rides himself but was known as a hard charger who got the most out of his equipment that he could. Our thoughts and prayers go out to his family during this time.

An overall great day for our No. 34 @LovesTravelStop team at @TALLADEGA! We scored points in both stages and were right where we needed to be on the last lap; we just needed a little bit more momentum to grab the checkered flag.

Congrats to @keselowski and the #2 team! pic.twitter.com/zb6ct9JK52

Whoops, thought it was a top-5 for a second… but still A SIXTH PLACE FINISH TODAY @TALLADEGA! So proud of @KauligRacing for bringing a bad fast @Hyperice @TeamChevy. Can’t wait to do it again with you guys soon!@MattKaulig@C_Rice1 pic.twitter.com/jmxLYETWrr

12th!!! So thankful for everyone who supports this team and I. @speedycash @Team_FRM @FordPerformance pic.twitter.com/SctRdECKmk

Crazy experience… Not the finish I thought we deserved but I think this experience will make me better! Pretty rare for me to get emotional but strapping into a cup car today definitely got me! #SomethingToProve https://t.co/AJgI9E30tq

Today’s #AgPro300 has been called short due to rain. @brandonbrown_68 and his No. 68 Chevrolet finish P7!

Thank you to @Larrys_Lemonade for coming on board with us today at @TALLADEGA! pic.twitter.com/ucRMO8wXOp

P11 today. Great bounce back day for us! Timed it right at the end to make our run & dodge the big one. Wanted oneeeeee more lap for that top10. We had some momentum. Hard to be upset tying my 2nd best @XfinityRacing finish. Pumped for the team & @AANAdjusters https://t.co/QxulpFrn53

Mother Nature threw us a curveball. We executed our plan to ride the race out until it was go-time. After sustaining right-side damages in the Dega Big One, the team decided to stay out knowing rain was on the way. Great strategy call lead to a p15 finish at @talladega. pic.twitter.com/07fDmSzQ1u