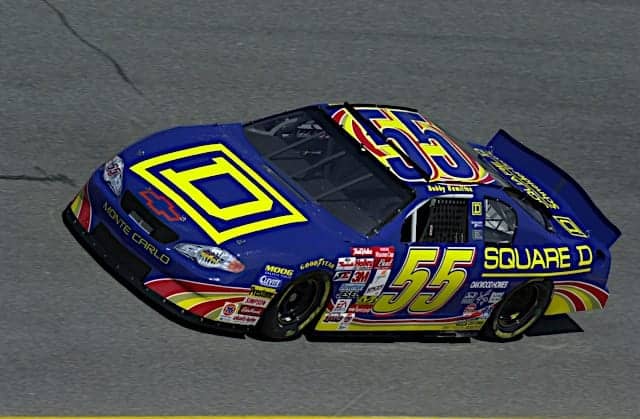 Most weekends when NASCAR comes to town, Talladega Superspeedway is an agent of chaos.  The success, or failure, of many a driver hinges on what happens whenever the Big One breaks out.  Talladega’s races often come down to who can avoid the seemingly inevitable carnage and survive to race for the win in the closing laps.

But 20 years ago, when NASCAR made its annual spring visit to Alabama, there was no big crash, or even a single caution flag.  The fight for the win in the closing laps involved nearly 30 cars, with Bobby Hamilton emerging from the pack to earn the fourth and final win of his Cup Series career.  The 2001 Talladega 500 was an unusual race with a surprise winner, and it was just the type of event that the NASCAR community sorely needed.

It is always difficult to predict what will happen at Talladega, but this particular race came with an extra degree of uncertainty.  The Cup Series was preparing to race at a superspeedway for the first time since the Daytona 500, where a last-lap crash took Dale Earnhardt’s life.  With safety on everyone’s mind, NASCAR dictated that any driver who passed below the new yellow line around the bottom of the racetrack would be penalized.  NASCAR also gave the drivers a stern warning to be on their guard during the race.

Still, nobody really knew what to expect.  Losing its biggest star had shaken the sport to its core.  The sanctioning body would explore new safety initiatives after Earnhardt’s death, but those were still months, and in some cases years, away.  On a sunny, picture perfect day for racing, tension permeated the Talladega garage.

What a relief it was that NASCAR got a safe race at its fastest and most volatile track.  All 43 drivers who started the race walked away.  For just under three hours, NASCAR’s best put on a masterful display of car control amid the typically tough conditions of racing at Talladega.  In fact, 40 drivers were still running at the finish, with 29 on the lead lap.

To race for 500 miles without a single caution flag is not unheard of at Talladega – it happened in 1997 and would happen again in 2002.  But NASCAR’s fans and competitors needed to have a superspeedway race with the current cars and aero package that did not end in tragedy.  A race free of vehicular destruction was important for helping everyone heal.

Not to mention that the race was highly competitive, as well.  The 2001 spring race could have easily played out like the fall 2009 race at Talladega when drivers’ frustrations about NASCAR’s policing of bump drafting caused a lot of single-file racing.  Instead, drivers ran in a tight pack almost all day, showing off the excitement of the wicker bill package.

The lead changed hands 37 times among 26 drivers, and no one led more than 51 laps.  There have been several races at Talladega before, and since, that produced more lead changes, but it was unbelievable how evenly matched the field was all afternoon.  Hamilton did not make the winning pass on Tony Stewart until coming through the tri-oval with the white flag in sight.

It was fitting that Hamilton wound up in victory lane.  He was making his ninth start with Andy Petree Racing, a team that had never won in the Cup Series before.  But Petree, one of Earnhardt’s former crew chiefs, had an ace up his sleeve.  He had begun a partnership with Richard Childress Racing and Dale Earnhardt Inc. in which all three teams would collaborate on their superspeedway setups.  This technical alliance, known as “RAD,” gave APR an excellent opportunity to score its first win.

The previous year, Kenny Wallace ran second to Earnhardt in the fall Talladega race.  The team brought the same car, formally a show car, back for Hamilton.  This time, it won.  After Hamilton came down pit road on his way to victory lane, Petree was so excited that he jumped onto the hood of the No. 55 and slapped the windshield a few times in celebration.

As for Hamilton, the victory was a long time coming.  He replaced Wallace at Petree’s team after three seasons with Morgan-McClure Motorsports.  The pairing of Hamilton and McClure started off fine.  In fact, their 1998 win at Martinsville Speedway wound up being the last for the Abingdon, Va.-based team.  But by 2000, it was clear that Morgan McClure was falling behind.  Hamilton struggled through a miserable season of two top 10s in 34 races, finishing outside the top 20 in points for the first time since 1994.  It was clear that Hamilton needed a change, yet joining APR hardly looked like a guarantee for success.

It did not take long for Hamilton to remind the NASCAR world that he was still capable of winning races when given a fast car.  His drive at Talladega was masterful.  Earlier in the season, Hamilton found that the wicker bill package produced a powerful side draft when two cars were racing side by side.  Scoring a top-10 finish in the Daytona 500 kicked off a strong start to the season for Hamilton and APR.

Late in the race at Talladega, the No. 55 was leading the outside line but was about five car lengths behind Stewart’s No. 20.  So, Hamilton used the side draft to his advantage.  With help from APR teammate Joe Nemechek, he pulled the top line forward, little by little, as the laps ticked away.  Swooping past Stewart as he took the white flag, Hamilton held the rest of the field back for one more circuit.  Behind him, the pack roared across the line in a tight, four-wide cluster, a finish Darrell Waltrip famously dubbed “a scoring nightmare.”  The thrilling finish, and Hamilton’s exhaustion in victory lane, underscored just how tough the race had been.

In a NASCAR career that spanned almost 20 years, Hamilton pulled off some impressive feats.  He took Petty Enterprises back to victory lane after a 13-year drought.  He built his own team in the Camping World Truck Series from the ground up and won a championship in 2004.  Yet Hamilton’s Talladega win often feels like his most enduring NASCAR victory.  It represents the excellence of a gritty, veteran racer who faced years of struggle to run with NASCAR’s best.  It also marks the triumph of Earnhardt’s old friend and crew chief who proved that he could build a winning race team.

But for everyone else, the 2001 Talladega 500 brought relief and positivity to a sport that needed some good news.  The race began with an atmosphere of uncertainty, chaos, and fear.  However, racing skill and cooperation prevailed that afternoon and prevented any more heartache from befalling the NASCAR community.

It was just the race the sport needed, right when they needed it.

Good article. Hamilton was the last of a breed –hard nosed Southern racer. His spirit lives on at Nashville Fairgrounds.