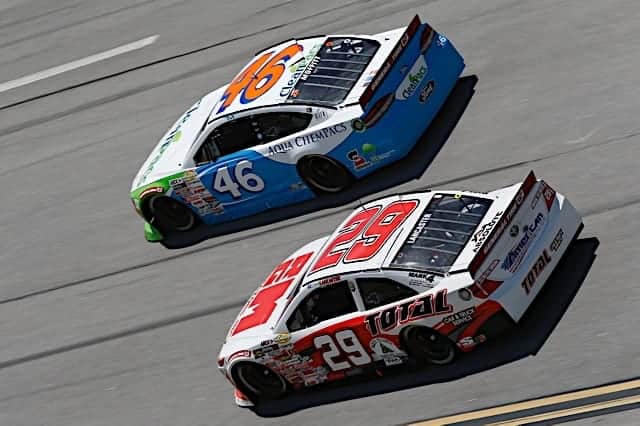 Four days after being involved in a vicious crash on the backstretch of Talladega Superspeedway, ARCA Menards Series driver Derrick Lancaster remains in “critical, but stable” condition according to an update provided by Fox Sports reporter Bob Pockrass. He has been placed on a ventilator and has since then opened his eyes and is aware of his surroundings, according to Lancaster’s wife in her update earlier this evening (April 27).

Update on Derrick Lancaster from his wife, Beth: He’s still in critical, but stable condition, but doctors are decreasing the sedation as they wean him off the ventilator and he’s opening his eyes. pic.twitter.com/fk1XxY8S6J

With five laps to go in Saturday’s General Tire 250, Lancaster was running inside the top five when contact from eventual race winner Corey Heim, following a bump draft from his Venturini Motorsports teammate Drew Dollar, sent the 48-year-old into the outside wall. His No. 29 Toyota erupted into flames before spinning and coming to a rest at the bottom of turn 3.

After safety crew members assisted him out of the still-burning inferno and took him to the nearby University of Alabama burn unit, it was revealed by the Lancaster family that the Virginian suffered second and third degree burns on both of his arms, neck and face.

She also stated Lancaster did not suffer any broken bones or bleeding and will provide updates in the coming days.