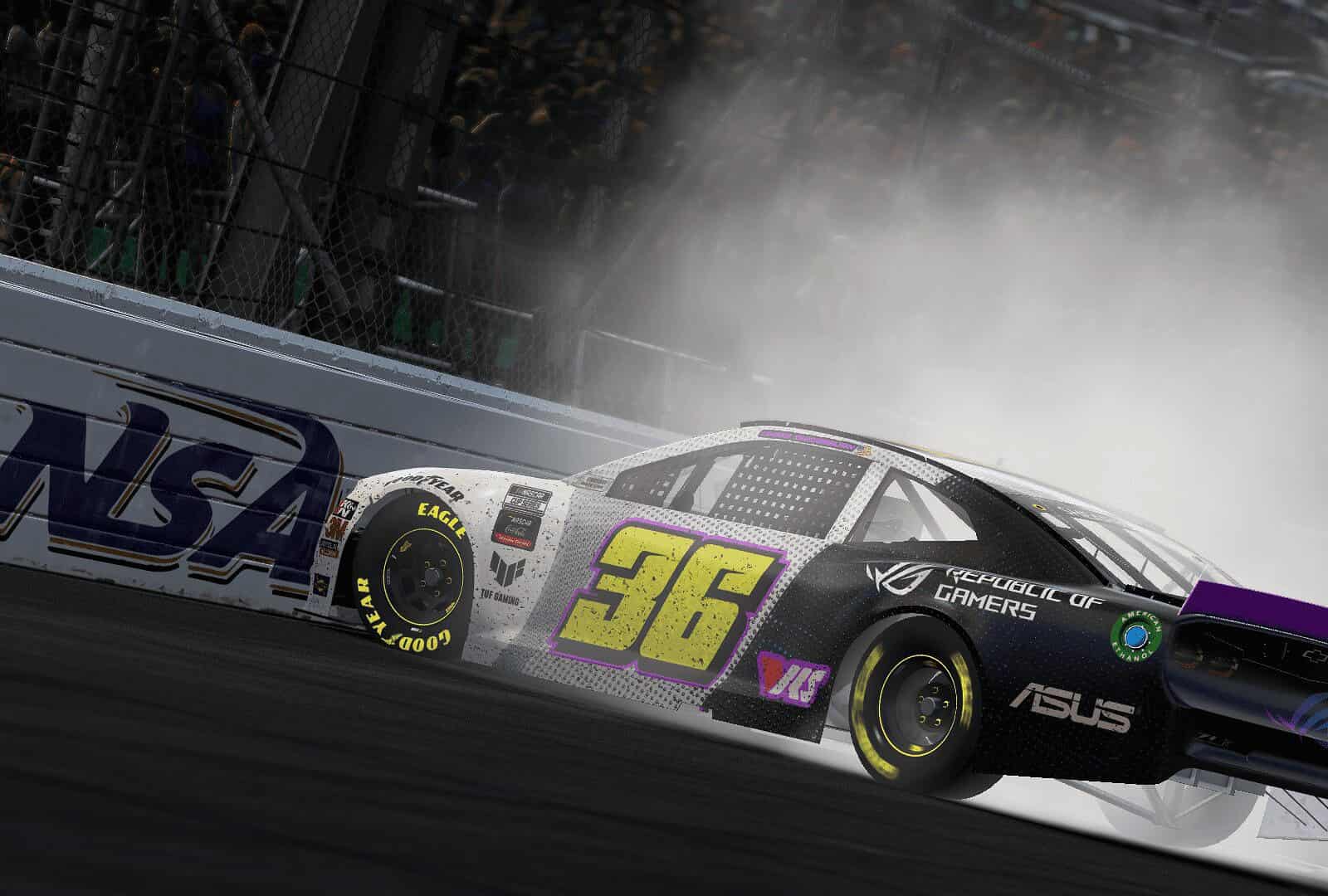 Chris Shearburn scored the victory at virtual Kansas Speedway on April 27 to make it seven different winners in seven races this season in the eNASCAR Coca-Cola iRacing Series.

This marked the first time since 2010 there have been seven winners in seven races.

The win was the second of Shearburn’s career, and he was extremely grateful and excited after the victory.

Points are a big thing this season, with a win locking you into the playoffs. However, with the amount of winners there have been this season, it’s looking like drivers will need to maintain a spot near the top of the point standings to make it in. If there are 11 winners, then this will come into play.

The No. 4 machine of Ryan Luza proved to be fast at the start, as he led the opening stint of this event. Shearburn challenged Luza the first 10 laps, but could not prevail.

An intense side-by-side battle ensued for the next several laps between the two. Shearburn would lead some over Luza but the battle continued until lap 26 when Luza would be clear for the race lead.

Logan Clampitt kicked off the pit stops for the night on lap 30 , attempting to get off-sequence as green-flag racing began to be the theme. This came about 11 laps earlier than expected, when some leaders including Bobby Zalenski, Isaac Gann and many other frontrunners hit pit road for their first stop. Race leader Luza peeled off on lap 43.

Blade Whitt led during the cycle after stretching his fuel run. Fresher tires took over the race lead near the halfway point with Shearburn, and Luza followed suit with Mitchell DeJong in third.

Shearburn dominated the middle portion of the race and proved that he was a true contender for the race win.

The first caution of the race flew with 57 to go after an incident between John Gorlinsky, Dylan Duval and Bob Bryant occurred on the backstretch. This all but eliminated any sort of strategy for the remaining portion of the race, and it was all about pure speed and handling from then on.

The huge one at Kansas took place on the next restart. At least 10-to-12 drivers were involved in the wreck at the front of the field. Several contenders such as Luza, Zalenski, DeJong and many others were collected and had their nights cut short.

As half the field was eliminated with the previous caution, the rest of the field took the green with 47 laps to go. Shearburn escaped the Big One and led the field, looking to put some distance between everyone else and himself.

The opposite proved true, as Gann, Clampitt and Shearburn raced three-wide for the race lead. Gann prevailed and took over the lead with 42 laps to go, but not for long. Shearburn took control with 40 to go and did not look back. Keegan Leahy made a hard charge to second but could not catch the Letarte eSports driver of Shearburn in the end.

Leahy is the current points leader over Clampitt after his solid runner-up effort.

The next race will be in three weeks on May 18 at the virtual Circuit of the Americas, the first road course event of the season. Coverage begins at 9 p.m. ET on eNASCAR.com or Twitch.tv/iRacing.