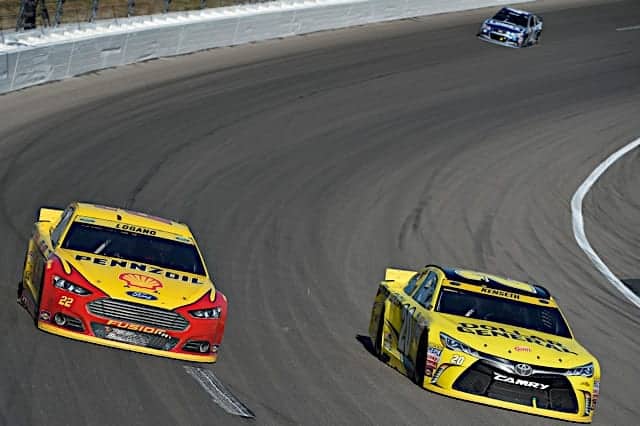 After enduring a wild weekend at Talladega Superspeedway, the NASCAR Cup Series will be heading off to a place that has gained itself a wild reputation in recent years: Kansas Speedway.

Since the speedway’s inception in 2001, it has provided us with many unforgettable moments, from crazy crashes to close finishes and everything in between. It has also hosted the debuts of drivers like Denny Hamlin (2005), Austin Dillon (2011), Ryan Blaney (2014) and Erik Jones (2015) and will be home to Matt Mills‘ debut this coming weekend.

It may have not had the best initial reception among the 1.5-mile speedways to come around in those days. But Kansas has since become one of the more entertaining speedways the series goes to, with razor-thin close racing and finishes that leave fans on the edge of their seats. Here’s five of the most memorable finishes to come from Kansas in its 20-year history.

Spot No. 1 goes to the first playoff race that Kansas held back in 2004, but it was a playoff spoiler getting all the attention at the end.

Joe Nemechek sat on the pole and led the first four laps, but fell back as other drivers took their turns leading the race. But as other contenders encountered trouble during the wreck-filled race, Nemechek stayed in the game and retook control of the lead with 37 laps to go. However, Ricky Rudd, who hadn’t won since June 2002, wasn’t going to let Nemechek get away just yet.

As the laps clicked away, Rudd’s Ford stayed tight onto the rear of Nemechek’s Chevrolet, and the two were side-by-side at the line as the white flag waved. Rudd made one last-ditch effort at Nemechek coming to the checkered flag, but Nemechek prevailed over Rudd by one car length to collect his fourth and final career Cup win and cap a fantastic fight to the finish between two respected veteran drivers.

Not only was this a bizarre race, but it hosted one of the most questionable NASCAR finishes in this millennium. The race was halted twice by rain, which pushed back the finishing time substantially. It was also plagued by notable accidents that took out several playoff contenders in the process.

Greg Biffle led during the race’s final long green flag run, and was trying hard to stretch out his fuel mileage as much as he could. On top of this, darkness was closing in, and Kansas did not have lights at the time. A crash by Juan Pablo Montoya with four laps to go was the last straw for the race, and the pace car brought the field to the checkered flag with Biffle in the lead. However, Biffle’s fuel tank ran dry just a few hundred yards away from the line. Clint Bowyer, Jimmie Johnson and Casey Mears all went by Biffle’s crawling Ford, which he then parked in the grass to celebrate with his team.

Despite criticisms from Bowyer, Johnson and other drivers, NASCAR gave Biffle the win, and it has remained that way ever since. But the debate is far from over among fans as to whether the win should’ve been given to Biffle or not.

The general summary of this race might go down as one of the tamest races in the history of the speedway. But the wild last-lap development between Carl Edwards and Johnson is what keeps this race fresh in our memory banks.

Both cars ran great all day long, with Johnson leading 124 laps in his Chevrolet and Edwards’ 31 circuits in his Ford. In the end, it came down to the two championship contenders for all the glory. On the final lap, Johnson held the gap over Edwards by two car lengths. Going into turn 3, Edwards put a video-game-like move underneath Johnson, sailing ahead of him into the corner. Problem was, he carried so much speed into turn 3 that he went up the racetrack and into the outside wall. As they came toward the finish line, Johnson got back by Edwards and took home his fifth win of the 2008 season.

The two gladiators continued their championship fight all the way to the finale, with Johnson winning his third consecutive championship and Edwards finishing second. But the final lap of the 2008 Camping World RV 400 was a significant moment in this journey that won’t soon be forgotten.

In the 2015 playoffs, the finish of the Hollywood Casino 400 was the first omen of dark things to come for the two star drivers.

Matt Kenseth had the car to beat for most of the event, leading a race-high 153 laps. But as the final handful of laps arrived, Joey Logano began to close in on Kenseth’s Toyota. With four laps to go, Logano got into the rear bumper of Kenseth going into turn 1, sending Kenseth for a spin and forcing an overtime finish. Logano then held off Hamlin and Johnson to take his second straight victory.

This event was the catalyst for Kenseth’s and Logano’s infamous feud that ended with a bang at Martinsville Speedway two weeks later. Kenseth, tolling around in a lapped, damaged car, intentionally wrecked Logano and was suspended for two races, while Logano’s playoff hopes were essentially derailed. Everything stemmed from a battle for the win gone wrong on a sunny afternoon in Kansas.

A race that included even more playoff drama and more playoff twists, the finish to the 2019 Hollywood Casino 400 was a pivotal one in both good and bad ways for several drivers.

Hamlin had the field under control for most of the race, leading a race-high 153 laps, including the final 51. But all the action occurred behind him, as Logano, Chase Elliott and Brad Keselowski were mere points away from the cutoff line. Elliott moved up the most out of the three, moving up into third with six laps to go. But a crash between Bubba Wallace and Matt Tifft brought out the caution, forcing an overtime finish.

During the first overtime attempt, Logano got swept up in a crash with Daniel Hemric and Daniel Suarez, although he suffered no damage. A second and final overtime attempt was held, with Elliott marching up to second and Keselowski bouncing off the outside wall. Hamlin got the win, while Elliott and Logano advanced their way into the next round of the playoffs. A disappointed Keselowski missed out on the rest of the postseason after finishing 19th. The 400-mile event proved to be a tale of both triumph and disaster for drivers contesting in the playoffs, where action always resides.