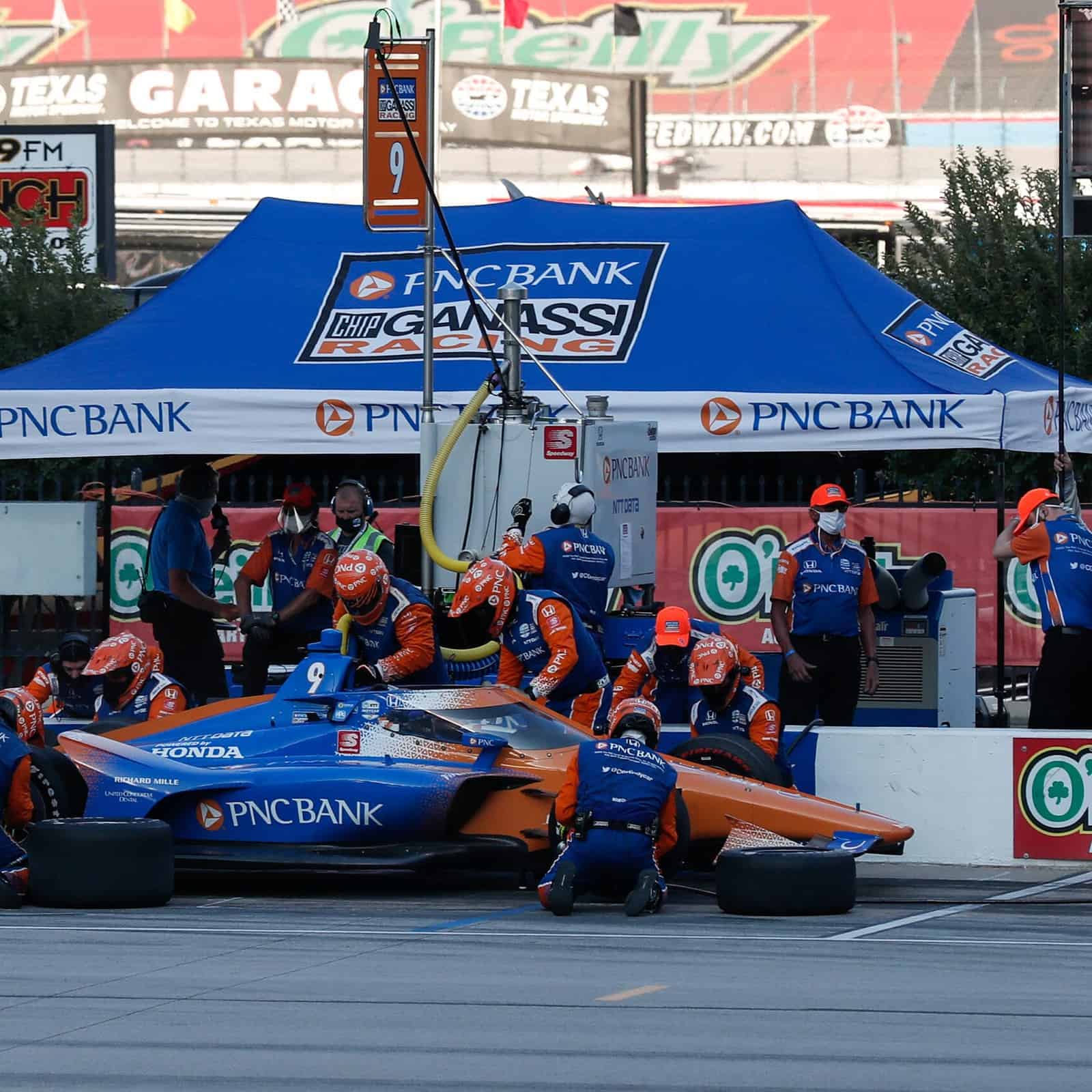 The NTT IndyCar Series’s first oval visit of the 2021 season is a doubleheader at Texas Motor Speedway (TMS) with the Genesys 300 on Saturday (May 1) and the XPEL 375 on Sunday (May 2). This is the first doubleheader Texas has hosted since the twin races in 2011 and since then, a lot has changed at the 1.44-mile oval.

TMS re-profiled the first two turns of the track by flattening the banking from 24 degrees to 20 degrees and widening the racing surface from 60 feet to 80 feet. The changes made the track asymmetrical, as turns 3-4 are still banked at 24 degrees and remain 60 feet wide.

This provides an interesting challenge to race engineers as the car doesn’t ride the same on the track from one set of corners to the other, which makes Michael Cannon’s job as Scott Dixon’s race engineer all the more challenging despite Dixon winning last year at TMS.

“The difference in the banking and also the difference in the radius of the corners does make an appreciable difference,” Cannon said Monday. “These cars are very ride height sensitive in that we rely on the underside of the car to make downforce for us, so it’s [all about] trying to optimize the under tray for those two different radiuses and two different bankings, and the tighter the radius, the steeper the banking, the more the car wants to compress, so it’s doing a good job of respecting that.

“The other issue that we run into there is the changing air density, the changing pace of the tire wear as you get into traffic, it’s very very challenging trying to run 210-215 miles per hour consistently with all these changing factors.”

Teams and drivers will have only one 75-minute practice session to get the cars dialed in as part of the two-day race weekend. On top of that, Saturday’s event is an impound race where the teams cannot change the cars after qualifying, adding to the stresses that Cannon feels going to the track.

“It’s totally stressful, your heart’s in your mouth from the word go because it’s happened before, you go out to pit lane and the car won’t start, there’s some electrical fault or some drama and you’re like, ‘Ohhhh dear, now we’ve got a really big problem,’” Cannon said. “Then yeah, you’ve got to step through, hopefully the car goes in the direction you think it’s going to go and the changes you’ve scheduled work out.

“It’s really challenging to get a baseline on some full tank running, and a qualifying sim, assess where your tire wear is, assess where your ride heights are going to be when the air starts to cool down, what tire pressures you should be starting qualifying with, what tire pressures you should starting the race with, what gear ratios should you be running for traffic and when you’re by yourself, there’s an awful lot of bases to cover so it does make it very nerve-wracking and a very compact session.”

After working with many drivers including Patrick Carpentier, AJ Allmendinger, Ed Carpenter, E.J. Viso and Santino Ferrucci, Cannon finally won his first IndyCar championship with Dixon in 2020 after joining Chip Ganassi Racing during the offseason between 2019 and 2020.

Dixon won the first three races of 2020, starting with the Genesys 300 at TMS. Leading 157 of 200 laps, the No. 9 PNC Bank Honda won the first IndyCar race in the aeroscreen era pretty handily after starting second.

See also
What Mattered for IndyCar at St. Petersburg

The aeroscreen provided its own challenges to Cannon and the rest of the IndyCar engineers. Adding just over 45 pounds on the top of a car that weighed just under 1,600 pounds without driver or fuel massively changes the weight distribution and center of gravity, causing engineers to adjust their setups accordingly. 2021 doesn’t have any major rules changes to external components, so setups shouldn’t have as many changes this year compared to last year.

“We were fortunate, it seems like we hit the [setup] pretty well, I don’t see any reason why it won’t carry over [to 2021],” Cannon said. “There’s a little bit different treatment to the aerodynamics on the car, Firestone has continued to improve their tire and they’ll come back with a new tire so we can adjust around those, but we have enough data [from] the data acquisition in these cars, we have enough data from the manufacturers, from Firestone, we sort of know roughly what to expect so you try to prepare accordingly.”

A doubleheader weekend isn’t a new concept to IndyCar racing, but for ovals it’s a bit of a rarity. WorldWide Technology Raceway at Gateway and Iowa Speedway both had doubleheaders last year as a result of the ongoing pandemic as INDYCAR had to limit its travel. Before that, Texas hosted the last oval doubleheader in 2011 when the field qualified for the first race in the afternoon and a random draw determined the grid for the second race later that same evening.

However, Sunday’s race will not be an impound race, allowing teams to change their cars up in response to driver feedback following Saturday’s race.

“I think the thing you’ll probably see is the field a little bit more separated in the first race than the second,” Cannon said. “The quality of entrant and driver is such now, if you think back to last year at St. Louis come the second race, I mean, everybody’s pretty much on the exact same page, so once we’ve got the first race under our belt, you’ll find the gap to the teams get narrowed even further.”

A large factor in determining the best setup at TMS is tire degradation. Average lap speeds fall dramatically from the start of a run to the end of a tire’s life cycle and being able to curtail that drop off, even slightly, can net a driver many seconds of time over the course of a long green flag run.

“If you can baby the tires, and that is one of the things that we try and work on, […] if you can keep the tires under you for a couple more laps than your competitors, then you’re going to come out ahead,” Cannon said.

Ahead of last year’s race at TMS, the biggest technical worry was how the track would grip in for the Indy cars. A layer of PJ1 traction compound stained the top groove of the track even after being scraped off, and drivers went to the high line at their own peril. In fact, Takuma Sato crashed in qualifying and was unable to start the race because of the damage his car sustained.

The PJ1 compound works when it’s heated up by cars running over it, but when it’s cold, the compound causes the track surface to lose between 15 to 20 percent of grip it offers, and it appears the compound still affects the surface.

“You can’t overcome the physics of the thing, I mean if the surface grip is down 15-20 percent, there’s nothing you can do, you’ve got to go where the grip is,” Cannon said. “It works for the NASCAR cars because they have a tendency to try and minimize tire degradation and will sort of creep up to that PJ1 and start heating it up, and next thing you know they’re all up there. The stuff works well when it’s heated up. Our cars are just so fast, as soon as you touch it, they just take off.”

There appears to be no solution to fixing the problem caused by the PJ1 remnants. If the track remains stained, the heat from the Texas sun will not allow cars to run up there during normal race conditions. However, if drivers are forced by INDYCAR to practice at reduced speeds over the high side of the race track, possibly activating the compound, that could alleviate the problems. The moment a car wrecks from that decision would prompt some pretty angry reactions to why this action was taken in the first place.

“I really don’t know what the answer is until we do it,” Cannon said.

Hope JJ does well. Or he might be scared spitless by the speed difference to stock cars. Still, hope he does well.