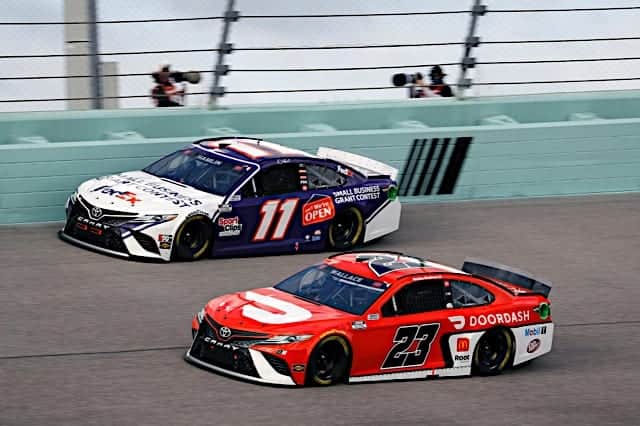 Ah, yes. The COVID-19 vaccine is available and NASCAR has found itself at the forefront of the discussion. This week, NASCAR President Steve Phelps stated that requiring drivers to get a vaccine would be a “slippery slope.”

Those words raised a lot of eyebrows around social media and the NASCAR world. He also said that NASCAR is not considering mandating drivers to get vaccines.

No sport has been more proactive during the COVID-19 pandemic than NASCAR. Last season, when many leagues were playing a modified or shortened season, NASCAR got its full season in on time. It was an incredible effort by everyone involved and NASCAR was praised by many for how it handled their way through the pandemic.

That is what made Phelps’ comments all the more surprising. That led us to wonder: Should NASCAR mandate that its drivers get the COVID-19 vaccine? Brad Harrison and Joy Tomlinson debate.

Bubba Wallace, Austin Cindric,  Jeb Burton and Denny Hamlin are in elite company, and it has nothing to do with their on-track performance.

It is a select group, however, that should not be so elite.

So far, they are among the drivers in NASCAR’s top three divisions to have publicly stated that they are in some stage of the vaccination process against COVID-19. Wallace has taken things a step further, partnering with Novant Health to encourage others to do the same.

Wallace is doing what others drivers should be doing, taking advantage of their bully pulpits to encourage others to vaccinate themselves against COVID-19.

It’s a position that Wallace, Hamlin, Burton and Cindric should not have to be in, as well as all of the employees at 23XI Racing, who publicly received the vaccine as well.

“I am trying to be a leader and get others vaccinated,” @BubbaWallace told CNN today at the 23XI Racing shop, where the NASCAR driver and his team members got their vaccines– while trying to address vaccine hesitancy.

Unlike NASCAR, IndyCar has taken a stronger stance. In May, either a completed vaccination or daily negative COVID test will be required, a key part in the fact that IMS will be able to host upwards of 135,000 fans for the Greatest Spectacle in Racing.

Sports are bringing a return of normalcy, and that includes NASCAR. Encouraging all on-site within the industry to receive a COVID-19 vaccine will take things more towards that plane. Any sport returning, especially one that wants to attract fans across multiple spectrums, needs to make it clear that it places the safety of all in the arena at a high priority. Further protecting drivers, team members and others goes a long way in that direction as well as preventing the possible embarrassment of a return to action being put on hold because of a COVID-19 outbreak … something any sport can ill afford.

Fans being present, even if limited, has been emotionally healing after all that we as a society have endured over the past year, but nothing beats a packed grandstand and vibrant midway before a race.

For that reason, NASCAR and its drivers need to set the example here and now and mandate every driver and team member receive a COVID-19 vaccine.

It’s high time for NASCAR to use that same mindset when it comes to COVID-19 vaccines. –Brad Harrison

No, Give Drivers a Choice

NASCAR should not require drivers to receive the COVID-19 vaccine.

There was no mandatory testing for the virus, so why should there be mandatory vaccinations? Instead of requiring it, NASCAR should encourage them to get vaccinated and provide educational materials or email notices about each type of vaccine. NASCAR, along with the National Football League and Major League Baseball, already partnered with the Ad Council and COVID Collaborative a month ago to encourage people to get inoculated.

Additionally, the sanctioning body could host vaccination clinics on a race weekend so drivers could receive it if they’d like to. Of course, vaccines can have side effects so it would probably be best if the clinic was open during the middle of the week before or after an event, to allow drivers and to recover from both the race and the vaccine. Fans who wish to get the shot could also attend the clinic. Various race tracks have already held vaccination clinics, including Pocono Raceway and Texas Motor Speedway.

According to the Centers for Disease Control and Prevention, over half of Americans 18 years of age and older have received at least one shot- roughly 140.8 million people. It’s so widely available now that the United States is set to give 60 million doses of the AstraZeneca vaccine with other countries. Anyone at least 16 years old can get vaccinated, so why don’t we see more NASCAR drivers get it?

Well, some drivers like Austin Dillon may still have COVID-19 antibodies in their system. But there may actually be more who received at least one shot who choose to not publicize it. NASCAR President Steve Phelps said “the number of people who are in this garage that have been vaccinated continues to steadily rise,” so there’s probably more drivers out there who haven’t revealed they got the shot. Yes, NASCAR drivers are public figures but they still have private lives, including their medical history. They don’t have to share that they received the vaccine, though their fans might like to know.

Before the COVID-19 pandemic many people weren’t required to get the flu shot if they did not wish to, but some colleges in the U.S. now require flu immunizations. While I know COVID-19 is far worse than the flu, I do not believe drivers should be mandated to get it. Some racers may be allergic to the ingredients, too.

I received my first dose of the Pfizer vaccine and believe others should too, but they should have the right to choose for themselves. – Joy Tomlinson

Weird how “my body, my choice” is only relevant when it has mass media political relevance. To push an agenda.

I think it should be up to the individual but, once there are no barriers to getting the vaccine (i.e., supply greater than demand), the mask mandates should be lifted everywhere. Those who didn’t get vaccinated can either continue wearing the mask or take their chances. Those of us who got the vaccine shouldn’t have to worry about those who chose not to. Sooner or later they will be weeded out… they will either get sick and recuperate creating their own resistance or die. It’s their decision.

like that analysis. i work with bunch that won’t get vaccine, won’t wear mask. i am good to go with vaccine and wear mask when i’m around these people or in crowd.

bubba and denny made a big deal about getting vaccinated. maybe the more drivers that are vaccinated, then some racing weekend activities can return, like hospitality and fans on pit road. with all the travelling that these people do, would make sense to vaccinate.

Nancy Opeka
Reply to  Bill B

I only wish the drivers would do the right thing – get the vaccine and make it public like Bubba Wallace did. Or actually voice their reasons for not getting vaccinated so we can see exactly how false information has affected them. Apparently, the majority of NASCAR drivers are either followers of false information and conspiracy theories or too frightened of their fan bases turning on them. In this environment, it would be more courageous to be a leader than to be a mute coward.

A really interesting comment.
Apparently, the majority of NASCAR drivers are either followers of false information and conspiracy theories or too frightened of their fan bases turning on them.
Think I would be more interested in my own, as well as my families, safety than worrying about the opinion of some people who I had never met nor am likely to.
Wonder whether some have gotten vaccinated but are just keeping it quiet.

Why are the drivers obliged to be public safety spokesmen? Maybe they got their shot and they feel it’s their business. If the current environment has taught us anything, it’s that it’s better for those beholden to Corporate America to keep their mouths shut than risk pissing off some sub-group and dealing with the controversy. I would wager that many more drivers have gotten their vaccination than we know.

Nancy Opeka
Reply to  Bill B

That’s ridiculous! First of all, according to HHIPA laws, our medical details belong to us; we aren’t required to give that information publicly.
Secondly, why do their reasons for declining it have to be due to conspiracy theories, followers of false information or cowards? I am 70 years old and I don’t want the vaccine. Why? Because I don’t think I need it and I just don’t want it. And that’s all the reason that I or anyone else needs.

Also, it is NOT true that NASCAR has been more “proactive” during the pandemic. There is no mandatory testing, so there are almost certainly drivers who tested positive in secret or failed to get tested after exposure at all. That shows a complete disregard for transparency and public health,