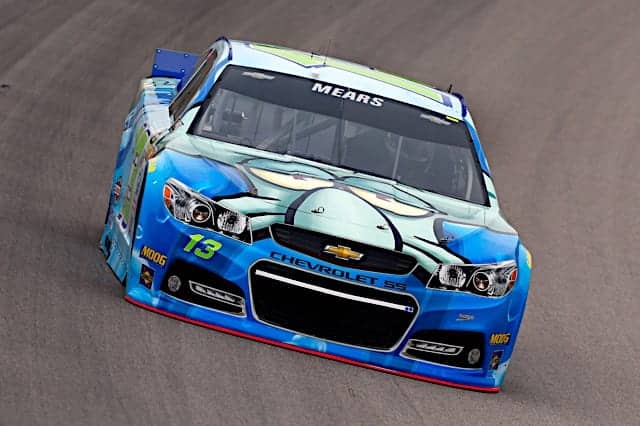 If you are a sponsor who really wants to get some exposure, NASCAR provides the perfect stage to elicit some creativity. From celebrity advertisements to Hollywood glitz and even the luscious locks of Corey LaJoie, marketing dollars have certainly used in some pretty innovative ways throughout the sport.

This weekend’s Buschy McBusch Race 400 is the next iteration in this wacky trend.

Yes. You heard that right.

Busch Beer, one of NASCAR’s premier partners, has let a fan pick the name of the NASCAR Cup Series race at Kansas Speedway this Sunday (May 2).

While one struggles to comprehend what a Buschy McBusch is, the marketing draw for Busch has been successful. Sometimes, the more wild and wacky a sponsorship is, the more attention it gets. This tactic has worked in the past. Here are some of the more zany race sponsorships that NASCAR has seen.

Yes. These are real!

Kansas Speedway has been no stranger to some other bizarre sponsorship. The square yellow animated sponge graced the cover of the spring Cup race at Kansas in 2015.

Nickelodeon used the ploy to advertise their popular TV show. As a part of the sponsorship, several cars in the field were adorned with several SpongeBob characters.

SpongeBob, Patrick, Squidward, Gary and the rest of the crew down at Bikini Bottom enjoyed their stay in NASCAR. David Ragan was so impressed that he decided to spin out and say hello to the gang.

Jimmie Johnson won the race and got to meet SpongeBob in victory lane.

Nickelodeon extended their sponsorship the next season but elected to promote the Teenage Mutant Ninja Turtles show. However, they moved their sponsorship to the Cup race at Chicagoland Speedway in 2016. Instead of destroying the shredder, Michaelangelo, Raphael, Donatello, and Leonardo graced the Illinois facility.

Like the race in 2015, many cars were covered in ninja turtle-themed paint schemes. Martin Truex Jr. scored the win for Front Row Motorsports. Truex likely became the only driver in NASCAR history to get slimed in victory lane.

This is what happens when the Teenage Mutant Ninja Turtles sponsor a NASCAR race.

Congrats to Martin Truex Jr. on his win in Chicago! pic.twitter.com/OgfOMbty3b

Jeff Foxworthy once said that “you might be a redneck if you think the last four words of the national anthem are gentlemen, start your engines.”

There might not be anything better than Foxworthy and NASCAR. The popular comedian and noted NASCAR fan brought his brand of grit chips to the sport in 2012 to sponsor a NASCAR Camping World Truck Series race at Atlanta Motor Speedway.

Among the drivers in the field were Kyle Busch, Aric Almirola, Kyle Larson, and eventual race winner Ty Dillon. While it was Foxworthy’s lone foray into sponsorship, Foxworthy has been a public figure at tracks across the south and even performed his famous comedy routine before the Atlanta Cup race earlier this season.

Between 2014 and 2017, the VisitMyrtleBeach.com 300 was a mainstay on the NASCAR Xfinity Series schedule. Why is this so obscure?

Myrtle Beach, South Carolina is one of the most popular vacation spots along the Atlantic coast. World-class beaches, golf courses, and restaurants await!

The problem? The VisitMyrtleBeach.com 300 was held at Kentucky Speedway, over 600 miles away from Myrtle Beach.

At every race track around the country, you are likely to find some amazing tailgating on the premise. The smells of beef on the grill waft across the facilities, fusing with the smells of burnt rubber and Sunoco gasoline. The wild concoction is what NASCAR fans have come to know and love.

The Federation of State Beef Councils bought naming rights to the season opener for the Xfinity Series at Daytona International Speedway. Despite the mouth-watering name, there was some serious business that went down on track.

Two large crashes eliminated a good chunk of the field. Justin Haley, Brett Moffitt, Austin Cindric and Harrison Burton had a frenzied battle to the finish line, but it was Cindric who took home all the marbles.

Nothing like a beef dinner after a win at @DAYTONA! ??#NASCAR | @Verizon 5G pic.twitter.com/kO2eHSpR5f