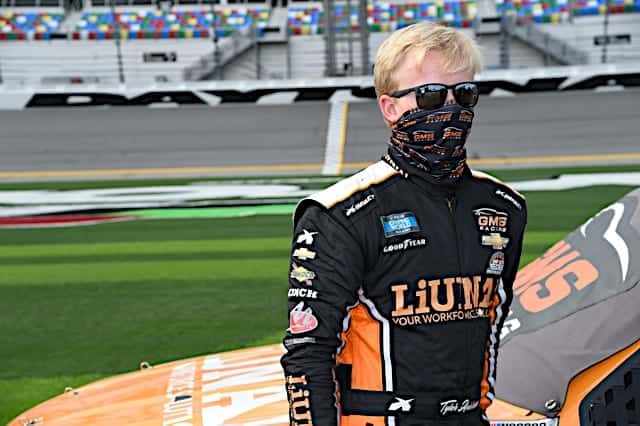 Tyler Ankrum Looking to Back Up Strong Richmond Run

But two weeks ago at Richmond Raceway, Ankrum finally walked away with a finish that should boost the morale of the No. 26 team and help put it in the right mindset to keep that forward momentum going this weekend at Kansas Speedway. For a driver currently nearly 60 points outside the playoff cut line, another solid run is crucial in keeping his playoff hopes alive, especially with the unknowns coming up over the next five races (Darlington Raceway, Circuit of the Americas, Nashville Superspeedway).

“I’m excited to get back to Kansas. I love Kansas as the speedway itself and I’ve always had a blast there, but just not the best of luck,” Ankrum explained. “We’ve always had speed and great performance, but we just need to get this monkey off our back. After a great run at Richmond the team has great morale heading into this weekend and we’re just ready to really go back out there and crush it.”

On paper, Kansas doesn’t look like a track that’s been very kind to Ankrum either. He posted a best finish of 11th while running for David Gilliland Racing in 2019, which is more than respectable for a rookie. But 2020 wasn’t at all kind with results of 33rd, 28th and 34th. As the Truck Series rapidly approaches the halfway point of the regular season, look for a bit of risk-taking for the No. 26 team as it attempts to find its way to another strong top-10 run or better.

It’s already been two-and-a-half months since Cory Roper nearly snagged the victory in the Truck Series season opener at Daytona International Speedway. And while he faced DNFs at the Daytona road course and Las Vegas Motor Speedway in back-to-back races, Roper told Frontstretch earlier this season he remains committed to running the full season now that “ everything in that shop is 100% paid for.”

And while there are plenty of puzzle pieces that need to fall into place to ensure the funding remained for the small family-owned team out of Texas, it’s taking another step in that journey this weekend at Kansas by putting Chase Briscoe behind the wheel. He previously drove the No. 04 Ford to a fifth-place finish at the Bristol Motor Speedway dirt track, and after a successful outing there, Briscoe returns to help the team with feedback for its mile-and-a-half program, which makes up nearly one third of the current Truck Series schedule.

“I’m excited to get back with the Roper guys,” Briscoe said. “We had a great run on the dirt and I’m excited to see where their stuff is on the pavement side and help them try to evaluate where they stack up. I’m honored that they asked me to do it as I had a blast racing with them at Bristol and I’m sure it will be the same at Kansas.”

Though Briscoe’s last outing on a mile-and-a-half track came as a victory in 2017 with the now-defunct Brad Keselowski Racing, I wouldn’t expect him to take the truck to the front of the field immediately, especially without practice or qualifying in place. But what’s more important are the long-term gains Roper Racing can make based on the information Briscoe is able to share.

Despite the constant preaching by fans that claim any race Kyle Busch runs in the Truck Series is an automatic win, that’s simply not the case this season. In fact, he’s finished runner-up to John Hunter Nemechek twice in three races and has just a single win this year.

Most recently, it was Nemechek who took the checkered flag with a dominant victory at Richmond two weeks ago. The win also marked Kyle Busch Motorsports’ fourth straight trophy with Martin Truex Jr. winning the Bristol dirt race.

The back and forth streak between the two began in Las Vegas when Nemechek led 94 laps en route to his first win this season, and Busch matched that two weeks later in Atlanta by leading 102 circuits. Then, it was Nemechek with 114 laps led en route to the win at Richmond.

Which of these two drivers will actually have the edge this weekend remains to be seen. Busch does have the advantage of being the only driver with multiple wins at Kansas (2014 and 2017), but Nemechek’s two most recent starts ended in third and fourth, respectively, while driving for his family-owned NEMCO Motorsports. Nemechek will also lead the field to the green flag this weekend, so he already has the track position advantage built in.

Both drivers have immense talent and it’s ultimately going to come down to which can outsmart the other on the track. And if they’re pretty evenly matched? It’ll be a battle of wits between crew chiefs Eric Phillips and Mardy Lindley.

Can Toyota Be Stopped?

It’s no secret Toyota has excelled this season, taking all six victories through the first six races on the schedule. It’s just the fourth time in series history a manufacturer has opened the season with six or more wins, and it’s the second time Toyota has done it. In fact, Toyota holds the record for most victories to open a Truck Series season at 10 in 2014.

In fact, last week I wrote about the manufacturer’s dominance and found that Toyota drivers have led a whopping 85% of all laps run this year. But the question remains whether a Chevrolet or Ford driver can break up Toyota’s party. After all, seven of the last 10 races at Kansas have been won by Toyotas, dating all the way back to 2013.

Given that the lineup is set using a matrix based on the previous race, it’s no surprise to see that Toyota drivers make up seven of the top 10 starting positions, including sweeping the top five. Nemechek will lead the field to the green alongside Busch, followed by ThorSport Racing teammates Ben Rhodes and Johnny Sauter. Chandler Smith will start fifth, while Todd Gilliland breaks up the Toyota party by starting sixth. Austin Hill is set to start eighth, followed by GMS Racing teammates Sheldon Creed and Zane Smith. Stewart Friesen rounds out the top 10 starters.

At this point I have a hard time betting against the powerhouses that KBM and ThorSport have built, and there’s a high probability that one of those two organizations will find their way to victory lane Saturday. But I wouldn’t count out GMS because, even though the same kind of dominance it had last season isn’t quite there, it’s clear the organization is starting to find its footing. And we all know that one win tends to shake off nearly any problems at the end of the day.