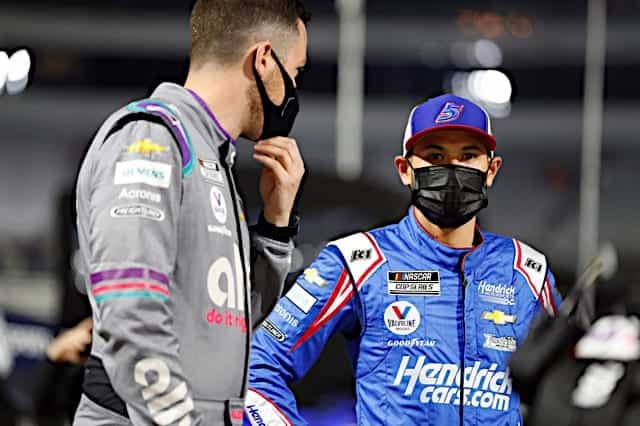 NASCAR Cup Series teams make their way to the Sunflower State this weekend for some 1.5-mile action at Kansas Speedway. Let’s get your daily fantasy NASCAR DraftKings rosters ready for the Buschy McBusch Race 400, airing Sunday, May 2 at 3 p.m. ET.

After taking on the high banks of Talladega Superspeedway, drivers head to a smaller racetrack, but one that’s also capable of producing violent wrecks. One of the more notable crashes involved Joey Logano, Danica Patrick and Aric Almirola in 2017, causing Almirola to sit out of competition for several months due to injury. Even with a lower horsepower package the past couple of years, cars can still suffer severe damage from vicious hits. In 2020, Ryan Preece got involved in a savage incident when his car hit the inside wall hard at nearly full speed. Thankfully, Preece wasn’t hurt in the crash, though he was deeply frustrated.

So what does this trend have to do with DraftKings? Well, if a lot of cars crash out of the race, there could be quite a few drivers who exceed their daily fantasy value. Also, Talladega left some strong cars in the back, affecting their starting positions for Kansas. In turn, DraftKings gave many of these drivers a higher salary, as the site often does when a competitor capable of running up front starts in the back. These include Kyle Larson and Logano, both of which could justify their value if they get a top 10.

It leads to some unconventional strategy for a cookie-cutter intermediate oval. In the end, it’s up to you to choose whether you want these stars paired with scrubs, lower-priced drivers who could have a decent score, or a more balanced lineup featuring mostly mid-range drivers.

Before I share my picks for Kansas, I’ll go over what happened at Talladega.

Denny Hamlin’s top-five streak at superspeedways was broken on Sunday (April 25), as he crashed near the end of stage two and never recovered. Still, this lineup had winner Brad Keselowski as well as good value plays Ryan Preece and Kaz Grala.

This roster earned $1.50 in the $1 Happy Hour tournament and won the big $1 single-entry double up.

But Larson missed most of last year after he uttered a racial slur during an iRacing event. He was reinstated at the beginning of this year and joined Hendrick Motorsports after Jimmie Johnson retired from NASCAR.

So far, it’s worked out pretty well as Larson’s been stellar on the 1.5-mile courses. He wheeled the No. 5 car to a fourth place at Homestead-Miami Speedway and followed that up with a win at Las Vegas Motor Speedway. Larson also nearly claimed his second victory at Atlanta Motor Speedway, leading a whopping 269 laps before Ryan Blaney snuck past him. Still, his dominating performance boosted his DraftKings score to 160.1 points.

Although Larson’s had a couple of negative fantasy scores since then, he’s starting from the back and should have a high score if the No. 5 car doesn’t retire early.

All of Bowman’s top fives and top 10s came within the past seven Kansas events. In the spring 2019 race, he led 63 laps en route to a runner-up performance. Last year, Bowman ended eighth in July and third in the fall playoff race; he’s really done well there since he joined Hendrick in 2016.

The No. 48 driver has also had some good runs this year, especially two weeks ago at Richmond Raceway. Bowman passed Hamlin after a late restart to win his first race of the year, scoring 82.7 DraftKings points as a result. Additionally, Bowman took home third at Atlanta, totaling 58.3 fantasy points by the end of the race. He also earned a ninth at Homestead, showing just how fast his car is so far on the cookie-cutter racetracks.

Bowman will line up 25th, giving him the chance to rack up position differential points on DraftKings if he earns another top five or 10.

Sensing a theme here? Yes, Hendrick’s brought some fast cars to the 1.5-milers. Byron’s on an eight-race top-10 streak that started with a win at Homestead. He led 102 laps and notched 33 fastest laps, increasing his DraftKings total to 115.4 points. Since then, Byron’s steadily scored between 36 and 51 DraftKings points, while his salary has ranged from $7,000-$9,000. Though Byron’s starting second this weekend, he should be worth that $8,800 price if he has the same speed from earlier this season.

The No. 24 pilot has also done well at Kansas, posting three consecutive top-10 finishes, including a fifth in fall 2019. Byron also led 27 laps last July before crossing the line in 10th.

All of the Hendrick Chevrolets have had good results recently at Kansas, and Byron should be no exception this Sunday.

Cindric is once again in my lineup due to his 38th starting position and lower salary. I was surprised to see this bargain price, as DraftKings tagged him at $8,600 for his previous two races at Atlanta Motor Speedway and Richmond Raceway. Cindric ended those events 22nd and 28th, respectively, scoring 37.5 and 24.9 fantasy points in each race. The No. 33 car still has the potential to get a score similar to those, which isn’t terrible for a sub-$7,000 driver.

However, his Xfinity Series career at Kansas has not been very good except for last July. Cindric flat-out dominated in the No. 22 Team Penske car, leading 131 out of 175 laps en route to a runner-up performance. It’s highly unlikely he’ll duplicate that this week but a top-15 result would be plenty good enough for your roster.

Chastain’s experience at Kansas is with what used to be Premium Motorsports, so you can’t properly gauge how he might do based off those races. But he did finish fifth last July and 10th in fall 2019 in Xfinity, notching 23 fastest laps that summer.

This year, Chastain wheeled his No. 42 Chip Ganassi Racing Chevrolet to a seventh-place finish in the Daytona 500 and six additional top 20s, earning between 27 and 67.2 DraftKings points in those races. Three of his past four events scored over 30 fantasy points, while his 17th-place run in the Dixie Vodka 400 at Homestead bumped him up to 41. If Chastain can gain six or more positions this weekend, he’ll once again have over 30 fantasy points on DraftKings.

Buescher started out 2021 as the little driver that could, leading 57 laps at Homestead in March before fading to a 19th-place finish. Like Chastain, Buescher has one top 10 on the year (a seventh at Atlanta) and six additional top 20s. Unfortunately, his past couple of races have ended in the 20s, resulting in low DraftKings scores. Still, he’s had good results on the 1.5-mile tracks and hopes to have another good run at Kansas on Sunday.

Though last year’s events at Kansas didn’t go so well for the No. 17 Roush Fenway Racing driver, he did earn three consecutive top 20s in races prior to 2020. One of those was a 10th place in 2019 in which Buescher led 10 laps — not bad for his former JTG Daugherty Racing team.

Buescher begins 16th Sunday, so he won’t be able to score as many position differential points. He might still get a top 10, though, if he can stay out of trouble.