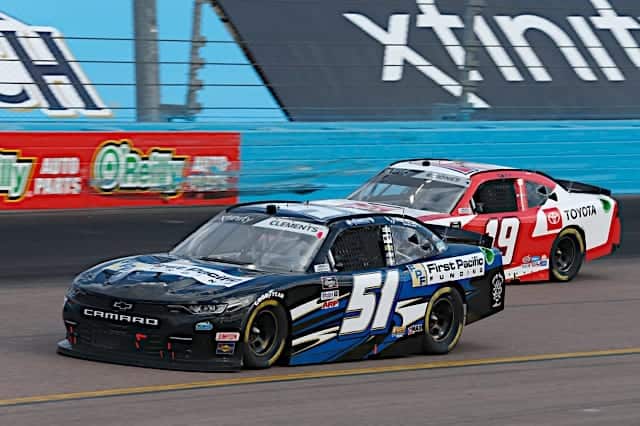 Jeremy Clements Racing is now fully sponsored for the rest of the 2021 NASCAR Xfinity Series campaign.

The family-owned team with driver Jeremy Clements has extended its relationship with First Pacific Funding, the company announced April 30. The No. 51 Chevrolet will now carry the FPF colors in the remaining races of the 2021 season that JCR had not sold to sponsorship backers.

FPF, which first backed the Clements team last season, has already severe as the primary sponsor for Clements in three races this season, including their tenth place run at Phoenix Raceway.

According to the FPF tweet, the deal includes nine races; it is not yet known which races the No. 51 will adorn the FPF branding.

“We started with three races for 2021, but there is no way that we aren’t going to follow this year through to completion, we owe it to Jeremy,” FPF owner Steve Carnes said in a release posted to Twitter.

Breaking News: ⁦@FPFRacing⁩ has agreed to Sponsor all remaining unsponsored races for the Remainder of ‘21. Deal includes 9 races.

“We started w 3 races for ‘21, but there is no way that we aren’t going to follow this year through to completion, we owe it to Jeremy!” SC pic.twitter.com/slBru0l0e5

Through eight races this season, Clements sits eighth in points, well above the playoff cutline. In addition, the South Carolina native has racked up three top 10s.