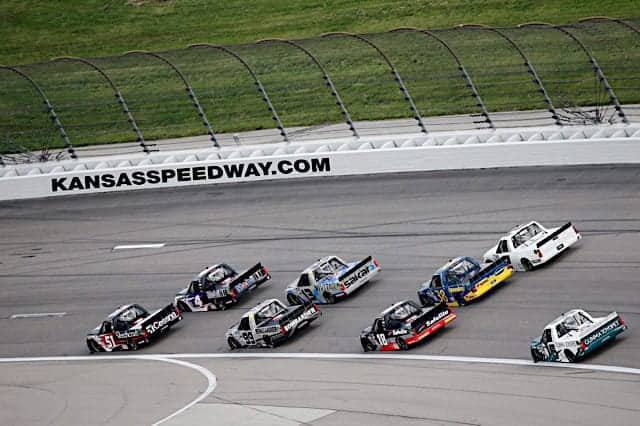 It was Richmond in reverse. After Kyle Busch Motorsports’ John Hunter Nemechek and Kyle Busch dominated the NASCAR Camping World Truck Series race at the Virginia track and Nemechek won while leading the most laps, Busch did the same at Kansas Speedway in Saturday (May 1) night’s Wise Power 200. Busch scored his 61st Truck Series win, leading 59 laps en route to victory. Polesitter Nemechek was out front for 16 laps and ended up fifth.

Busch also powered around strong late-race showings from Ross Chastain and Austin Hill, taking the pair three-wide at the white flag and using the high line to sail around both trucks.

ROWDY GETS IT DONE!

Chastain had a shot to win as Busch was held up on the penultimate restart and the No. 44 cleared his competitors for the lead, but a wreck on the backstretch froze the field and set up an overtime shootout. He appeared to be in a prime position to win at the site of his first Truck Series victory two years ago, but the three-wide pass from Busch relegated the Niece Motorsports Chevrolet to the runner-up spot.

The “Melon Man” has now finished in the top 10 in both Truck appearances so far in 2021 and has three straight.

Busch won the opening stage and only briefly lost the lead to Creed in stage two before the No. 51 took it back, winning the second stage as well. Nemechek followed to round out a 1-2 finish for the Toyota stable.

The eventual winner also made a three-wide pass on the apron earlier in the final stage on Nemechek and Creed, dominating the waning laps before a caution flew with Jennifer Jo Cobb stopped on pit road.

THREE WIDE FOR THE LEAD!@KyleBusch makes a bold move to regain the top spot following the restart! pic.twitter.com/RZRq75Dk25

Busch was pushed wide on the restart and Chastain got the lead, but a Stewart Friesen spin on the backstretch with contact from Derek Kraus lit up the caution lights. This led to the overtime restart, where Busch made the second three-wide pass – this time on the high side – and set sail for the checkered.

Christian Eckes finished fourth and secured his best result of the season. Bayley Currey ended up 12th, his best finish since Darlington 2020, where the series heads next week. Currey ran well and was inside the top 10 late, but fell back on the back-to-back restarts that ended the race.

Hailie Deegan scored stage points in the second segment and finished 13th, her best result to date in the series.

Point Report: Nemechek extended his advantage over Ben Rhodes to 33 points, with Hill, Creed and Friesen rounding out the standings’ top five. Those three drivers are at least 78 points back of Nemechek, though.

Hill and Creed swapped spots over the course of the Kansas race, while Matt Crafton dropped out of the top five. No changes in terms of the drivers constituting the top 10 in points.

Up next: The truckers head back east to Darlington Raceway for the LiftKits4Less.com 200, set for Friday, May 7 at 7:30 p.m. ET. Coverage will be on FS1 for the series’ throwback weekend event.

"I thought I did everything right on that restart." @_AustinHill (P3) shares what happened in NASCAR Overtime. pic.twitter.com/HsdXciux7v

I don’t know when our luck will turn around. Super frustrating. Needed a caution all race long and never got one when we needed it.

Man. The @BMR_NASCAR guys brought a fast @KafkaGranite Toyota Tundra. Got stage points in both stages and in the third stage I made a driver error and made contact with the outside wall. We will bring it in Darlington.

A strong night so far for @HailieDeegan!

The @dgr_racing driver has driven up to 10th in Stage 2. pic.twitter.com/EVDuCjLbWa

Up next: The truckers head back east to Darlington Raceway for the LiftKits4Less.com 200, set for Friday, May 7 at 7:30 p.m. ET. Coverage will be on FS1 for the series’ throwback weekend event.