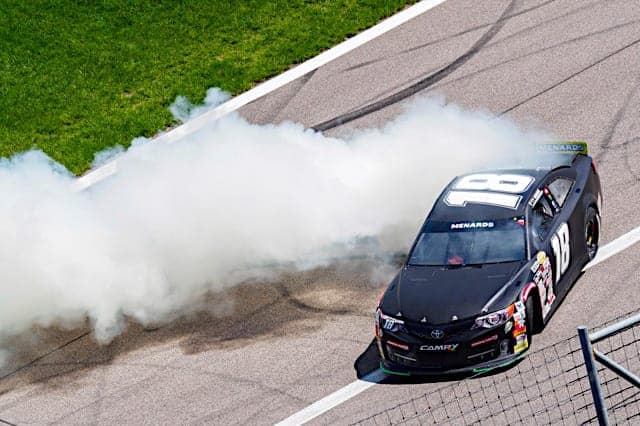 How dominant was Ty Gibbs in the 2021 Dutch Boy 150 at Kansas Speedway? He led all 100 laps, the first time an ARCA Menards Series race winner led every lap since Kevin Swindell accomplished the feat in the 2012 race at Chicagoland Speedway.

It is Gibbs’ first win at Kansas and second of the year, tied for the most with Corey Heim. It’s also his 10th career ARCA win.

Gibbs started from the pole and absolutely walloped the field as only seven of the 20 drivers finished on the lead lap.

“It was a really great day,” Gibbs told FS1. “The first thing I want to say is it’s been 27 years since we lost the best-ever Ayrton Senna. This was for him and all his fans. This really means a lot to me. … I really feel like I’ve changed my life the last couple of weeks and really focused on what’s right and not what’s wrong. It’s awesome to have fans here, it’s really great. I had a really fun time here. I’m going to keep it rolling!”

Drew Dollar finished in second, though his Venturini Motorsports team had a heated exchange with him via radio as he failed to overtake Gibbs on the final restart.

“Unfortunately, not enough to get the No. 18 [Gibbs], he was pretty tough but we did a good job of using our tools all day,” Dollar told FS1. “I was working the tools inside the car and the team did a great job making adjustments on it. Just not quite good enough.”

Heim rebounded to finish third after he received a one-lap penalty during the competition caution pit stop sequence. Venturini Motorsports took too long to pit his No. 20 Toyota, so ARCA officials penalized him. Heim received the lucky dog on the next caution.

“We fired off way too loose,” Heim told FS1. “A couple of things in the right front just didn’t work too well. Other than that, we had the penalty but I don’t know if that would’ve changed the outcome of the race too much. Lacked a little bit on speed and balance today but Venturini Motorsports and I are going to get better as a team.”

Derek Griffith finished fifth in his second and final start of the season.

The race saw three cautions. On the opening lap, Bret Holmes got loose as he was in the middle of three-wide. Holmes spun and Scott Melton had nowhere to go, slamming into the driver side of the No. 23.

We are GREEN for ARCA racing in Kansas … or … we were …

Big trouble on the first lap for Bret Holmes and Scott Melton. Caution is out. pic.twitter.com/AHFkHPIWr0

Both drivers walked away unscathed from their destroyed race cars.

“They were wrecking. I tried to move up,” Melton flatly told FS1 after he was successfully released from the infield care center. “I think someone doored me. Thank God Bret’s ok. I doored him and hit him really hard. It turned out to be a not-so-great day.”

“I’m fine. This is what happens when you get stuck three-wide, you lose the air and get sucked around real quick. I hate it,” Holmes told FS1.

The other two cautions occurred at the lap 50 competition caution and then with 35 to go when Eric Caudell spun into the outside wall. Caudell finished 14th.

After four races this ARCA season, Heim won the season opener at Daytona International Speedway and the third race at Talladega Superspeedway. Gibbs won the combination race for the main series with the ARCA Menards Series West at Phoenix Raceway and vanquished the field Saturday.

The next race on the schedule is at Toledo Speedway on May 22. It will be the first race of the ARCA Menards Series Sioux Chief Showdown, a 10-race championship within the main ARCA schedule.

Why isn’t MONSTER ENERGY on the race car anymore? The more Ty Gibbs talks, the more he is unlikable. Just shut up and quit doing those obnoxious burn outs, WWJD.