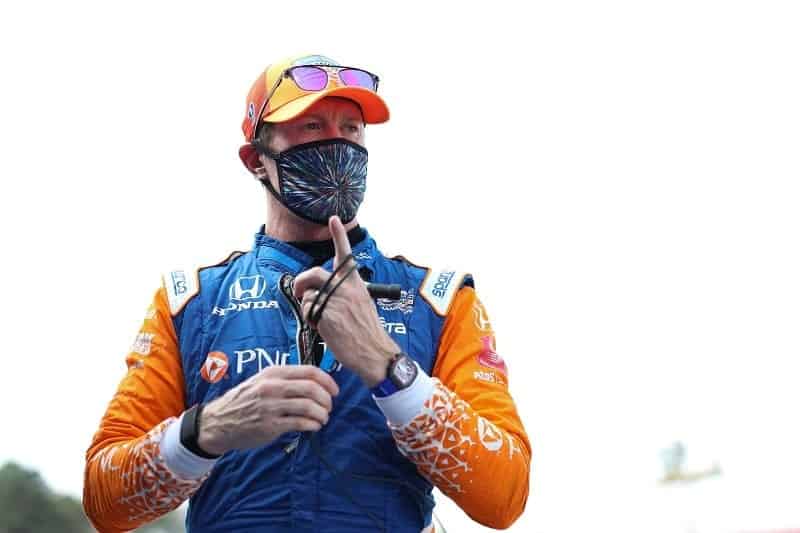 Scott Dixon dominated the Genesys 300 en route to leading a 1-2 finish for the series’ two New Zealanders; Scott McLaughlin chased his fellow countryman, finishing only two tenths of a second behind.

Dixon passed teammate Alex Palou for the lead on the third lap of the 212 lap race, and maintained control over the race to grab his first win of 2021. This also makes Dixon the first IndyCar Series driver to win back-to-back races at the 1.5-mile oval.

Dixon was ecstatic after the race: “I love this place!” he told NBCSN. He described the atmosphere of the race in the final run as “very tense” due to McLaughlin’s pace. The win – the 51st of Dixon’s career – leaves him only one win shy of tying Mario Andretti’s total. “It’d be great to tie tomorrow, if we can” Dixon said.

McLaughlin was thrilled with his performance in his oval debut. “I’ve never been so bloody happy with second!” McLaughlin told NBCSN. He was amazed to find himself chasing his “all-time hero” Scott Dixon, describing his day as “bloody cool.”

The race was didn’t produce much passing outside of the occasional restart and pit stop cycle. Both McLaughlin and Palou remarked after the race that the aero-dependence of the current oval package made passing under racing conditions extremely difficult. Severe tire fall off also hindered drivers following and attempting to pass one another, especially during the first half of the race.

The racing eventually got more competitive towards the end of the night as the sun set and the track lost some temperature. However the stain left in the second groove by the PJ1 traction compound, laid down by NASCAR, meant that the race was essentially one-grooved, much like last year.

Both Sebastien Bourdais and James Hinchcliffe crashed out with hard impacts in turn two. Bourdais went around off the nose of Josef Newgraden while checking up behind a slowing Colton Herta, while Hinchcliffe spun into the wall after aeropush from the advancing McLaren of Felix Rosenqvist sent Hinchcliffe sliding into the PJ1. Herta later retired with a brake fire, while Marcus Ericsson also fell off late in the race after losing a right-rear wheel on pit road.

Tension lingered between Graham Rahal and Jack Harvey as well. Rahal was furious after Harvey threw what Rahal saw as a massive block down the backstretch as Rahal approached with a massive run off the exit of turn two.

After the race, Rahal voiced his displeasure, saying he intended to have a “man-to-man” discussion with Harvey about responsible driving before tomorrow’s race. Rahal said he could not understand how IndyCar could decide against penalizing Harvey. “You can’t move in reaction – particularly at 225 mph!” said the 2016 and 2017 Texas winner.

Harvey was not impressed with Rahal’s reaction. While conceding that another block he threw on Alexander Rossi on the frontstretch may have been excessive, Harvey remarked that he felt he was “well within [his] right to defend.” He continued, “Graham knows where I’m at if he wants to come have a word. I think some of these guys are so used to our car being part-time that they think they can just come by us any time they want.”

At the the checkered flag, Dixon and McLaughlin were followed by Pato O’Ward, Palou and Rahal to round out the top five. Newgarden, Harvey, Rossi, Takuma Sato and Will Power completed the top 10.

The NTT IndyCar Series returns to action tomorrow at 5 PM for the XPEL 375 with coverage on NBCSN.