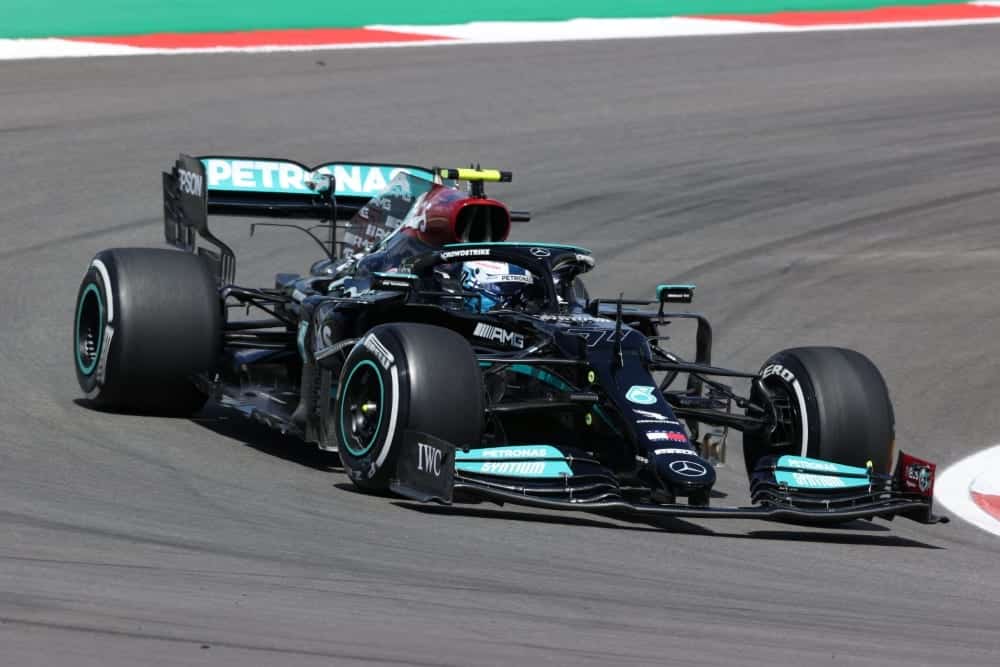 The gap from Red Bull to Mercedes during qualifying runs in practice on Friday was just 0.05 of a second, with Lewis Hamilton predicting a close battle for pole position at this weekend’s Portuguese Grand Prix. But come Saturday, the fight for first ended up just being between the two Mercedes drivers, with Valtteri Bottas just barely pipping Hamilton to pole.

The Finnish driver’s 17th career pole position came with a lap time of 1:18.348, with Hamilton finishing the final qualifying session a mere 0.007 of a second behind. Bottas’ ever-so-slightly faster lap denied Hamilton his 100th career pole, which would have made him the first driver in F1 to hit the century mark for pole positions.

Both Bottas and Hamilton opted to run on the medium tires for qualifying, after struggling for temperature on the softer compounds in practice, while the Red Bulls, along with everyone else in Q3, shod their cars with the soft tires. But after looking competitive all weekend, Red Bull was strangely off the pace in Q3, with Verstappen’s best lap coming in three-tenths of a second behind Bottas’. Verstappen had initially set a 1:18.2 lap, which would’ve been enough for first, but had his time deleted for violating track limits after a slight oversteer moment sent him wide in turn four, and he couldn’t manage to claw back the gap on his final attempt.

His teammate, Sergio Perez, never came close to challenging the top three, finishing Q3 five-tenths of a second down on Bottas. He will line up fourth on the grid for tomorrow’s race, ahead of Ferrari’s Carlos Sainz, whose qualifying lap was nearly three-tenths faster than that of his teammate Charles Leclerc, who starts eighth.

After Alpine showed some surprising pace in practice, Esteban Ocon managed to sneak his blue Alpine A521 into Q3, finishing the session sixth, just 0.003 behind Sainz. Lando Norris qualified in seventh for McLaren, while Alpha Tauri’s Pierre Gasly finished ninth and Sebastian Vettel rounded out the top 10 in his Aston Martin. This is Vettel’s first time reaching Q3 in 15 grands prix.

After placing in the top 10 in first practice, George Russell had a bold target for Saturday’s qualifying session, aiming to reach at least Q2. He ended up matching his expectations, working his way into Q2 and nearly putting his Williams in the top ten, missing out by just 0.05 of a second. Russell will start 11th tomorrow and will get a free choice of tires to start the grand prix on, which could help him reach his goal of “fighting hopefully for points on Sunday.”

Daniel Ricciardo seemed optimistic after Friday’s practice sessions, suggesting that he was getting comfortable in his new McLaren MCL35M and that he would “be right in the mix tomorrow.” But a lockup in turn 13 on his flying lap in Q1 cost him time and he ended up over a second behind his teammate, and was ultimately pushed into the elimination zone by Esteban Ocon near the end of the session. Ricciardo starts in 16th on the grid tomorrow, ahead of Lance Stroll, who couldn’t find the same pace that propelled his Aston Martin teammate to a Q3 appearance.

Last week, F1 boss Stefano Domenicali suggested that a decision regarding Saturday sprint races was imminent, and on Monday the sport presented a plan for sprint race qualifying at three events during the 2021 season. The sprint races will last 100 kilometers, approximately one-third the length of a traditional grand prix, and will determine the grid for the main race on Sunday. Points will be awarded to the top three finishers. Silverstone and Monza are frontrunners for trialing the sprint race format this year.

Although the drivers seem open to the idea, many fans and pundits have raised concerns. Fewer laps in the Saturday race will eliminate tire management, allowing more flat-out racing, but with the bulk of the points up for grabs the following day, drivers might play it safe when it comes to overtaking in the sprint races. A crash will not only mean a lower starting position on Sunday, but will also burden their team with repairs the evening before the grand prix.

The top teams will likely still rise to the front during the sprint race regardless of their Friday qualifying performance, but the new parc ferme rules could shake things up. With just one practice session on Friday morning to iron out any kinks, it will be trickier for drivers to fine tune their setups, and if conditions change drastically between Friday, Saturday and Sunday, cars that were optimized for qualifying might later struggle in the sprint race or grand prix.

The plan also raises questions for F1 statisticians: how should a sprint race win be categorized? Pole position doesn’t seem like the appropriate title, since the session is not based on one-lap qualifying pace, but a sprint race win also isn’t equivalent to a traditional race victory, due to the shorter distance and lack of pit strategy.

While it is good to see F1 experimenting to boost the series’ competitiveness, the skepticism regarding the sprint race format is justified. Whether F1 implements sprint races in future years should be based on the racing product it creates, not the increased viewership numbers it will likely bring.

On Wednesday, F1 announced another major change to the 2021 schedule, with the Canadian Grand Prix cancelled for a second straight season due to the COVID-19 pandemic. Instead, F1 will travel to the Istanbul Park Circuit during the second weekend of June for the Turkish Grand Prix.

It is a shame that F1 will miss out again on visiting the beautiful Circuit Gilles Villeneuve, located on Notre Dame Island in the middle of the St. Lawrence River in Montreal, but F1 also revealed a two-year contract extension for the Canadian Grand Prix, meaning that Montreal will host grands prix until at least 2031.

Istanbul Park’s addition to the calendar is an exciting development after the track produced a thrilling race last season on its return to F1 after nine years. The 2020 edition saw Lance Stroll take his first career pole and lead much of the race, with the drivers struggling for grip on the wet track. Lewis Hamilton ultimately prevailed, charging from sixth to take the win and his seventh world championship in the process.

Fans cannot bank on having rain spice things up again, but the track features good overtaking opportunities, stunning elevation changes, and the challenging left-hand quadruple-apex turn 8. Additionally, the circuit was repaved before last year’s grand prix, contributing to the low grip, and since few other events have been held at Istanbul Park over the past several months, the surface could still be slippery come June.