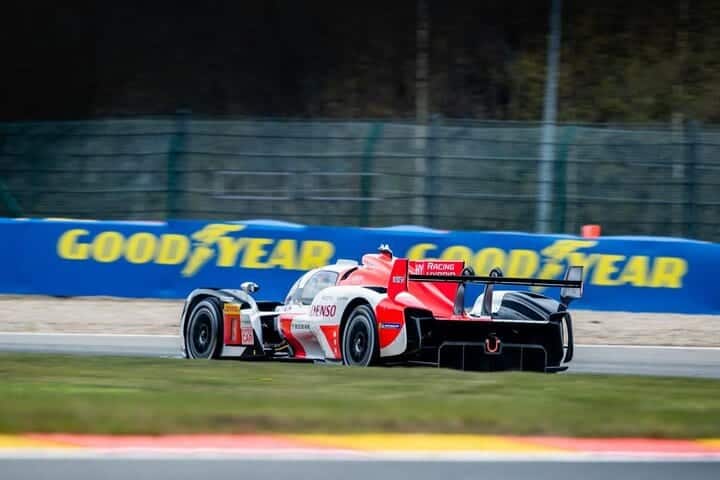 In the debut race for the FIA World Endurance Championship’s new Hypercars, Toyota GAZOO Racing’s GR010 Hybrid dominated the day.  However, it was the slower No. 8 shared by Sebastien Buemi, Brendon Hartley and Kazuki Nakajima that won the 6 Hours of Spa-Francorchamps Saturday (May 1).

On the initial start, United Autosports’ Phil Hanson was able to jump the Toyotas and briefly claim the overall lead.  However, Mike Conway was able to snatch the advantage back with Buemi quickly following.  The Toyotas each had their own pit strategy, while Signatech Alpine had a different one due to the need to make more pit stops under the given rules.

At the beginning of the fifth hour, Kamui Kobayashi drove into the Bruxelles curve too fast and locked up his brakes.  That sent him off-course and into the gravel.

The incident brought out a full course yellow (in the WEC, a full course caution is the equivalent of a virtual safety car in Formula 1) while a crew was dispatched to pull Kobayashi out of the trap.  He ultimately went from leading the race to a lap down.

Kobayashi’s issues gave the overall lead to Signatech Alpine’s Matthieu Vaxiviere.  Vaxiviere was quick in his Alpine A480-Gibson, but didn’t have the strategy on his side.  During the full course caution for Kobayashi’s incident, Toyota GAZOO Racing pitted Nakajima as he was in position to make it to the finish on one more stop.  Vaxiviere and Signatech Alpine didn’t have that luxury.

Buemi took the No. 8 Toyota back to the lead for the last time with 37 minutes to go when Signatech Alpine made their final stop.  From there, it was a quick run to victory.

The margin of victory was 67.196 seconds over Signatech Alpine’s Vaxiviere, Nicolas Lapierre and Andre Negrao.  The No. 7 Toyota of Conway, Kobayashi and Jose Maria Lopez ultimately ended up a lap down in third.  They would have finished on the lead lap had they not been forced to serve a drive-through penalty for contact with Porsche GT Team’s No. 91 Porsche 911 RSR-19 that occurred prior to the trip to the gravel.

In LMP2, the entire weekend belonged to United Autosports.  The team was fastest in all three practices and Filipe Albuquerque won the class pole, out-qualifying Signatech Alpine in the process.  On the start, Hanson was able to mix it up with the Hypercars.  In doing so, he was able to put quite a bit of distance on the rest of the class.  20 minutes into the race, he had a six second lead over Racing Team Nederland’s Giedo van der Garde.

Outside of rounds of pit stops, United Autosports was never seriously challenged during the race.  They led all but five laps in class to take the win.  The only mistake they made all day was an unsafe release from their pit stall after Fabio Scherer had gotten in the car, which resulted in five seconds being added onto the following pit stop.

Further back, penalties played a substantial role in the race.  Both of the Jota Sport entries served drive-through penalties for full course yellow regulation breaches.  The No. 28 entry with Tom Blomqvist driving earned a second penalty for dangerous driving after he had contact with the Signatech Alpine entry in the Eau Rouge-Radillion complex.  Blomqvist was also given two penalty points on his license for the move.  Dragonspeed’s Juan Pablo Montoya was given a drive through penalty for causing an incident for the Aston Martin of Ben Keating entering Pouhon.

Albuquerque, Hanson and Scherer’s margin of victory was a lap over the No. 38 Jota Sport entry of Antonio Felix da Costa, Anthony Davidson and Roberto Gonzalez.  The sister No. 28, despite an extra penalty, was third with Blomqvist, Sean Gelael and Stoffel Vandoorne.  Racing Team Nederland’s van der Garde, Frits van Eerd and Job van Uitert were two laps down in fourth, while Inter Europol Competition’s Alex Brundle, Jakub Smiechowski and Renger van der Zande were fifth.

The GTE-Pro class was dominated by Porsche GT Team’s Kevin Estre and Neel Jani.  Estre won the class pole by more than a second Friday and took little time to run away from the field Saturday.  Outside of pit stop windows, the Porsche team was never seriously challenged en route to victory.

The margin of victory was 34.636 seconds over AF Corse’s James Calado and Alessandro Pier Guidi.  The second Ferrari of Miguel Molina and Daniel Serra was third.  Corvette Racing’s Antonio Garcia and Oliver Gavin finished a lap down in fourth.  For Gavin, this was his final career race as he is permanently stepping away from driving in order to a launch a high performance driving school.

GTE-Am was likely the most competitive of the classes.  Keating started from the pole and led early in his Aston Martin.  However, the focus was at the back of the class.  Matt Campbell, driving a car that was repaired after a qualifying crash, charged through the field.  In just 15 laps, Campbell went from the rear of the grid to the class lead.  Unfortunately, mechanical problems took the No. 77 Porsche out of the race.

Further back, AF Corse’s Francois Perrodo had a decent start to the day, but the team’s Ferrari truly came to life once Alessio Rovera got behind the wheel.  With Rovera at the controls, the No. 83 rose to the class lead.  Beyond the second hour of the race, AF Corse were not challenged as Rovera, Perrodo and Nicklas Nielsen claimed the win.

AF Corse’s margin of victory was 44.461 seconds over the Aston Martin of TF Sport’s Keating, Felipe Fraga and Dylan Pereira.  One lap back in third in their GTE-Am class debut was Cetilar Racing’s Roberto Lacorte, Antonio Fuoco and Giorgio Sernagiotto in their Ferrari.  This came despite two separate spins early in the race.  The No. 54 AF Corse Ferrari of Francesco Castellacci, Giancarlo Fisichella and Thomas Flohr were fourth, while Dempsey-Proton Racing’s Andrew Haryanto, Alessio Picariello and Marco Seefried were fifth in their Porsche.

Unlike qualifying, which took twice as long as expected due to two red flags for crashes that required repairs to tire barriers, Saturday’s race was fairly clean.  There were a lot of penalties assessed, but the race was fairly clean.  The Hypercars finally showed that they had the speed to separate themselves from the LMP2s, something that had been suspect in the week leading up to the race.

The FIA World Endurance Championship will be off for the next few weeks.  The second round of the calendar is the 8 Hours of Portimao, scheduled for June 13 at the Algarve International Circuit.  The race is currently scheduled to be the debut of the new Glickenhaus 007 LMH.