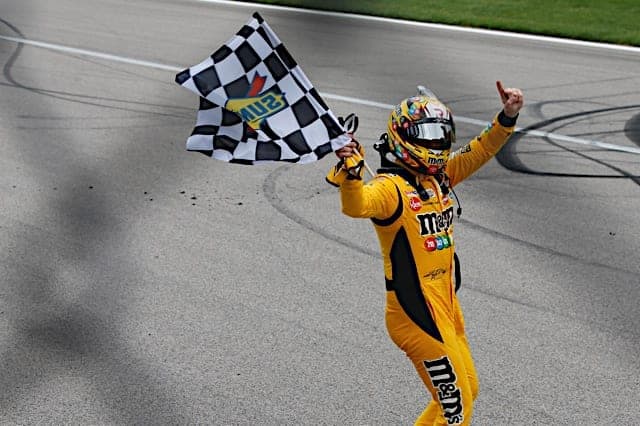 Kyle Busch not only won on his birthday on Sunday (May 2) afternoon, he also won the NASCAR Cup Series’ Buschy McBusch Race 400 at Kansas Speedway.

It was an overall fitting afternoon for the now-36-year-old, who scored a win in his 17th straight season (second only to Richard Petty, who won in 18 straight) and joined Cale Yarborough as one of only two drivers to win on his birthday more than once.

Busch also completed the sweep of Kansas after winning the Camping World Truck Series event on Saturday (May 1) night. The win also came just days after his wife Samantha revealed that the couple had been unsuccessful in their most recent attempt at pregnancy, continuing their battle with infertility.

“You talk about ups and downs of racing, it’s been a lot of downs of life for us,” he said to FOX Sports’ Jamie Little after the race. “I got a great opportunity and a great job, no doubt. But struggling with the infertility and stuff like that with Samantha, so…hopefully [son Brexton] won, I don’t know what the results are from Brexton’s race today. Just a great day to be able to put this [car] up front.

“[…] Cool to get everybody back in victory lane again this early in the season,” he added, “to be able to get some of these points going out way now and hopefully – oh, hell, I just remembered: the Buschy McBusch Race, the Busch won it. What do you know? Right on.”

The victory marked the first for Ben Beshore, Busch’s new crew chief for 2021. The pair visited victory lane in the Busch Clash in February, but Kansas brought the duo their first points-paying triumph.

Brad Keselowski and William Byron, the top two last week at Talladega, led the field to green and dueled for the majority of stage 1, but Kyle Larson‘s surging Chevrolet surpassed both cars and seemed to have set sail for the green-and-white checkered flag.

With three to go, though, Busch used some birthday magic to propel his No. 18 to the front, sending his Toyota into the corner to draw even with Larson. Busch won the battle, winning the stage amid lapped traffic.

The first incident didn’t occur until there were 37 laps left in stage 2, when Cody Ware spun around coming to pit road. No caution was thrown.

Ricky Stenhouse Jr. stayed out during green-flag pit stops to lead for an extended period in the second stage, but eventually had to make his scheduled stop. Larson dominated, winning the segment as well as the race off pit road, and this time outdueled Busch to take the lead at the start of the third stage.

Busch fell back into the clutches of Joe Gibbs Racing teammate Denny Hamlin, and the lead then swiveled to Chris Buescher, who stayed out the longest during the final round of green-flag stops. A tire from Tyler Reddick‘s crew ended up in the infield grass and essentially just sat there for some time before Buescher came to pit road, after which Larson cycled back to the lead and the caution finally flew.

This was the first caution for anything other than a stage break or a competition yellow up to that point…after which incidents began to abound.

Larson and Hamlin battled for the top spot but Hamlin, still looking for his first win of the year, drove in too deep and brushed the wall. The damage was significant enough, though, and Hamlin went into the next turn and smacked the wall even harder to bring out another caution.

This gave way to fakers and takers where pit road was concerned, with Larson, Busch and others swerving back onto the track and a number of competitors committing to pit road to set up for the final laps.

A yellow flag immediately followed the restart when Stenhouse and Austin Cindric, the latter of whom was running in the top 20, collided on the backstretch and Kyle Busch shot to the lead on the ensuing restart.

Another caution waved for Christopher Bell and company when the No. 20 spun coming out of turn 4 and collected both Stenhouse and Ryan Preece, ending both JTG Daugherty cars’ afternoons.

Ricky Stenhouse Jr.'s day goes up in (a lot of) smoke late at Kansas. https://t.co/CRI5SioW3e pic.twitter.com/9x1URMBhMb

Busch cleared all comers on the final overtime restart and held off the field en route to the victory, as the dominant Larson pushed Ryan Blaney too hard in the first corner. The No. 5 nearly turned the No. 12 and both fell back into the field, while Keselowski looked to have a run but went wide.

Y'ALL … THAT WAS AWESOME. Wow.

Rate Ryan @Blaney's incredible save on a scale of 1-12: pic.twitter.com/Ba4exOgiKf

Kevin Harvick found himself in second when the dust cleared, but couldn’t do much to catch Busch as the No. 18 cruised to the checkered. Keselowski, Matt DiBenedetto and Chase Elliott rounded out the top five, while Martin Truex Jr., Reddick, Buescher, Byron and Austin Dillon completed the top 10.

“It’s hard sometimes,” Busch said post-race of remaining focused. “When you go through the lulls, you go through the disappointment, you go through the dejection and the understanding – or the un-understanding, I guess – of just whether or not you can still do it, there’s a sense of doubt there, for sure. But you just gotta keep perservering, keep digging and putting your focus forward and being able to come out here and win this thing. …Ben Beshore, it’s his first win as a crew chief, so happy for him, happy for my guys and let’s celebrate.”

The Cup Series next returns east to Darlington Raceway, where the 2021 throwback race will be held next week. The Goodyear 400 is set for Sunday, May 9 at 3:30 p.m. ET on FS1.

Congrats to Kyle. Is it just me or does the AMR safety crew look like they are recruited at Overeaters Anomymous?

Certainly looked as though the
track crewmember in question is very likely a connoisseur of the BBQuisine that KC is renowned for?
As for Kyle’s victory, he should own being known as “Buschy McBusch” from here on out!!!

Hamlin tweet- “it rhymes with duck”
Ahhh Denny, choke rhymes with joke too. You should be used to it.

Sweeping a NA$CAR weekend used to be a big deal. Now it doesn’t even get mentioned.
A great Kansas weekend for Toyota and Joe Gibbs Racing. Winning isn’t easy so don’t hate the players.