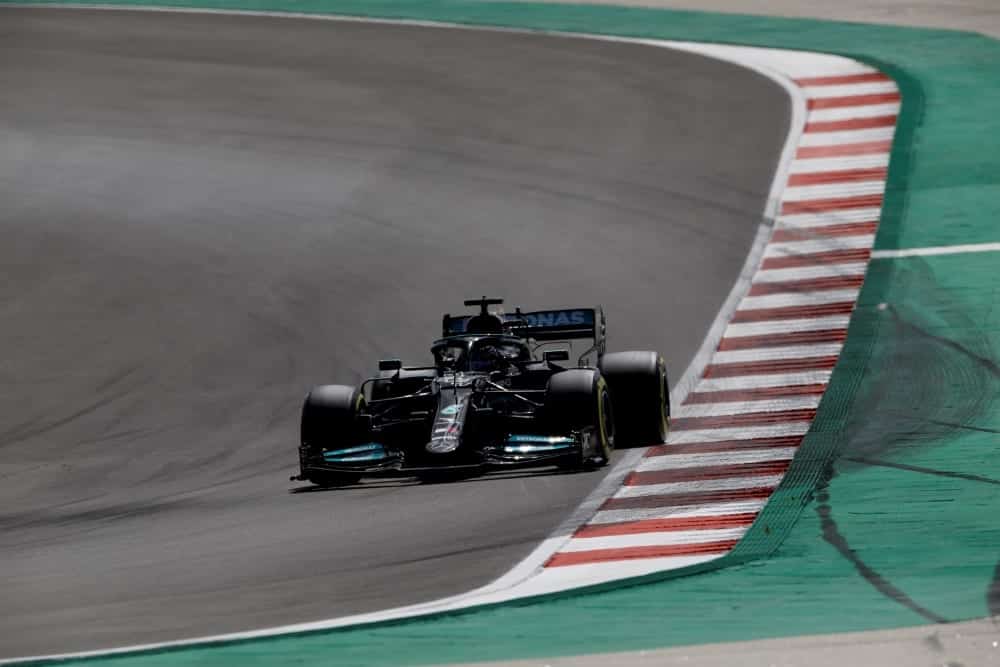 It was another picture perfect day in Portugal, and another perfect day for Lewis Hamilton. After a questionable mistake nearly cost him a podium last week, this week the 7-time F1 world champion was unbeatable.

Dominating the second half of the race, Hamilton came across the line nearly 30 seconds ahead of second place to claim win No.2 on the season and No. 96 of his illustrious career. Imola winner Max Verstappen, who pitted late to snag the fastest lap of the race, came across the line second. Meanwhile pole-sitter Valtteri Bottas slipped down the order to P3 at the checkered flag.

As the lights went out, Bottas nabbed a great start on Hamilton. Holding the lead into turn one, Verstappen would hound the Mercedes of Hamilton for second. For the third week in a row the Safety Car made an appearance, this time it would be for contact between the two Alfa-Romeos causing Kimi Raikkonen to retire from the race while debris showered the track like confetti.

On the ensuing restart, Bottas controlled the field and allowed Verstappen to jump Hamilton for second. The Dutchman held on for around three laps before Hamilton kicked on the jets, passing Verstappen on Lap 11 and taking the lead on Lap 20.

Bottas slid down the order, while Verstappen gave chase. During green flag pit stops, Red Bull’s Perez decided to stay out and gamble for a safety car. Nevertheless, luck wouldn’t favour Perez and the safety car never came. While Hamilton chipped away at Perez’s lead, Nikita Mazepin decided to add Perez to the list of people that are mad at him. Chopping down on Perez while attempting the lap the Russian, Perez lost nearly 2 seconds due the move and Mazepin was handed a 5 second time penalty by the FIA.

When it was all said and done, nobody could catch Hamilton who cruised in usual fashion to the victory. Both Verstappen and Bottas pitted for soft tires in an attempt to score fastest lap, which Verstappen went on to snag on the last lap.

“Mentally tough race, keeping it all together, it was very windy out there,”said Hamilton. “Lost out at the restart which was not good, I was not happy. With Valtteri I had to make the move early on before the tires were destroyed. Debrief, a lot to download from today, today wasn’t all perfect. I need to look at those areas.”

A disappointing day for Williams’ George Russell, as despite a brilliant P11 in qualifying the Brit suffered grip issues and finished 16th. Raikkonen was the race’s only retirement, while neither Aston Martins would score points.

While third place might not seem like a disappointment to some, for Bottas it was a sour result on what should’ve been a win. After suffering sensor issues, the Fin wasn’t able to recover slipping over 5 seconds back of Verstappen for second.

“In the first stint, I just didn’t have the pace,” Bottas said. “The second stint was good, but I had an issue with a sensor so I couldn’t get Max. Overall we had a strong package today.”

You don’t know how, but you know he will always find a way to win. It might get old, but you are watching history in the making.