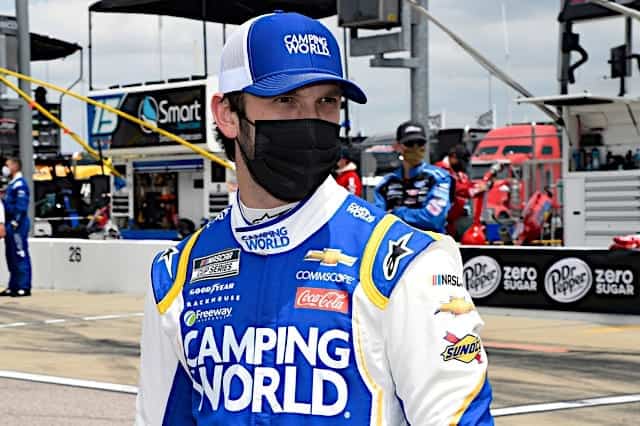 Somehow, after the Buschy McBusch Race 400 on Sunday (May 2) at Kansas Speedway, we are now 11 races into the NASCAR Cup Series season. There have been many storylines to watch in 2021, arguably the most we have seen in a season in quite some time. One of those focus points has been on the new teams in Cup, with more on the way. It should come as no surprise that 23XI Racing has earned the most attention, though on-track results have proved otherwise, and that could be key in the future.

Daniel Suarez headed into Kansas Speedway looking to get some footing back under him. After back-to-back top 20s at Atlanta Motor Speedway and the Bristol Dirt race (where he finished fourth), Suarez had finished 32nd, 16th and 23rd in the previous three races. Fortunately, Suarez found some fresh air in the Sunflower State with an 11th-place finish.

The majority of the race looked as if it would provide little opportunity to work on the car as prior to lap 230, the only cautions had been for a competition yellow and stage breaks. The No. 99 Chevrolet struggled with handling for the first half of the race, finishing 22nd and 30th in the stages. However, one thing that crew chief Travis Mack and Suarez were not afraid to try was strategy. After a cycle of green-flag stops in stage two, Suarez attempted to stay out much longer than the rest of the field in hopes of a yellow. Unfortunately, the yellow didn’t come, and Suarez was forced to give up track position to pit.

Thanks to a string of cautions in the final stage, Suarez got his No. 99 Camping World Chevrolet back on the lead lap. Another caution set up an overtime restart and an opportunity for the Monterrey, Mexico native to gain more positions. Contact between leaders Ryan Blaney and Kyle Larson caused many drivers to jockey for position, allowing Suarez to scoot by and score a solid 11th-place result. It marked Suarez’ second-highest result of 2021, as well as his best finish at Kansas since a seventh-place run in his debut at the track in 2017.

“Well, the guys, they never give up.” Suarez said in a Team Chevy release. “We had a good car, but we never really found the balance on the car. The car had good speed. We have had this package on some other 1.5 miles, and we were fast in the top 10. But this time, we were just all over the place. We were just talking about that; like on the splitter, tight, loose, all over the place, and we were never able to find the right balance.

“By the time that we were decent, it was late. … I feel like we were lucky a little bit in that last restart with four tires. The car was fast in the beginning, and we were able to rescue a decent finish.”

When you win the Super Bowl of NASCAR, the Daytona 500, a lot of eyes are glued to your performance for the rest of the season. That has been the case for Michael McDowell, who has had a career year since his upset in February. McDowell nearly followed up his Daytona 500 win with another superspeedway triumph at Talladega Superspeedway on April 25, finishing third.

Kansas was going to be a challenge for the No. 34 team, as is the case for most underfunded teams on intermediate tracks. McDowell started the race from the third position thanks to NASCAR’s current qualifying formula. By the lap 25 competition caution, McDowell’s loose-handling car had fallen to 17th. The Phoenix, Arizona native had fallen to as low as 30th before finishing 27th in stage one. He continued to fight handling issues as long green flag runs defined the first two stages, with McDowell finishing 29th in stage two.

In the final stage, McDowell used the wave around a couple of times to get back on the lead lap, cracking the top 20 multiple times. A string of yellows in the late stages of the race allowed the No. 34 CarParts.com Ford to make pit stops for four fresh Goodyear Eagles. McDowell entered the top 15 with a restart with 14 laps to go. A late frenzy on the final restart allowed McDowell to gain a few spots and ultimately conclude the race in 13th for his sixth top-20 finish of the year.

“That was a good recovery.” McDowell said following the race. “We started up front in our CarParts.com Ford Mustang, but we just didn’t have the balance to stay in the top-10. Drew and the team made the adjustments we needed, but we had to race back through the field. We just kept gaining spots all afternoon and came close to a top-10 for CarParts.com. We learned some things to get better, too. So, not a bad day.”

Suarez and McDowell were fairly lonely in the dog yard after long runs plagued many underdog teams.

The NASCAR Camping World Truck Series returned to action at Kansas for a night under the lights on Saturday (May 1). Bayley Currey turned in a solid performance in the No. 45 Niece Motorsports Chevrolet with a 12th-place finish in his season debut in a truck. He, too, was one of the only underdogs to crack the top 20 in an eventful weekend.

Take us back to the good ole’ days! Set the tape recorder, grab your portable radio, head to the cruise-in and slip on some of your 20th century NASCAR hero’s gear for the highly anticipated throwback weekend! All three series will throw back to blasts in the past of the sport or their sponsors at “The Lady in Black,” Darlington Raceway. This venue will provide a mounting test to all underdog teams who are looking to take a bite and tame the South Carolina track.

The toughness and attrition of this track will allow drivers in both of the lower series to make a splash and earn strong results for their respective teams. It’s also an opportunity for drivers to make mama proud, as the series heads to the intermediate track on Mother’s Day weekend.

What a recovery from @Daniel_SuarezG and this entire @CampingWorld team – brought it home P11 ?

No give up in this team ? pic.twitter.com/DV8bWqjyEa