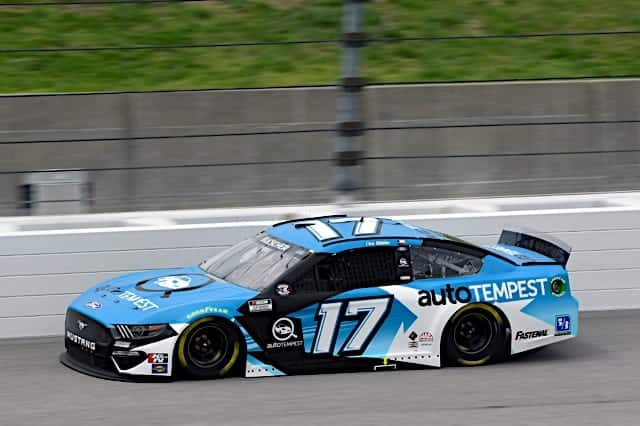 Chris Buescher and crew chief Luke Lambert seemed to be in prime position to capitalize on a late caution at Kansas Speedway.

But the caution they needed never came – not until after the No. 17 team was burnt by NASCAR’s decision to withhold the yellow flag until after Buescher hit pit road.

An uncontrolled tire left the pit box of Tyler Reddick during the final round of green-flag pit stops rolled into the grass on the infield of Kansas Speedway during the Buschy McBusch Race 400 on Sunday (May 2). The tire rolled into the infield on lap 215, but the caution didn’t fly until lap 229, after a gamble by Lambert to catch a caution and gain track position was nullified by NASCAR’s stranglehold on the flag.

Thanks to three cautions that followed the stoppage for the stagnant tire, Buescher rebounded from being at the tail end of the field all the way back to an eighth-place finish, his second top 10 of the year and first since Atlanta Motor Speedway on March 21.

“That was a good ending for [our] autoTempest Ford Mustang group,” Buescher said in a post-race press release. “It was a fight all day. We worked hard at it, and everybody did a great job to get us home with a top 10.”

“The late race restarts were pretty wild. We came out in once piece and the car is clean and I am just glad to be able to get autoTempest their first top 10 in NASCAR.”

The end result was good, but why was the No. 17 team put in this position in the first place?

It is not unusual for a tire to escape to the frontstretch grass during pit stops, nor is it entirely unusual for NASCAR to wait a couple laps to allow more pit stops to occur.

This, however, was not just a couple of laps. This was nearly 15 laps around a mile-and-a-half racetrack with everyone clamoring for all they’ve got, knowing that was the time to set themselves up for a run to the checkered flag at lap 267.

Crew chiefs – namely Lambert and Brian Pattie, leading Ricky Stenhouse Jr.‘s No. 47 team – were calling pit strategy based on the fact a tire was sitting in the infield grass and bound to bring out a caution.

They were right. That tire absolutely brought out a yellow. But not until after both teams made their pit stops.

What made the tire more dangerous and worthy of a caution at lap 229 than it was at lap 215?

I understand there are significant strategy ramifications from that decision. A bunch of drivers would have been trapped one lap down and forced to take a wave-around instead of pitting under yellow.

But NASCAR’s role here should not be one that cares whether team’s strategies are affected. Their role in this situation should only focus on safety.

I get it. Nobody crashed. No one was in imminent danger. It wasn’t until after the caution for the lonesome tire that cars actually started to spin out, and no one usually gets to that part of the grass anyway.

On the other hand, did the tire truly necessitate the caution? That’s a question worth asking.

If it isn’t provoking an imminent danger, and a pit crew member or NASCAR official can reasonably cross pit road and retrieve the tire, why throw the yellow at all? Either it is worthy of a caution flag as soon as it happens, or it isn’t worthy of one at all.

Journalistic opining aside, the competitors who actually deal with the consequences of NASCAR’s calls seemed to side with the tower in this particular instance.

“I think everybody getting into their pit stops and everything cycling back through and getting back to zero is a good call,” Kyle Busch, Sunday’s race winner, said. “I would go with that all day long. I just don’t know if pit cycles were done and then we ran 10 more [laps], or if pit cycles were done and we ran like two more. If that’s the way it was, then I thought that was a good call.”

His crew chief, Ben Beshore, appreciated the strategic implications of the call but noted circumstances come into play as well.

“We were ready in case they threw a caution, but to be honest with you, I was expecting them to keep it out until it fully cycled, especially with only a handful of laps there left,” Beshore said. “I didn’t feel like it was a safety hazard by any means where it was. It was so far away from the racetrack.

“I think if we were at a different track or say Atlanta [Motor Speedway] and it rolled out from pit stall 40 and was 12 feet from the racing surface, then that’s a different story. But where it was, I thought it wasn’t a safety issue.”

If it wasn’t a safety issue, did NASCAR truly need to throw the caution? I still lean toward yes – and sooner – but are there more effective answers right now?

“I don’t know really if there’s a better solution,” Brad Keselowski, Sunday’s third-place finisher, said. “If there was a better solution, maybe I wouldn’t be [OK with the decision], but I don’t have one. I can tell you that. Somebody is always going to be upset on them deals, and it’s kind of pick your poison.”

Buescher was fortunate to have so many further opportunities to launch back into the top 10 and complete one of his best runs of 2021. Intermediate tracks have seemingly become a stronger suit for Roush Fenway Racing, considering Buescher also won the opening stage at Homestead-Miami Speedway on Feb. 28.

His whole day, though, could have been upended by a decision made in the NASCAR tower.

This always comes down to if it benefits a Nascar favorite son. I would have loved to hear transmissions among officials.

Some reporter somewhere heard those communications. Print the dang story.

I don’t get this one. On one hand – I get letting the stops cycle through, but maybe there needs to be communication between the tower and that team saying hey, we consider this a low safety hazard and wont throw the caution till after all have come to pit road. But even that is dicey cause now you are manipulating strategy.

So I am going to run with the “It was far from the racing surface and not a hazard” OK – then why call the caution after pit cycles have finished? Why not just have someone run out there real quick and pick it up.

Maybe the final person who makes the call had to run to the toilet and was late getting back.

You know if it had been Elliot out there, they would have thrown a caution

The best way NASCAR should have handled this was to throw the caution right after the 17 crossed pit entry.
This would have slowed the cars on track and allowed the 17 to not get lapped due to green flag racing. Yes he would have had an advantage but the others teams had choices too at that point, pit or not, right sides and get, etc.
Once again NASCAR has it out for Roush.

hazard or not a hazard come on nascar if you keep doing this stuff your ratings will continue to go down.. the number 17 car is not one on the chosen ones, just listen to the broadcasts, everyone get a atta boy but chris..and twenty other drivers are just fillers. and you only know they are in the race after the wrecks..come on guys at lease go from first to last and say something about the car and driver at least at the start of the race I would like to see the bottom 20 positions start the race and then pull into the pits after one lap..get some attention that way.. saw that happen at a legends race in texas once, worked very well some things were addressed and changed.. but i am just a old fan hangin in there