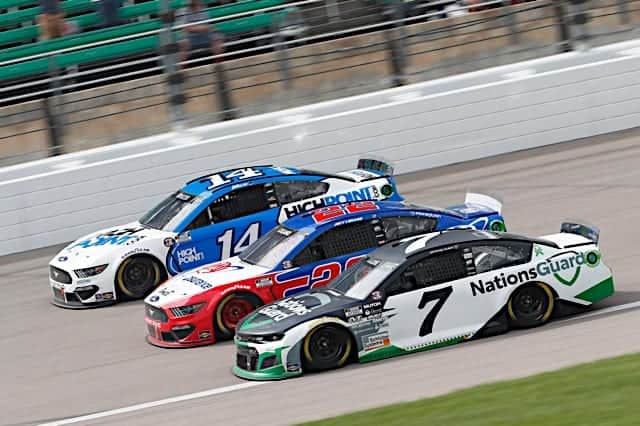 Kansas Speedway is a venue that can often be quite pedestrian. Then again, since the track was reconfigured in 2012, it has shown some teeth from time to time. You never know when it’s going to come out and bite you. Sunday was not really one of those days.

Prior to the race, FOX Sports 1 aired a piece on Ricky Hendrick, Rick Hendrick’s son who won his one and only NASCAR race at Kansas Speedway in 2001. As you probably remember, Ricky was killed along with 10 others when a Hendrick Motorsports plane crashed into Bull Mountain while on approach to Blue Ridge Airport near Martinsville, Va.

As a result, Kansas does hold a special place in Rick’s heart. After all, his son was the first NASCAR driver to win a race there (the-then Craftsman Truck Series served as primary support for the inaugural Indy Racing League race there back then).

Chris Myers talked with Rick Hendrick and Rick’s wife Linda about Ricky and how they try to keep his memory alive. A group of Ricky’s friends restored Ricky’s race hauler from his late model days, turning it into a rolling memorial that Rick cherishes. Likely the most visible tribute to Ricky today is the scheme that Kyle Larson is racing this year in Cup. It’s the same one that Ricky drove in the then-Busch Series until he got hurt in 2002 and chose to step out of the car and focus on team management.

Naturally, Kansas is a big deal for Clint Bowyer, and he’s completely in the tank for the Kansas City Chiefs. As a result, we were treated to a feature where Bowyer and Chiefs quarterback Patrick Mahomes raced on the virtual Kansas Speedway (on iRacing) against Kyle Busch. I don’t get why Eric Stonestreet was there, to be honest.

I’m unclear on whether Mahomes had driven on a sim before this piece was shot, but it seemed like he had fun with it. He did have a little trouble with keeping the car straight, though.

Also of note, FOX Sports (and NASCAR) let Michael Waltrip do his Grid Walk again. However, they didn’t go about this correctly. While acting somewhat ridiculous is Waltrip’s shtick at this point, it could have been done way better.

Absolutely give Waltrip a boom mike. Waltrip should have been equipped with a headset and microphone, sort of like what the booth commentators have. It would have made the segment significantly less awkward and prevented some of the shenanigans.

Sunday’s race was not the most memorable event in NASCAR history. Probably the instance that stood out the most was the caution with 38 laps to go due to a wheel that got loose during a pit stop and came to rest in the grass.

This situation has happened multiple times in the past. The protocol mostly appears to be to let the round of stops play out, then throw the yellow in order to take care of it. However, the round of stops was elongated due to certain teams (most notably Chris Buescher’s No. 17 team) staying out longer on alternate pit strategies. As a result, the wheel sat in the grass for 15 laps before the yellow flew.

The fact that it was just hanging out there for so long is probably what ticked everyone off so much. It seems like this situation happens once or twice a year in NASCAR. Waiting until a round of stops finishes is typical, unless something unexpected happens.

The best example of an unexpected situation was when Jimmy Watts, then the gasman for JTG-Daugherty Racing, crossed more than halfway between pit road and the track itself at Atlanta to retrieve a loose tire in 2009.

Not only was NASCAR forced to throw the yellow here in a middle of a round of stops, it changed the complexion of the race. Watts ended up getting suspended by NASCAR for four weeks because of it.

On Sunday, FOX more or less did catch the wheel getting away from Tyler Reddick’s crew in real time. Larry McReynolds stated that NASCAR would throw a caution to retrieve it, while Jeff Gordon noted that NASCAR would wait until the cycle completed. Bowyer agreed with Gordon.

However, the longer it continued on, the booth thought that NASCAR was going to leave it there. As soon as they started into McReynolds’ trends, NASCAR threw the yellow for the wheel. After all, it had been there for 10 minutes by then. The whole situation came off as looney, to be honest.

There was a somewhat similar scenario in Sunday’s Fanatec GT World Challenge America Powered by AWS race at Circuit of the Americas when Compass Racing’s Rodrigo Sales lost his right front wheel during the pit window immediately after a stop.

What happened? It seems like the wheel nut on the right front wheel backed off of the Acura. As a result, there was nothing keeping it on the NSX. Sales had no prayer of making it the 3.427 miles to get back to the pits and get another wheel on the car. At the time this happened, there were still a few teams that hadn’t made their mandatory pit stops.

As a result, SRO America officials chose to hold off on retrieving the wheel and Sales’ Acura until after the window closed. Why? They wanted to prevent a similar scenario to what happened at Canadian Tire Motorsport Park in 2017, where Jordan Taylor and Michael Cooper ended up effectively a lap ahead of the field due to an ill-timed caution. It more or less gifted them their only SprintX victory of 2017 en route to the championship.

Sports car racing aside, NASCAR did what they did Sunday to prevent the race from being irrevocably changed. It was just significantly elongated as compared to normal. Having said this, I don’t think this would have happened had this been an ARCA race.

Sunday’s race was maybe not the most exciting event to watch. Especially early on, you didn’t really get to see all that much action. You heard about Larson charging up from 32nd to challenge the leaders in the first stage, but you really didn’t see much of him until he got to the top 10.

Unlike a number of races, you saw more and more racing for position as the race went on. That was at least partially due to more cautions late in the event. However, there was some action to be had.

The early pit penalty that was given to Ryan Newman‘s team was a little unusual. Had there still been regular officials over the wall, that would have never happened. However, I don’t understand why NASCAR waited until after the restart to apply the penalty. Made it more punitive than it should have been.  he camera system that NASCAR uses for officiating would have caught that right away. It may not see lug nuts, but it sees everything else. FOX Sports 1 didn’t catch it at first, but replays showed the extent of the violation. You’re not slick. Don’t try those shenanigans. NASCAR will catch your butt.

Overall, this was a fairly normal race, broadcast-wise. I just wish that they could do a better job showing how drivers move up through the field. It seems like it’s always X starts in the 30s, blink your eyes and he’s 12th.

That’s all for this week. Next weekend is Mother’s Day. For many years, this was a traditional outright off-week. With NASCAR taking two weeks off this summer for the Olympics, that isn’t really possible this year. Instead, we have Throwback Weekend at Darlington, which includes the first Cup race that I can honestly remember being run on Mother’s Day. They’ll be joined by the Xfinity Series and Camping World Truck Series. Formula E will be racing in Monaco as well. TV Listings will be in the Television drop-down above.

Next week’s edition of Couch Potato Tuesday here at Frontstretch will cover Sunday’s Goodyear 400 and additional action from Darlington. The Critic’s Annex in the Frontstretch Newsletter will cover at bare minimum Saturday night’s Wise Power 200 for the Camping World Truck Series.

Good article as always Phil. I agree not one of the better races for Kansas. Tired of thee real load background race noise on the Fox broadcasts. Tried to email Fox but the link didn’t work. The background noise is so loud it is hard to hear announcers.

Tom B
Reply to  Sue

Not much to hear but them repeating what the other guy said and lots of buffoonery.